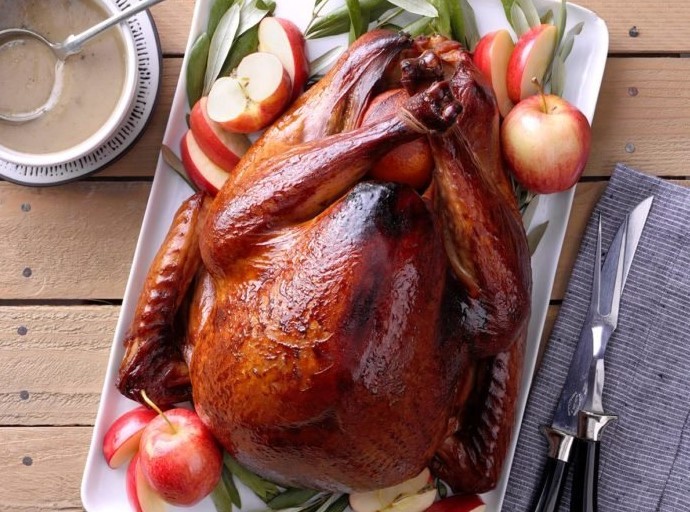 It's Thanksgiving And Your Turkey Is Frozen. What Now?

Thanksgiving is just around the corner, and now is the time to start prepping your Turkey Day bird, said James Schend, deputy editor of "Taste of Home" magazine based in Milwaukee.

To get the turkey as juicy as possible, allow your thawed bird at least 24 hours to sit in the refrigerator in a brine made of brown sugar, apple juice and salt.

"Over those 24 hours, the salt and water and sugar are going to interact with the turkey, and you're going to start pulling more of that liquid into the turkey," he said. "So your juicy bird is going to end up coming out of the oven and it's just going to be incredible."

Once the bird has soaked in the brine, take it out of the refrigerator, pat it dry and allow the bird some time to reach room temperature — which takes about an hour. Then, put it in the oven.

"All that salt and the sugar is not going to overpower the bird," Schend said. "You're not going to end up with a bird that tastes excessively like salt. It's just going to be very, very juicy."

But My Turkey's Frozen

Say you get distracted and don't have time for a full day's worth of brining. Say the hours are ticking down to the Thanksgiving meal and you still have a frozen turkey.

If you have some extra time, put the bird in a large sink filled with cold water, and make sure to change the water every 15 to 20 minutes. You want to avoid the turkey getting up to room temperature.

If you don't have extra time, you'll still be OK. Take the turkey out of the freezer, put it on a roasting rack and stick it in the oven. It won't be nearly as beautiful as one exposed to more preparation, but it still ends up being very juicy.

Schend, who has roasted a frozen bird, said the bake time takes about 50 percent longer than with a thawed bird. There's also some maintenance required. After about an hour of cook time, when you're able to move parts of the turkey around, see if you can grab the giblets and the neck and everything else in the cavity of the bird.

"Don't force it; just give it a little bit of time," he said.

Also, at this point you're in damage control mode, so don't worry about seasoning the turkey. Most birds purchased at a supermarket have quite a bit of seasoning, anyway.

Schend said one of the biggest complaints he hears is that the turkey is too dry.

One major culprit? Cooking stuffing inside the turkey. Schend said that "Taste of Home" has actually stopped publishing recipes that include stuffing the bird with dressing.

Poultry needs to meet 165 degrees to be safe to eat. When the bird's juices seep into the dressing, that means the dressing also has to rise to that temperature. But then the meat around the dressing rises even higher, sometimes to 180 degrees or more, which dries out the turkey.

Schend recommended that unstuffed turkeys be roasted to about 170 to 175 degrees in the thigh. That usually translates to 165 degrees in the breasts, ensuring a perfect bake.

He also recommends keeping the oven door closed the entire time it's roasting so you're not cooling down the oven with each peek inside.

Schend said he's not a fan of basting, or pouring liquid over the turkey. For one, it cools the oven down because you have to open it. Secondly, the liquid is at a temperature of about 212 degrees, which is going to cool down the turkey that sitting in a 325-degree oven.

"You think it's going to add moisture and it's not doing that either, because it just rolls right off the turkey," he said.

What Does Schend Do?

If you'd rather copy the professionals, do as Schend is planning.

He's going to cook his turkey on Wednesday instead of Thursday, which he knows is heresy for a lot of folks.

After it cooks, he'll plan on letting the turkey cool down and come to room temperature, and then he'll put it in the refrigerator.

Thursday morning, he'll slice it, put it in a roasting pan with stock and cover it up. He'll put it on the stovetop and bring the stock to a simmer and then let the turkey sit for 10 or 15 minutes.

There is a downside to this method, though. He said the skin won't be as crispy as it would be right out of the oven. But it does create more space in your oven for other dishes offset a less-crispy bird.

"Everything can be done pretty much ahead of time and then it's just about time management the day of," he said. 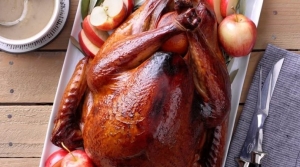 Forgot to thaw the turkey out? Our guest has a hack for that. We get a crash course on how to cook — and impress — for the holidays with a guest who trades in the tasty-but-simple, and grab a few recipes along the way.