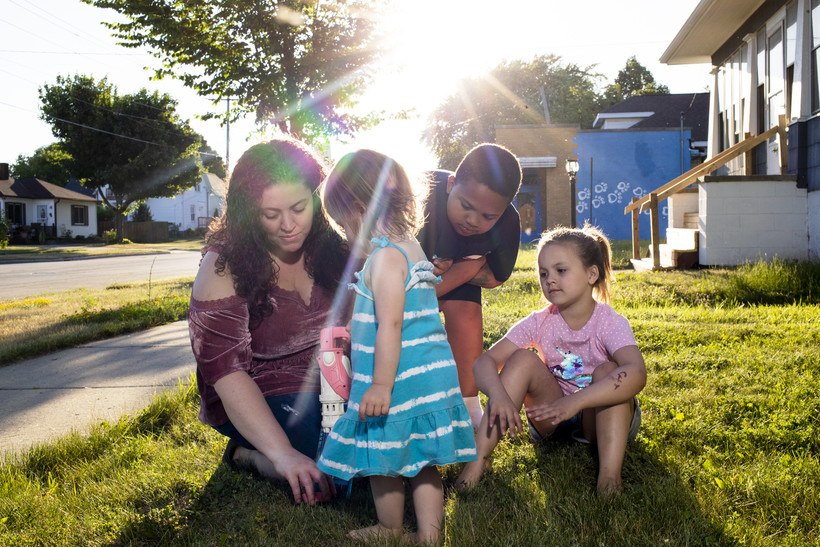 Jaleesa Gray plays with her children outside her home on June 15, 2021, in Green Bay, Wis. Gray struggled financially for many years before becoming a homeowner. People like Gray who have received public benefits run the risk of losing them if they make too much money. Samantha Madar/USA TODAY NETWORK-Wisconsin

'It’s All Or Nothing': A Small Pay Bump Can Cut Benefits For Wisconsin Workers

A 25-Cent Raise Threatens Loss Of Benefits For Some Low-Income Families, Making It Hard To Get Ahead
By Nusaiba Mizan | Green Bay Press-Gazette
Share:

Owning a home once seemed like "an impossible dream" to Jaleesa Gray, though she began thinking about it when her son was born a decade ago.

Now that she finally has a home, she sees possibility everywhere.

She could paint her bedroom a calming light blue, the bathroom lavender, and the kitchen white and blue, like in a country home. She can modernize the house while keeping its charms, like the old doors and crown molding. After years in rented apartments, she can watch her children create their own spaces.

Up until two years ago, Gray was moving nearly every year. Twice, she lived in House of Hope, a Green Bay shelter for women and children. She steadily worked and improved her credit score, but she had another setback when the pandemic hit, and she had to quit her job at a call center to care for her children.

And even as she worked to recover from that setback, she faced another problem: Because she receives food stamps and day care assistance — and because those vital benefits go away once she earns a certain amount of money — she had to make sure she didn’t make too much money when she returned to work.

For many people, a small increase in pay can mean a disproportionately greater decrease in benefits. This effect, called the "benefit cliff," makes decisions about a new job or career advancement difficult.

"If I lose daycare assistance, I lose daycare, therefore I lose my job and I start back at nothing. And then I could lose my home," Gray said. "People don’t realize that that cliff and losing one assistance — especially day care — it’s huge. And a 25-cent raise isn’t going to pay for $1,700 in day care a month."

With a workforce shortage affecting some industries, employers are raising wages to attract workers. Low-income workers have a better opportunity to reduce dependence on benefits and increase wages, as long as they find pay high enough to survive loss of benefits caused by the benefit cliff. Jaleesa Gray, 28, poses for a portrait outside her home on June 15, 2021, in Green Bay, Wis. After years of dreaming of owning a home, Gray finally got her wish. But she had to guard against "benefit cliffs," the point at which even a small increase in income can cause a recipient to lose needed government assistance. Samantha Madar/USA TODAY NETWORK-Wisconsin

While the $7.25 an hour minimum wage in Wisconsin has not increased, employers are offering higher wages as the economy picks up and workers are in short supply. This is due to a pandemic economy in flux, increased retirements and more.

University of Wisconsin-Madison economics professor Timothy Smeeding said the rise in wages for low-income workers means it’s a good time to reassess their jobs and find a better one.

"For those reasons, the job market is in favor of workers right now and turnover is good," Smeeding said. "When people voluntarily leave jobs, economists think that’s good, because that meant they found something better."

This is especially true for those receiving government assistance for necessities like food, child care or housing. Rising wages give these workers the overdue opportunity to increase their financial independence.

However, pursuing higher-paying jobs or wage increases may bring financial stress in the short term because of the cliff effect, in which a small increase in income can lead to a disproportionately larger loss in benefits.

"Especially for lower-income individuals ... this can be a real issue," said David Altig, director of research at the Atlanta Federal Reserve. "In the worst case scenario, it actually impedes people’s progress from a pathway to higher income."

The Atlanta Federal Reserve is working on a "cliff calculator" to help people predict where income cliffs are, depending on their household size, job type, location and benefit programs.

Altig said in the long run, there’s no question rising wages are good for workers and save taxpayers money.

Saying 'No' To A Pay Raise

Dahlke, a former resident of the Green Bay shelter House of Hope, works with residents at area homeless shelters to find jobs. But negotiating income for shelter residents is tricky. It is often safer to make less and remain on assistance than it is to make marginally more and lose the assistance altogether.

Dahlke estimates about a third of her homeless clients need to negotiate pay within a low range just to keep benefits.

"We have a large population of individuals who are limited to only being able to make $13 to $14 an hour," Dahlke said. "Because if they make 25 cents more an hour, they’re going to lose their health insurance, lose their housing, their everything."

Dahlke got her staffing job while living at House of Hope. She got a $1,000-a-year pay increase, which meant she lost $800 a month in food assistance. The budget was a little better, but it was still tight.

"Our system doesn’t give us grace to improve our life," Dahlke said. "It's all or nothing."

Despite that, there’s national-level research indicating people will likely prioritize the pay raise over the loss in benefits.

"By and large, people want to work more, and they're not placing benefit receipt and changes in those benefits front and center when making that decision about working more," Maag said.

While the exact cliff depends on a household's location, size and the type of benefits received, a 2020 analysis by UW-Madison researchers found cliffs exist for a family of three earning between $21,960 to $32,940 or as high as $43,290.

Analysts ran this calculation for hypothetical households in Milwaukee, Dane and Chippewa counties.

For example, Wisconsin residents commonly hit a cliff when they lose full coverage of BadgerCare Plus and enter the Affordable Care Act marketplace for health insurance. This may be at 200 percent of the federal poverty line in Milwaukee County and 300 percent in Dane and Chippewa counties.

Grace George, a researcher on the report, said the program with the worst benefit cliff is Wisconsin Shares, which subsidizes child care for working parents. The 2020 UW-Madison analysis indicated families hit a cliff when household income rises to twice the federal poverty level. Every $3 increase in income for these families results in a copay increase of $1.

However, a spokesperson for the state Department of Children and Families said family copayment is based on household income at the time of the annual renewal, and it remains stable for 12 months. It cannot increase before the next renewal, but if household income decreases, the copay will also decrease.

Surviving Cliffs Is A Challenge

Every Monday, about 30 or more people gather at Green Bay Community Church. The meetings begin with attendees forming a circle and each person sharing something new and good in their life, often to the chorus of good-natured laughter and cheers.

Members of Circles Green Bay are provided resources, programming and allies for financial responsibility. They are all aiming for the same things: to increase their income and decrease their reliance on benefits.

"I think that’s the prevailing problem, is that there’s uncertainty," Schmohe said. "We always call it like, 'Trying to shoot the gap.' Because there’s the cliff, and then there’s the other side of the cliff. So what’s the wage that’s needed to shoot over the cliff, so that you actually don’t get affected by it?"

Many of the people who join the Circles program are seeking meaning, friends and connection — the same social connectedness that advocates find integral to housing and financial stability.

Earlier this summer, at a gathering in the church’s garden, Schmohe and Circles coaches commended the graduating cohort.

Gray feels thankful to be a part of this community, which encourages her to dream of a better life. 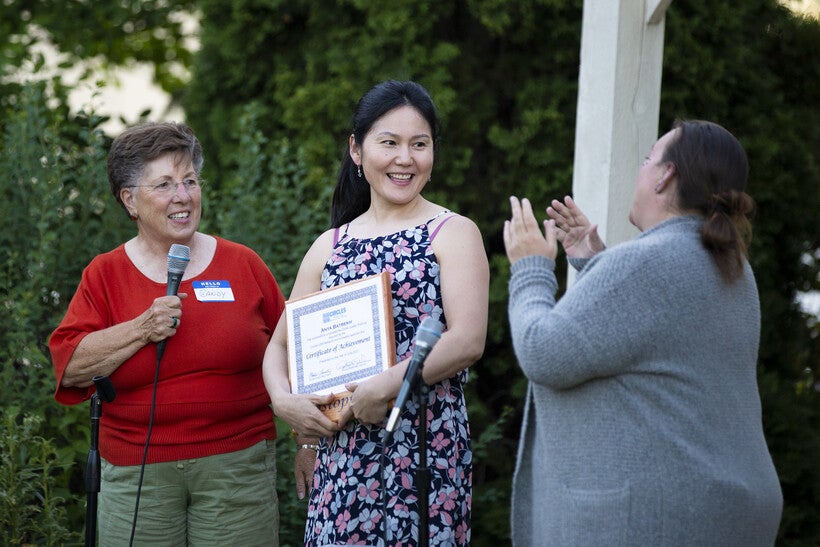 Contact Nusaiba Mizan at (920)-431-8310 or nmizan@gannett.com. Follow her on Twitter at @nusaiblah. This piece was produced for the NEW News Lab, a local news collaboration in Northeast Wisconsin.