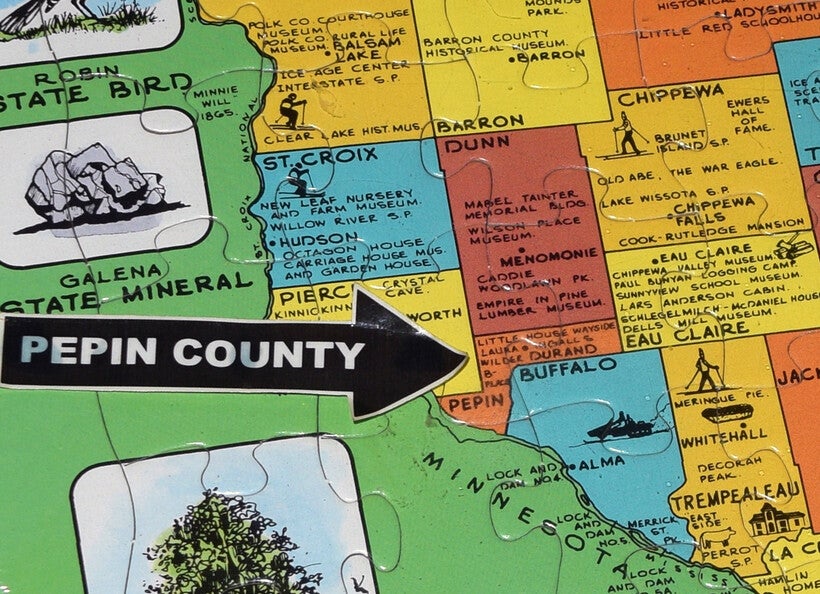 In the shape of a square root symbol, Pepin County was carved out of Dunn County to the north, which originally was part of a much larger Chippewa County. Liz Dohms-Harter/WPR

It 'Looks Like A Square Root Symbol': How Pepin County Got Its Shape

First Part Of Chippewa County And Then Dunn County, Pepin County Was Established In 1858
By Elizabeth Dohms-Harter
Share:

There is a sign hanging in the hallway of Pepin County’s Old Courthouse Museum and Jail that reads in big bold letters: "Four reasons Pepin County should not be a county."

It was written by two lawmakers adamantly opposed to the creation of Pepin County in western Wisconsin.

The men argued the county would be too small and would make taxes exorbitant. It’s shape, they wrote, would have people questioning the reasons for its creation. Two Wisconsin Assemblymen fought against making Pepin County a county, but effectively lost the argument. On this sign, hanging in the Old Courthouse Museum in Durand, are their four reasons against it. Liz Dohms-Harter/WPR

"The shape or form of the new county is such as necessarily, at first look, must strike every one of the impropriety of a division; an eye upon the map will speak a loud language," Mesch read from the excerpt, admiring the Victorian prose.

To Joe Hackbarth, it looks kind of like a square root symbol.

Hackbarth is a physical education teacher at La Crosse Logan High School who happened to notice Pepin County’s shape when looking at a map of Wisconsin he has hanging in his garage.

"I should probably say I have nothing against Pepin County, but I saw the map and (thought) the shape of this county looks like a square root symbol, and it's super tiny, and it just struck me as ... kind of curious," he said. "Why does it exist?"

Hackbarth wrote in to WPR's WHYsconsin looking for the answer. As it turns out, it traces back to before Wisconsin became a state.

"It really owes its shape to the fact that when the state was created, Pepin was part of what was then Chippewa County, which at that time was a much larger entity than Chippewa County is today, and included modern Eau Claire County, Dunn County, Rusk County and a bunch of other ones," said Howard Veregin, the state cartographer.

For the record, Veregin thinks the county looks like the state of Massachusetts.

"In my opinion, because I tend to look at things in terms of map shapes and so on, it looks like a mirror image of Massachusetts, but flipped over, and about 2 percent of its size," he said.

Veregin, whose office is part of the University of Wisconsin-Madison’s geography department and whose position is mandated in state statute, explained the original southern edge of early Chippewa County bordered the Mississippi River. It fanned out to the northeast, almost reaching present-day Iron County on the state's northern border.

Chippewa County was one of 28 counties already established before Wisconsin became a state in 1848, Mesch explained, pointing to a map showing a large swath of land that contained Chippewa County. 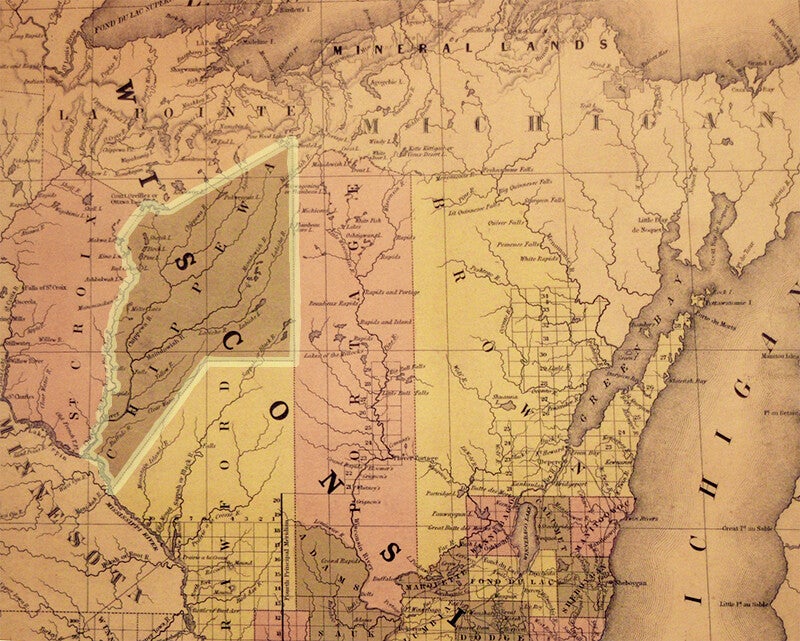 Chippewa County’s original borders in Wisconsin used to reach as far north as today’s Iron County and as far southwest as the Mississippi River. On this map, Chippewa County is represented in green in northwest Wisconsin. Liz Dohms-Harter/WPR

The Creation Of Dunn County

Hackbarth guessed Pepin County was formed out of the surrounding counties.

"Because of its interesting shape, someone must have had some clout...and crafted some area from some of its neighboring counties and for some reason decided to make this county up there in that part of the state," Hackbarth said.

He was right, though Chippewa County would have to be transformed first.

Chippewa County's large size posed some problems for its residents who lived far from the county seat, Chippewa Falls. Services and resources were dispatched from there throughout the county by horse in the 1850s.

The area where Pepin County is now would have been a two-day ride away from Chippewa Falls.

That sort of distance was a strain on communities, and in particular, on law enforcement. While local municipalities waited for judges to make their circuits through the county, they had to care for their prisoners.

"You might have to hold this prisoner for a long time," Mesch said. "You had to feed this person; you had lots of expenses. The closer you were to the seat of justice, the sooner you would get service. That’s what drove the creation of smaller and smaller counties." 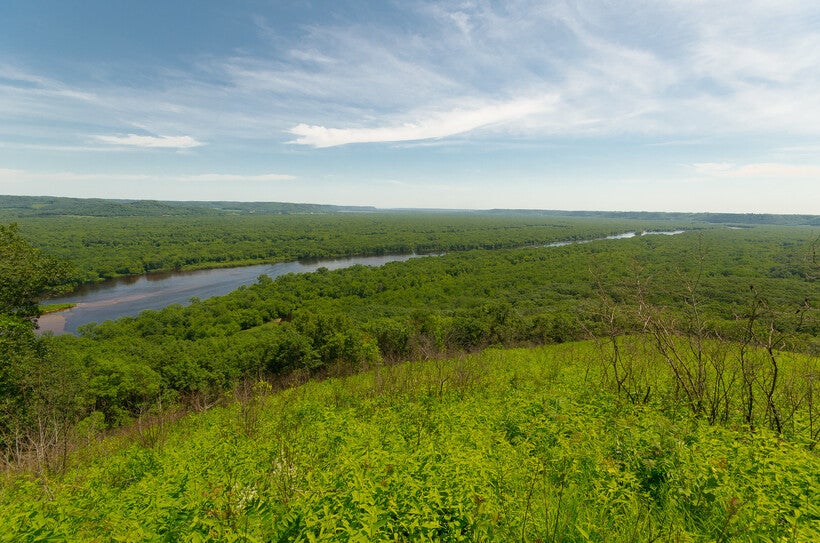 By 1854, several businessmen stepped onto the scene to advocate for carving up Chippewa County into smaller counties. One of them was a man who carried a lot of clout, just as Hackbarth predicted.

William Boyd Newcomb was among a group of men who traveled to Madison to petition the Legislature to create Dunn County, west of Chippewa County. Its county seat would be Dunnville — only 20 miles from the Village of Pepin, located within the Town of Pepin — as opposed to Chippewa Falls, which was 50 miles away. The Old Pepin County Courthouse was built in 1874 in Durand and contains the museum where Terry Mesch spends time as the volunteer coordinator. Liz Dohms-Harter/WPR

Newcomb was invested in the resource-rich river valley area. In the 1850s, he surveyed and platted the Village of Pepin, in Dunn County at this time, which quickly grew to become an important hub for commerce because of its close access to Lake Pepin and to the Chippewa River, which simplified access to northern Wisconsin. His home was the first built in the village.

Mesch, who has written detailed histories of Pepin County and the Old Courthouse Museum and Jail, writes in one account that elected officials of large counties felt pressure to get services to their constituents quickly. This led an influx of petitions of the Legislature for making smaller counties.

Standing committees were established to manage these requests in both the Wisconsin Assembly and Senate.

Dunn County was approved quickly, and Newcomb became known as the father of Dunn County. Within a few years, he'd earn that title for Pepin County, too.

After Dunn County was established in February 1854, the Legislature set a date for elections for county positions. Outlined in yellow is the boundary of Dunn County before 1858, when Pepin County was formed. The land of two townships in the southern part Dunn County — Pepin, shown in blue; and Bear Creek, shown in orange — would eventually become Pepin County. Graphic by Liz Dohms-Harter. Map courtesy of the Wisconsin Cartographer's Office.

But Dunn County, like lots of fledgling counties, had a hard time getting its government established.

"A lot of the counties had difficultly putting themselves together because not everybody was well-educated, a lot of people didn't speak the same languages, things like that," Mesch said.

After two years, Dunn County successfully divided itself into seven townships, with Bear Creek and Pepin making up the sourthern portion of the county. By 1857, Newcomb, among others, were calling for the borders of these two townships to become Pepin County. At that time, the Town of Bear Creek was to the east of the Chippewa River and the Town of Pepin to the west.

"William Boyd Newcomb merely asked for the severing, the cutting off, of these two townships and forming them into Pepin County," Mesch said.

But, why? According to Mesch, "His feelings got hurt." 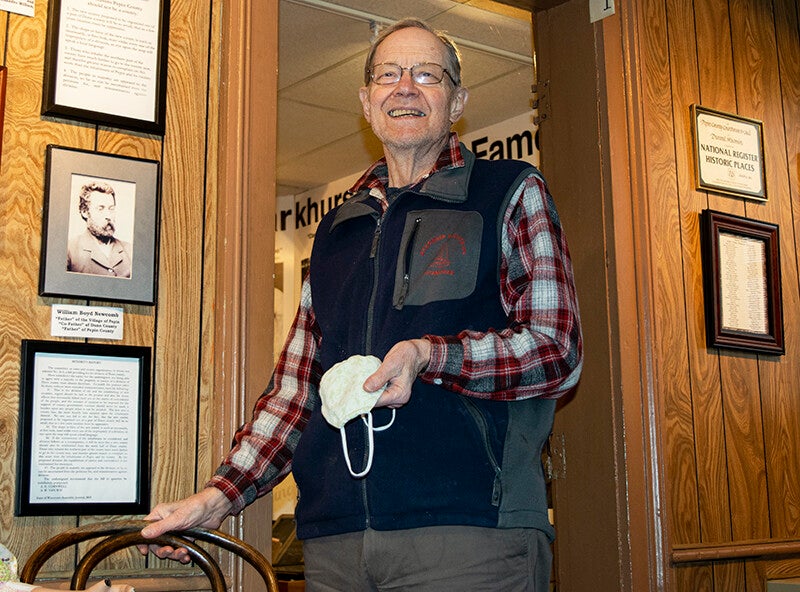 Terry Mesch, volunteer coordinator of the Old Courthouse Museum in Durand, poses next to a framed picture of William Boyd Newcomb, the "father" of Dunn and Pepin counties. Liz Dohms-Harter/WPR

After the election of 1854, a register of deeds was elected but ended up not being able to serve his term. It's not clear exactly why. Newcomb was appointed to the position, and he expected to serve for the entire term, which ended in 1856.

But because Dunn County was struggling so much to get established, the Legislature stepped in and set a new election for November 1855, a year before the terms set by the previous election expired.

In that election, a man named Samuel French was elected the new register of deeds for Dunn County, effectively ousting Newcomb. Frustrated he got booted from his position before the end of his term, Newcomb set his sights on a new Pepin County.

Some residents of the Bear Creek and Pepin townships were against the creation of a new county. Two lawmakers, Reps. A.D. Cornwell and A.W. Van Wie, referenced that in their statement that was printed in the Assembly Journal and now hangs in the museum.

But their efforts failed to gain traction. Pepin became a county on Feb. 25, 1858.