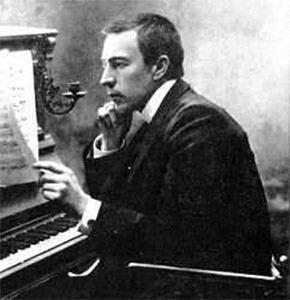 Eighteen-year-old Sergei Rachmaninoff was hoping that his opera Aleko would make his reputation as a significant composer, but that major effort was quickly overshadowed by a miniature piece of music–his Prelude in C-sharp minor.

The year was 1891, and as a recent graduate in music theory from the Moscow Conservatory, Rachmaninoff was scrambling to make a living.  He had no great confidence in his opera, and the delay of payment for its publication had made him glad to accept an invitation to play a set of piano pieces for the Electrical Exposition in Moscow for a fee of 50 rubles. He played the first movement of Anton Rubinstein’s D minor piano concerto and a group of solo pieces, including a Berceuse by Frédéric Chopin and Franz Liszt’s transcription of a section from Charles Gounod’s opera Faust.

But one piece from the concert went on to attract attention to last a lifetime.  It was one of Rachmaninoff’s own--his slender Prelude in C-sharp minor.

A reviewer remarked at the end of his commentary that the prelude “aroused enthusiasm.” It continued to do so. With its powerful opening of descending chords and Slavic brooding, it quickly became an international favorite in concert performances and piano lessons alike. Rachmaninoff dismissed its creation, saying, “One day the prelude simply came to me and I wrote it down.  It came so forcefully that I couldn’t shake it off despite myself.  It had to be and so there it was.”

The more audiences demanded the Prelude in C-sharp minor, the more Rachmaninoff began to resent the piece, which he started referring to as “It.”  At the end of a concert, yielding to the audience’s demand for the prelude, he would pound “It” out with a violence borne of resentment, which only made the prelude that much more memorable, so that “It” soon became synonymous with Sergei Rachmaninoff.