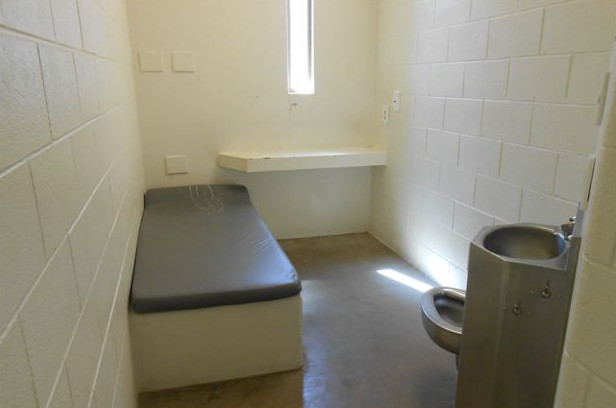 An unoccupied cell in the segregation unit at Waupun Correctional Institution. Photo courtesy of the Wisconsin DOC.

A new report from the Wisconsin Center for Investigate Journalism raises questions about the effectiveness of keeping inmates in isolation for long periods of time.

The report documents six cases in Wisconsin where guards pepper-sprayed or used stun guns on inmates in segregation cells after they cut themselves with pieces of sharp metal, or tried commit suicide by overdosing on medication or hanging themselves.

The report also quotes a letter from Waupun prison warden William Pollard saying changes have been made in segregation rules to ensure the health and well-being of inmates, including regular visits from medical staff.

Former Department of Corrections Secretary Rick Raemsich now heads the Colorado prison system, where he’s making changes in the use of segregation to discipline inmates.

“What I had done here was not only reviewing those who were in segregation, but examining why people were put there to begin,” said Raemisch. “Of course. a portion of that was removing the mentally ill from administrative segregation.”

Raemisch decided that in some cases, segregation was making inmates’ mental illnesses worse.

“In a sense, we were holding people responsible for things that they didn't really realize what they were doing because of their mental illness,” he said. “They were ending up in administrative segregation for very lengthy periods of time, and we put an end to that practice.“

Another former Wisconsin prison director, Walter Dickey, said any changes to the current use of segregation should include incentives for good behavior.

A “Little Slice in the Seg Building”

That's a philosophy that the current DOC Secretary Ed Wall shares. At a recent meeting of the Criminal Justice Coordinating Council, he reassured members of a prison reform group that he's committed to making changes in the use of segregation.

“We have some extremely violent people, but it if you look outside the United States to places like Sweden and others where segregation is actually a very focused metal health and programming facility, that's where I really think we need to head,” said Wall.

The guards who work in these units aren't sure about the proposed changes to the system. Brian Cunningham heads the statewide correctional officers union. He said the reforms are based on advice from people who have never worked as guards and don't understand why officers sometimes have to use force.

“All these national experts (should) put the shirt on — come on down, get your hands dirty, get into seg,” said Cunningham. “Have an inmate swing on you and now try to sit back and tell me … what you think.“

Cunningham said it doesn't make sense to try to reform the prison system by only focusing on segregation and ignoring what's going on outside the prison.

“Are we going to make sure that these inmates have the things that they need on the street before they get to prison in the first place? Because if we're only going to have this conversation about this little slice in the seg building, it's a waste of time,” said Cunningham.

Members of a growing prison reform movement are demanding more funds for social programs that keep people out of prison, but they say they’ll also keep pushing for reform of segregation inside the prison.