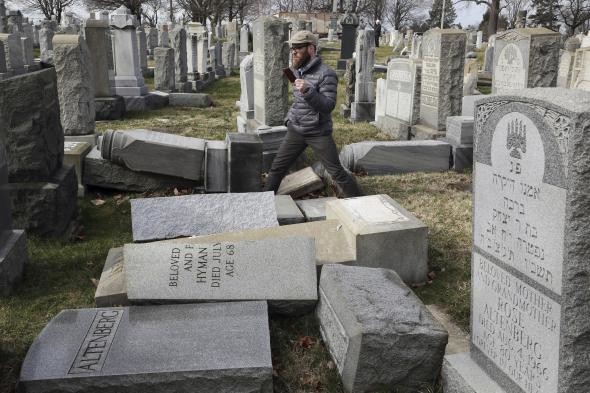 Interfaith Groups Come Together To Stand Against Uptick In Hate Incidents

Interfaith groups from around the United States, including in Wisconsin, are coming together to rebuke the sharp uptick in hate incidents against the Jewish community.

The Southern Poverty Law Center is reporting that another Jewish cemetery has been vandalized in Rochester, New York. It’s the third such attack in a little more than two weeks, and follows incidents in Philadelphia and St. Louis.

The vandalism coincides with a huge spike in the number of bomb threats called in to Jewish community centers across the country and Canada. Sine early January, more than 100 such threats have been made by phone or email across the United States and Canada, according to the Anti-Defamation League.

On Tuesday, the Jewish Community Center in Whitefish Bay was forced to evacuate after receiving an overnight bomb threat. It was the third threat in the past six weeks.

CNN reports there was a wave of threats Tuesday against Jewish sites in Georgia, Maryland, Massachusetts, New York, Oregon and Washington.

In the midst of political turmoil and the flood of recent hate crimes, citizens from all backgrounds of faith have been coming together to show their support.

After seeing images of the toppled Jewish tombstones in St. Louis, Tarek El-Messidi, a Muslim-American director of Celebrate Mercy, a nonprofit organization promoting a better understanding of the Prophet Muhammad, decided he couldn't stand by and do nothing.

"It was really disgusting to see that someone could do this kind of cowardly act. There's nothing lower than bullying dead people," he said.

El-Messidi helped launch a crowdsourcing campaign to raise money to repair the 100-plus Jewish graves destroyed. The generosity poured in.

The $20,000 goal was met in three hours. As of Tuesday night, Muslims Unite to Repair Jewish Cemetery, the official name of the campaign, has received donations from more than 4,800 people totaling over $160,000.

Masood Akhtar has been leading a uniting movement in Madison. The Indian-born Muslim-American entrepreneur has been living in the state's capital city for more than 30 years and actively involved in many community projects. He recently created the We Are Many: United Against Hate campaign to bring together people of different backgrounds.

Akhtar said he decided to launch the effort in response to some of the hateful rhetoric he heard during the 2016 presidential campaign, particularly the call for a Muslim registry from then-candidate Donald Trump and his surrogates.

"The idea behind creating this kind of movement was to unite all of these communities who are subject to hate, to work together, to get united," Akhtar said.

Akhtar emphasized the coalition has gone out of it's way to invite Trump supporters into fold, understanding while they may agree with many of the president's policies, they, too, are often against the surging hate incidents.

The response so far from the community has been overwhelming, Akhtar said. A gathering last month was expected to draw 500 people, but nearly 2,500 people showed up at the Monona Terrace.