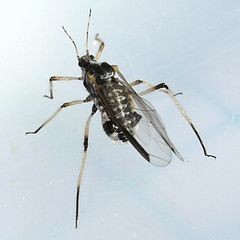 If you find insect hitchhikers on your Christmas tree, they may be a Giant Bark Aphids. This image was taken by Wikimedia Commons user Ilona Loser in Cross Plains, WI.

Insects Are Seeking Warmth -- And That May Mean Inside A Home

Expert: While a Nuisance, Most Indoor Insects Are No Cause For Concern
By Judith Siers-Poisson
Share:

There’s no doubt that at this time of year, a lot of insects find ways to come indoors where it is more hospitable. Those guests aren't always welcome.

But while it can be unpleasant to find unexpected insect visitors in the house, entomologist Phil Pellitteri said that in general, they aren't a great cause for concern. Pellitteri is the head of the University of Wisconsin-Madison Insect Diagnostic Lab.

Pellitteri said that conventional wisdom has held that if a person can find the entry route of the insects and can block it by “structurally caulking, sealing, or what not, you’re done with this and you don’t have to deal with it again.”

But he added that strategies for sealing up outside entry points needs to be used in September or early October to be effective, so if a person is just getting concerned now, that window of opportunity is closed.

At this time of year, the challenge comes when it’s too late to try to keep them out, and the insects have had enough time to really set up house, especially in the walls. Pellitteri said that the homeowner is likely stuck until the insects’ lifecycle runs its course because “there are no magic sprays that will penetrate walls,” Pellitteri said.

If a person sees insects in the home, Pellitteri suggested a dose of “tolerance and understanding."

"They’re really not hurting anything, and you’re not going to have anything other than, occasionally at breakfast, a boxelder bug will show up. I can understand that’s unsettling,” he said. “But, the good news is that it won’t hurt anything.”

Stories sometimes circulate about deer ticks hitching a ride indoors with a Christmas tree, but Pellitteri said that he’s not aware of a proven case of that occurring, and there is no science to support it.

One insect that can end up indoors by means of the cut tree being brought in is a bark aphid. Pellitteri described them as black and large compared to other aphids. They will go dormant in trees in the late fall due to the cold temperatures, but when brought indoors on the tree, they will become active again.

Pellitteri said that people will spot the bark aphids crawling on the pine needles and looking like gnats. He added that they are short-lived and won’t last more than four to five days typically. But if a person wants or needs to get rid of them quickly, “a little soapy water is all you have to use,” he said.

A person can also vacuum them off of the tree. Pellitteri added, “I don’t think it’s worth throwing the Christmas tree out for!”