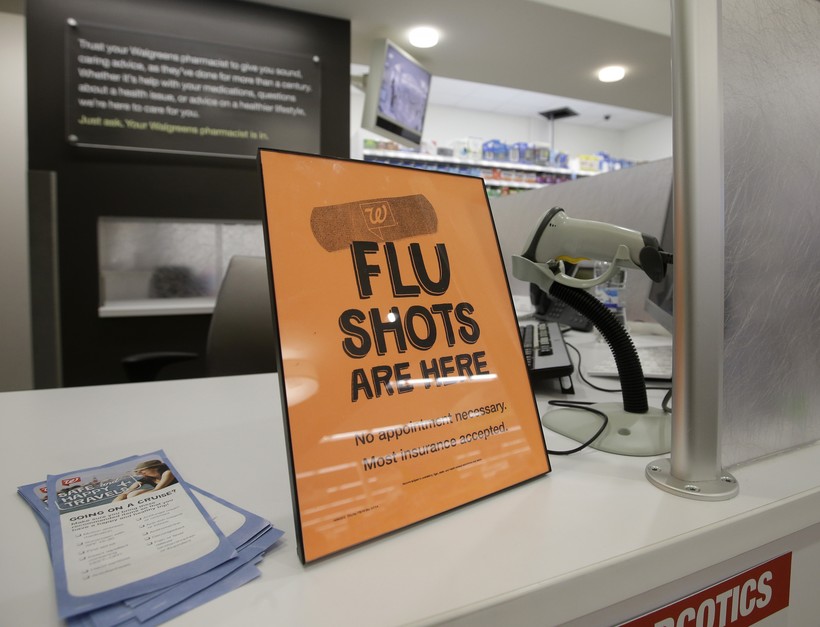 October Is The Best Time To Get Flu Shot, Doctor Says
By Colleen Leahy
Share:

As flu season begins and pharmacies start offering free flu shots, the perennial question of whether or not to get the shot may cross your mind.

Jonathan Temte, physician and professor in the University of Wisconsin-Madison Department of Family Medicine and Community Health, joined WPR's "The Morning Show" to discuss what the flu season might look like this year and why it’s important to get vaccinated.

How is the flu shot made each year?

"The challenge is trying to figure out how many people are going to be affected, and how severe the actual flu strains in circulation are going to be," Temte said.

There are usually four primary strains of the influenza virus that go around each year, so vaccines are made with three and four strains of the virus.

The Centers for Disease Control and Prevention starts looking carefully at the flu each year around the beginning of October, said Temte. Influenza is seasonal, and the CDC tries to anticipate what the flu will look like in a given year by observing how it plays out in the southern hemisphere. Australia, New Zealand and South Africa’s flu seasons can be good indicators on what flu season in the United States will look like about six months later.

Although these predictions are imperfect, Temte said it’s some of the best information available to help anticipate the scope and intensity of a given flu season.

What is the flu going to be like this year?

Illness patterns in Australia have caused concern that this year’s flu season will be worse than a typical year.

"From what we see right now, I think it’s fair to say that we would expect basically an average to moderate influenza season. There was a lot of early speculation triggered by an increase of influenza cases in late August and early September, and in fact, there was an increase in cases across the country. But those have actually receded again," Temte said. "Nationwide, we’re seeing basically an average year right now."

Who should get a flu shot?

Everyone over 6 months of age who doesn’t have life-threatening allergies to the flu vaccine or any ingredients in the vaccine should get a flu shot, Temte said.

A key population that is critical in terms of public health is school-aged children. Temte explains that children have the best response to the vaccination in terms of immunity, and that they’re also the biggest transmitters of the flu.

"In our state of Wisconsin, only about 40 percent of school-age children receive influenza vaccine. So that’s a great unmet need ... We know of at least 100 children this past year that died specifically because of influenza, and most of them had no underlying medical condition, and most of them were not vaccinated," he said.

It’s also particularly important to get a flu shot if you’re pregnant, because pregnant women are at a higher risk for serious complications from influenza, Temte said.

When is the best time to get a flu shot?

Flu season in the U.S. lasts from October through May.

Temte said he favors October for the best time to get a flu shot, but any time from late August into January is OK.

Don’t wait too long into flu season, however, as you may contract the virus before you get around to getting vaccinated, he said.

What are the risks of getting a flu shot?

You also might have a short-term negative reaction to the shot; it isn’t uncommon to experience cold-like symptoms after getting immunized because immunizations trigger an immune response in your body. Because vaccines are a weakened version of a virus, they teach the immune system what to attack by mimicking an infection, Temte said.

Older individuals are at a greater risk for an immune response that manifests as cold symptoms since some of the vaccines for older populations are stronger, he said.

What are the benefits of getting a flu shot?

Getting a flu shot is the most surefire way to avoid getting the flu, Temte said. Although the protection isn’t perfect, without getting vaccinated you have no protection at all.

"Typically for influenza vaccines … (the vaccine efficacy) is about 55 to 60 percent. That means that with a vaccine, you have about a 60 percent less likelihood of coming down with influenza compared to not receiving the vaccine," Temte said.

Furthermore, when you get a vaccine you’re not just protecting yourself. You’re also protecting everyone around you.

How do you know if you have the flu?

If you want to be totally sure, you can get a lab test.

If you’re not positive, a surefire sign you have the flu is the sudden onset of symptoms — going from feeling well to ill in the span of a few hours. If you can pinpoint the specific time you started to fill ill, you probably have the flu, Temte said.