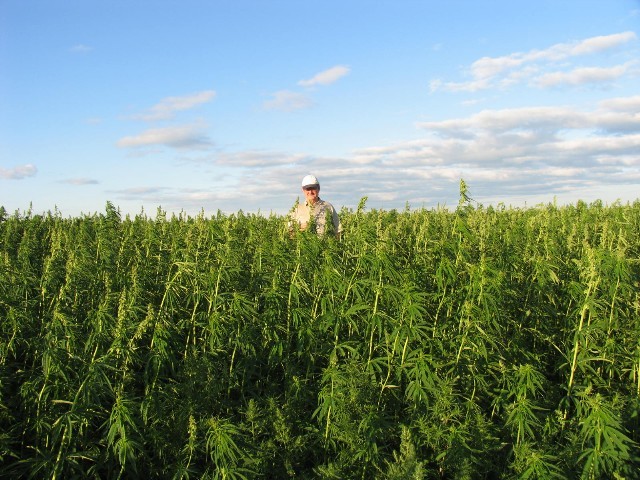 A farmer stands in a field of industrial hemp. Photo: CSLP (CC-BY-NC-SA)

Industrial Hemp Could Return To Wisconsin

Industrial hemp, a plant that's been banned since the 1970s, could once again be grown in Wisconsin ... if the legislature allows it.

To set the record straight, industrial hemp is different from recreational marijuana. Hemp has low levels of THC, the narcotic that gets marijuana users high. Hemp's been used for centuries to make clothing and today is found in lotions, food, and building materials.

Around WWII, Wisconsin was one of the leading hemp producers in the country. It was often used to make rope for the troops. But federal drug laws and the emergence of synthetic fibers brought about hemp's demise.

A provision in the new Farm Bill, however, would allow higher education institutions to grow industrial hemp for research purposes.

Irwin Goldman chairs UW-Madison's Department of Horticulture. He predicts that with time, their researchers will grow hemp.

But in order for research to take place at UW-Madison, the state needs to pass legislation allowing industrial hemp.

A bill was recently introduced in the legislature that would allow the plant's production, but a farmer would have to receive approval from the state. The bill's author says a big hurdle is educating people about the difference between industrial hemp and recreational marijuana.