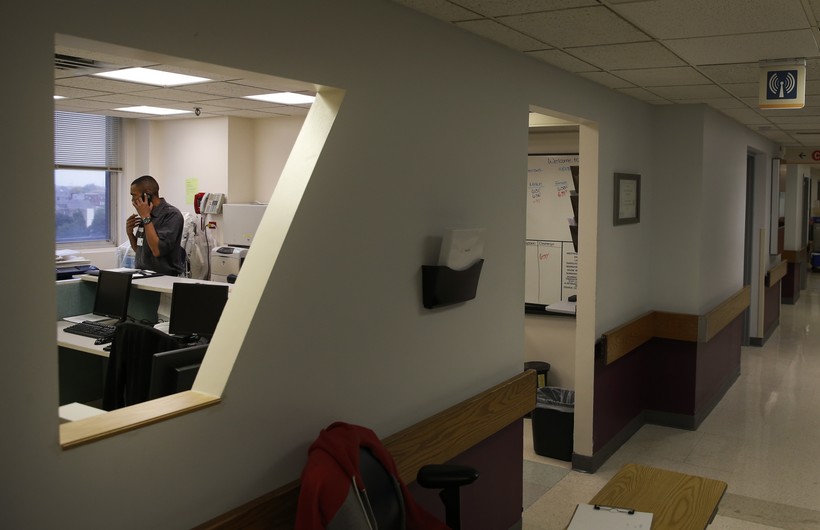 In this Tuesday, Oct. 24, photo, addiction counselor DeValle Williams calls a treatment center trying to find a place for one of his opioid-addicted clients at the nurses station at Saint Anthony Hospital in Chicago. Charles Rex Arbogast/AP Photo

Those experiencing mental health crises in Wisconsin say getting help closer to home could lessen the trauma of being transported far away from friends and family at a time they need them most.

The state runs two psychiatric hospitals, one in Madison, the other in Winnebago. Emergency detentions have increased substantially at Winnebago Mental Health Institute, with emergency detentions in the Northwest region of the state increasing from 5 to 21 percent over five years, according to the Wisconsin Department of Health Services.

Regional services could help, believes Chrissy from Superior, who said she had over a dozen encounters with police for behavioral issues that resulted in reckless driving and suicide attempts.

"One year, I was hospitalized every month but August. In that same year, I was admitted to Winnebago Mental Health Institute from January through the end of May," where she said she was diagnosed with bipolar anxiety and post-traumatic stress disorder. WPR is not using Chrissy’s full name to protect her privacy.

Winnebago Mental Health, based in Oshkosh, is nearly five hours from Chrissy’s home.

"I lost not only my sense of self but eventually my job, my home, my pets ... I was taken away from my daily life and all but one friend," she recalled.

Gov. Tony Evers has proposed regional crisis stabilization facilities be included in the state’s spending plan for the next two years. Chrissy said she believes such facilities would have provided the intensive behavioral services she needed sooner, and would have "given me my life back before I lost everything."

Since receiving the care she needed, she said she's purchased her first home, has a dog and cat and has been employed at the same job for 11 years.

For Brandi of Milwaukee, residential treatment is what helped her recover from a substance abuse disorder.

Brandi, who's last name WPR is not using to protect her privacy, said she started drinking alcohol at age 13 when her parents divorced. She later moved on to prescription opiates and heroin.

The mother of two struggled to find care, and while her mom helped watch her children and find resources, none of them were near her home.

"I didn’t have a car. Taking a bus from one side of the city was challenging in itself, as was just trying to stay sober for a day," she recalled.

Brandi later received residential treatment which helped in her recovery.

Whether these proposals make their way into the state budget remains to be seen. Earlier this month, Republican lawmakers removed 384 of the governor's budget provisions with a single vote during deliberations of the Legislature’s budget-writing committee.

Proposals taken out of Gov. Evers’ spending plan include everything from the expansion of Medicaid, to the legalization of marijuana, to the modernization of Wisconsin's unemployment system.

Possible improvements to the state’s mental health system have not been voted on by lawmakers yet.

"We know that there will need to be some further investments made in behavioral health care," DHS Secretary-designee Karen Timberlake told reporters last week. "We know that we have gaps in our crisis network that we need to close."

All Wisconsin calls will require dialing the area code
In Wisconsin, recall efforts add to pressure on school boards in the wake of COVID-19
Does the IRS really want to spy on your bank account? The latest tax fight, explained
In 'Going There,' Katie Couric lays out her life in intimate detail
Wisconsin apple orchards seeing a shortfall this year