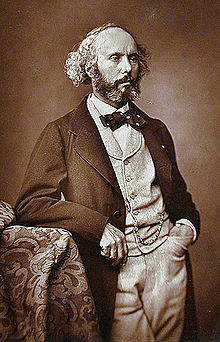 Félicien David is remembered as one of France’s great romantic composers. At the age of twenty-one, he already had a strong sense of romanticism and the hardships that came with trying to make a living from it.

In 1831 David was writing a comic opera, but his financial situation was no laughing matter. He had just lost the financial support of his uncle and was penniless in Paris. David managed to find a few students in harmony and piano, and fell in love with one of them, which left him “dreaming, timid, wondering, and more than a little confused,” according to a friend.

David longed for the recognition that would come with winning the prestigious Prix de Rome, but didn’t apply for it because he feared the loss of self esteem that would come with the failure he thought inevitable, given the back room scheming that affected the outcome of the competition.

When he began to lose pupils, David expressed his romanticism in a worried but light-hearted letter to his sister and brother-in-law

Unless my luck gets better, I’ll be as naked as a rat at the morgue. For some reason my mind has been rather fallow of late, maybe because of my persistent piano practicing. I’m working on some piano pieces–not sonatas--that term is too old. You understand that I’m a romantic. That’s what everyone tells me, even my teachers. Entre nous, it’s true. I have little patience with theory. I’d be delighted to be romantic like Beethoven and Weber–new and original. That’s where my romanticism is. I hope it won’t detract from my severe principles. You would marvel at my chin–dark with a black beard. It’s the secret emblem of the romantic–or at least those who intend to be so.

Félicien David would go on to make a comfortable living as one of France’s great romantic composers.