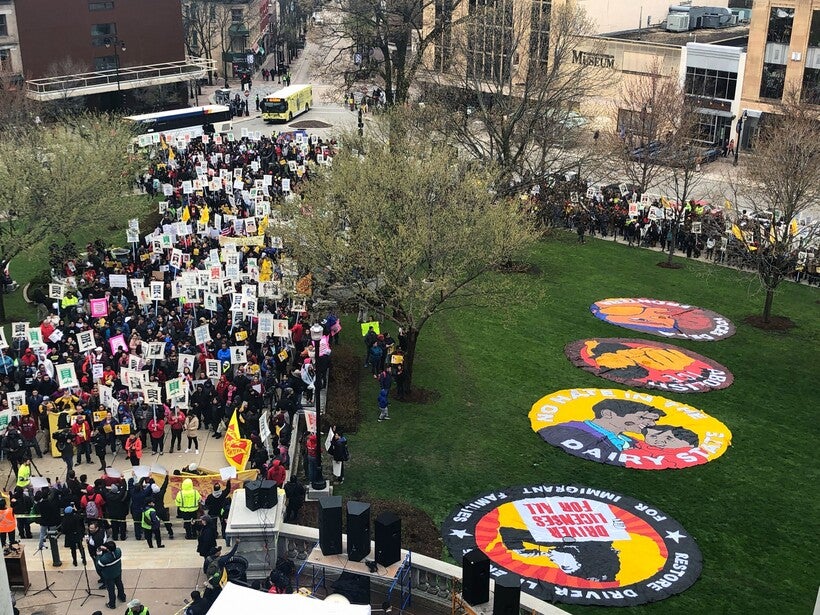 The crowd of rally attendees at the Wisconsin Capitol grows during the morning of Wednesday, May 1, 2019 as immigrants and activists plan to call upon Gov. Tony Evers to make driver's licenses available to people who are living in the United States illegally. Rally organizer Voces de la Frontera says that tens of thousands of people are on strike Wednesday. Laurel White/WPR

Thousands of immigrants and their supporters converged on the Wisconsin Capitol as part of a nationwide day of action to urge Republican support for making driver's licenses available to all, including people living in the country illegally. 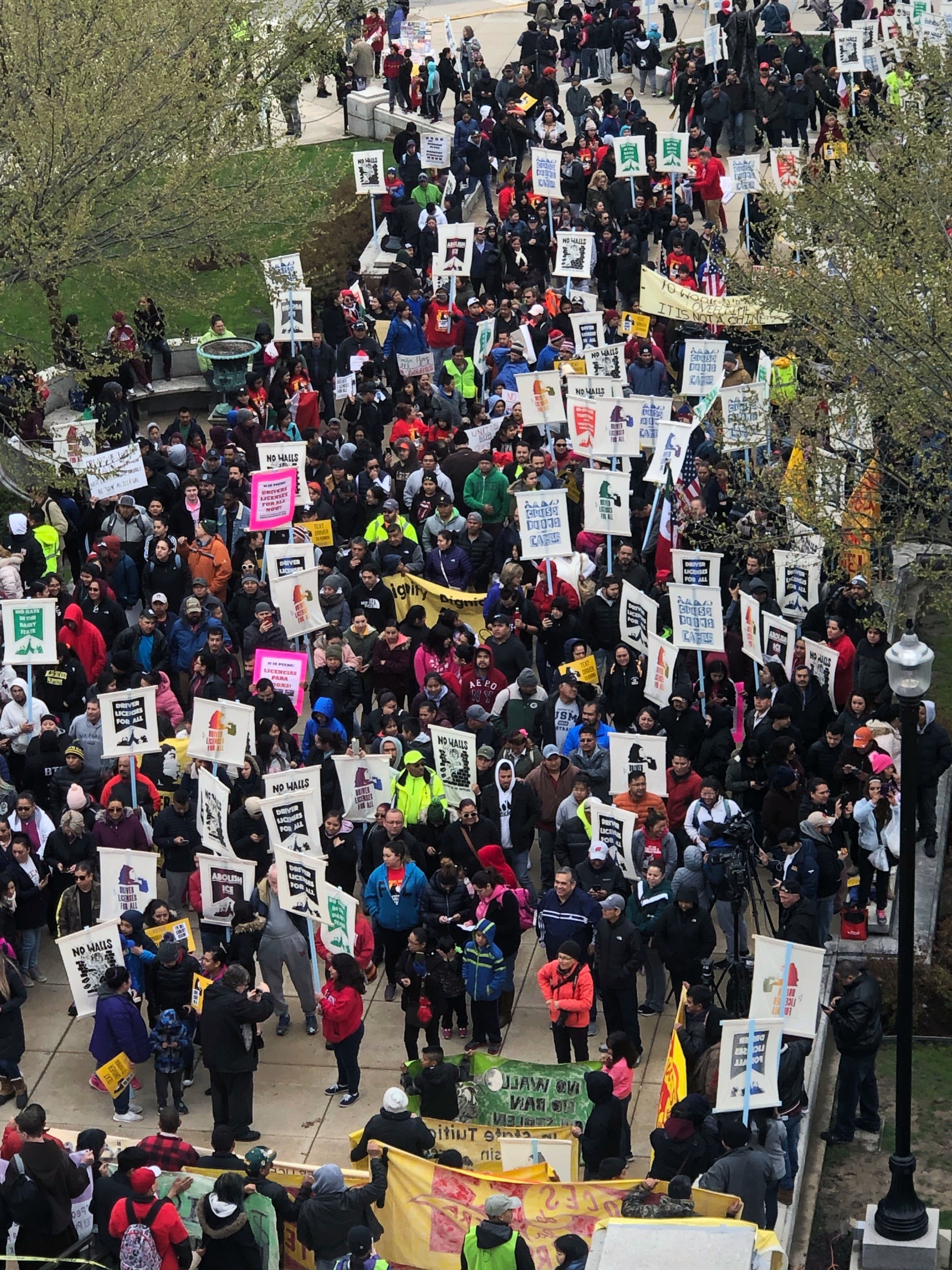 Democratic Gov. Tony Evers has a proposal in his state budget to make driver's licenses available to people who are living in the country illegally. Evers says his proposal is common sense, but he also expects Republicans who control the Legislature to block it.

Buses brought people from 17 cities across Wisconsin for the rally as part of the Day Without Immigrants.

They filled the sidewalks around one entrance to the building, carrying signs saying "Driver's Licenses for All" and chanting "Sí se puede."

People also demanded in-state tuition for immigrants living in the country illegally, which is also in Evers' state budget, and called on Republican leadership to work with Democrats to make the proposal a reality.

Christine Neumann Ortiz is the executive director of Voces de la Frontera, which organized the rally.

"Today we are joined by dairy farmers and dairy workers who work long hours and do work that many people don't want to do, and they are here to demand dignity and drivers licenses for immigrants," Neumann Ortiz said. 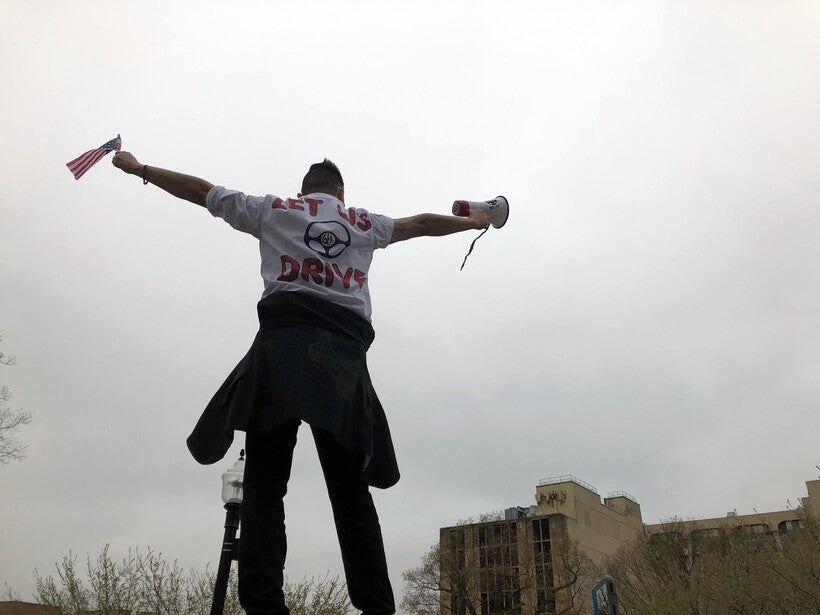 A dairy worker attends a rally Wednesday, May 1, 2019 at the state Capitol where immigrants and activists called upon lawmakers to make driver's licenses available to people who are living in the United States illegally. Phoebe Petrovic/WPR

Madison Mayor Satya Rhodes-Conway spoke to the crowd in Spanish, saying it was "common sense" to make driver's licenses available to all.

She said it makes communities safer and allows immigrants to drop off their children at school and drive to work without fear of being pulled over and detained.

Madison Police Chief Mike Koval also spoke in favor of driver's licenses for immigrants in the country without documentation.

Immigrants without proper documentation could receive driver's licenses in Wisconsin until 2007. That's when the Legislature changed the law to require residents to prove they were in the United States legally.

Voces de la Frontera says tens of thousands of people are on strike Wednesday, forcing more than 175 businesses across the state to close.

"Nuestro sacrificios pasados no han sido en vanos, no serán hoy. Our sacrifices in the past have not been in vain, and they will not be in vain today," Neumann Ortiz said. 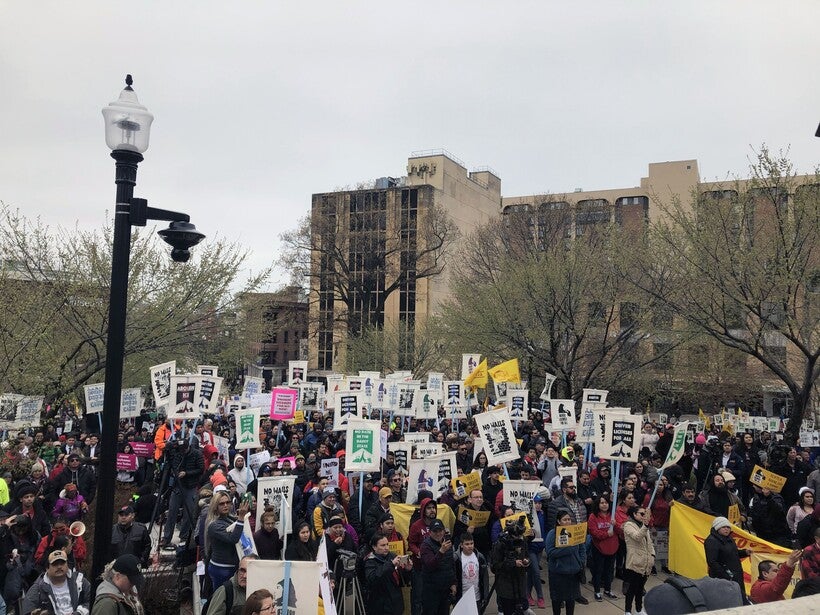 Thousands attend a rally Wednesday, May 1, 2019 at the state Capitol where immigrants and activists called upon lawmakers to make driver's licenses available to people who are living in the United States illegally. Phoebe Petrovic/WPR Thousands attend a rally Wednesday, May 1, 2019 at the state Capitol where immigrants and activists called upon lawmakers to make driver's licenses available to people who are living in the United States illegally. Phoebe Petrovic/WPR

Editor's note: This story has been updated to include original reporting by WPR staff.