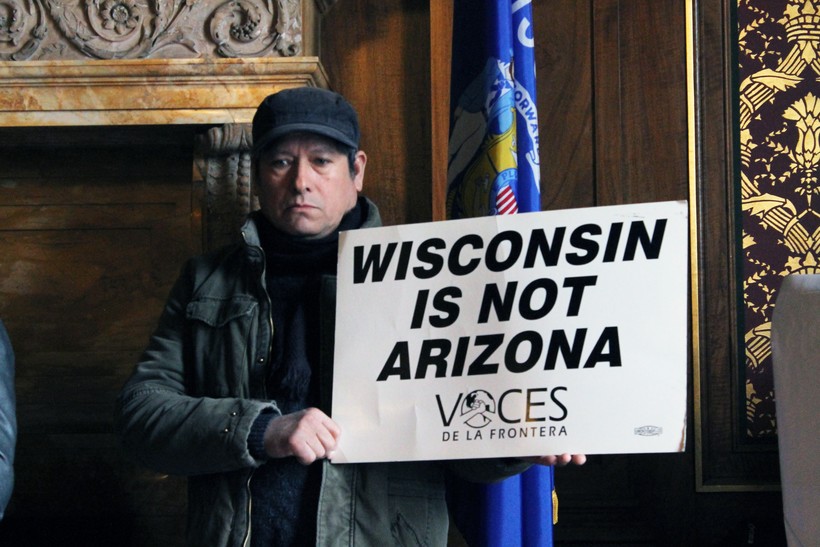 A protester holds a sign reading "Wisconsin Is Not Arizona." Many have compaerd recently introduced legislation to harsh immigration laws proposed in Arizona.

Hundreds of protesters gathered at the state Capitol on Wednesday to voice their opposition against legislation they say is anti-immigrant.

One of the bills that has been drawing criticism would prevent local governments from issuing their own photo ID cards to people who are ineligible for a state driver's license.

"A local ID would be very helpful for many things: going to the library to get a book, opening a bank account," said Guadalupe Romero, a member of the immigrant rights group Voces De la Frontera who attended the protest.

Local governments currently do not issue photo ID cards but Milwaukee County officials proposed the idea late last year and accounted more than $100,000 for it in the 2016 budget.

Romero and other opponents of the bill said it's an attack on local control. Republican Sen. Chris Kapenga disagrees.

The bill passed a Senate executive committee Wednesday afternoon. It may be voted on the next time the full Senate meets.

In addition to the photo ID bill, protesters spoke out against the so-called anti-sanctuary city bill. The Republican backed bill would allow police officers to question people about their immigration status.

"This will serve as a symbolic step backwards," said Madison Police Chief Mike Koval. "It sets the wrong tone; it sets the wrong climate for inclusivity and where everybody has access."

The sanctuary city bill has yet to be heard by an executive committee of the Assembly.