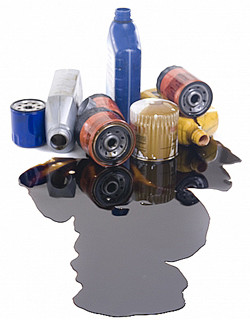 The DNR is investigating a rash of illegal dumpsites in Northwestern Wisconsin. Hundreds of cans containing paint and hazardous solvents were found, and officials expect there is more out there.

Three dumpsites containing large amounts of paints, coatings and solvents were found in Burnett and Polk County. The chemicals, especially the solvents, are considered hazardous and require special disposal.

Tom Krsnich is the administrator for the Department of Natural Resources Environmental Crimes Unit. He says this was a large and coordinated dump. "When I find several hundred in one concentrated area and witnesses tell me that they were dumped at a particular time and day then that is alarming. That raises the bar a little bit and the environmental crimes investigation unit gets involved."

Krsnich says dumping this much paint and solvents can cause a lot of harm. "Dumping it in the woods places those people, that property and in some cases even the groundwater at risk."

A company from the twin cities that specializes in dumpsite cleanups has already removed the chemicals. Krsnich says they even had to remove some topsoil that had been contaminated.

Overall Krsnich says illegal dumpsites in the state have gone down dramatically over his 20 years with the DNR. He says that is because people are more aware of the dangers, and more drop-off sites are available. "Now there's literally hundreds of places statewide that you can take things. Every county in the state has a recycling program. They have days where you can bring in paints and other waste that you don't know what to do with."

The DNR is asking for the public's help in this case. Anyone with information should call the DNR hotline 1-800-TIP-WDNR.