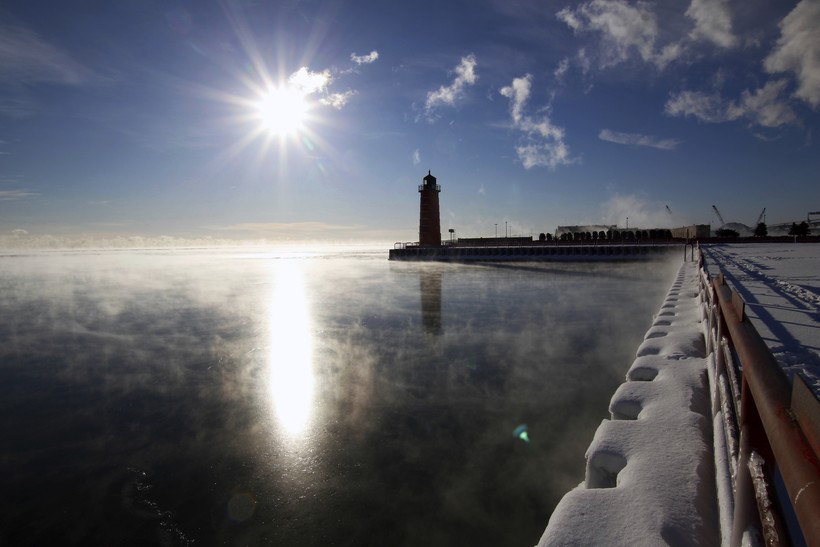 Steam rises from Lake Michigan on Friday morning, Jan. 25, 2019, in Milwaukee. An arctic wave has wrapped parts of the Midwest in numbing cold, sending temperatures plunging and prompting officials to close dozens of schools Friday, but forecasters say the worst may be yet to come.

A blast from the Arctic is headed for the Midwest next week, bringing some of the coldest air Wisconsin has endured in years.

Wind chill values down to minus 40 degrees are expected across much of the state, with the most severe wind chill in western Wisconsin, according to Sarah Marquardt, meteorologist with the National Weather Service.

The frigid temperatures should set in on Tuesday and stay until at least Thursday, although it could linger through next week.

"It won’t be until at least into February before we see any improvement," Marquardt said.

The bitter cold, which will cover the entire Midwest, could be as bad or worse than the 2014 polar vortex outbreak, meteorologist and Cato Institute scholar Ryan Maue told The Associated Press.

It's "a textbook case of an Arctic outbreak," Maue said.

As the cold settles in, classes in Wisconsin's largest school district have been canceled with nearly 78,000 students in Milwaukee Public Schools off Friday, according to AP. High temperatures in the area are expected to reach just 2 degrees with a wind chill of minus 23.

Before the worst of the Arctic air hits Wisconsin next week, the weekend will still be cold, with a chance of snow, says Marquardt. Highs this weekend will stay in the single digits. The weather service is watching the potential for several inches of snow across Wisconsin Sunday night into Monday, with the southern half of the state getting the most accumulation.

"It’s very important to limit time outdoors during this very cold air," said Marquardt. "Make sure your skin is covered."

With wind chill values down to minus 40 degrees, she said, frostbite can occur in as little as 10 minutes.