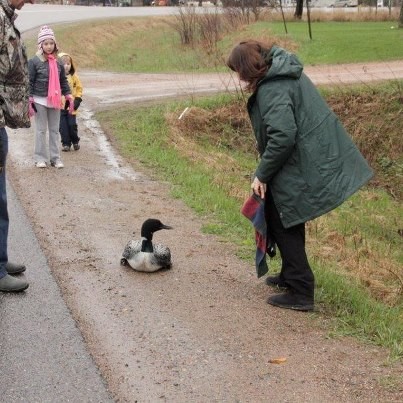 An ice storm late last week caused significant problems for migrating loons, with many of the birds literally falling out of the sky.

"The loons were iced. They were flying at altitude and the birds became wet, and basically were encased in ice, and then fell to the ground like missiles from a high altitude. Many of them were actually injured."

"I knew we were in trouble by Friday morning. We started receiving many, many calls of loons in fields, cow pastures; just about everywhere, people were finding loons."

The problem was so bad that loon rescue experts from the U.S. Geological Survey office in La Crosse came to help. And because the birds fell over a sparsely populated area, only a fraction of them may have been discovered. Loons usually return to the same northern lakes each spring, and Gibson says it may be weeks before we know how many of the birds were killed.

"It's something that we don't know - if these loons are Canadian loons and they're still migrating. The difficult factor is a lot of the lakes up north and even north of Antigo are still frozen. By this time in any normal year they would be open."

Loons are helpless on solid ground, and need at least a quarter mile of lake surface to become airborne.