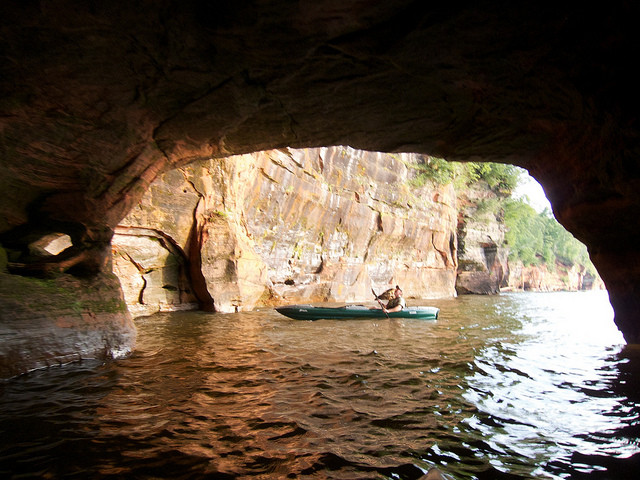 Ice Caves Cause Surge In Summer Business At Apostle Islands

Economic Impact From Tourism Is Expected To Be Considerable
By Mike Simonson
Share:

A report from the National Park Service says 451 jobs were created in Wisconsin by the Apostle Islands National Lakeshore and St. Croix National Scenic River last year — and thanks to the winter’s ice caves in the Apostles, this year is expected to be even better.

The total economic benefit of the two national parks last year was $29.3 million. The Village Inn in Cornucopia gets a small slice of that from tourists who visit the Apostle Islands sea caves. Co-owner Cheryl O’Bryon said they’re booked through Labor Day, with much of the traffic being repeat business from the ice caves last winter.

“I definitely have seen a whole different kind of groups of people, that’s for sure,” said O'Bryon. “I know that Greg, our outfitter in town, is doing gangbusters with kayak trips to the sea caves. There’s just tons of people around.”

The ice caves drew more than 130,000 people in just two months from around the world last winter. Ashland’s South Shore Brewery Manager Sonjia Johnson said that the record-setting winter season may be why the area is also seeing its best summer in a decade.

“I don’t necessarily ask them why they’re up here, but with our sales being up and the weather being questionable, that has had a lot of impact on us from the ice caves,” said Johnson.

Apostle Islands National Lakeshore Resources Chief Julie Van Stappen said a normal number of visitors for a year is about 160,000 people. This year's total, she said, will be well above that.

At St. Croix and the Apostles, 320,000 people visited last year, which had an economic impact in communities within 60 miles of the parks.