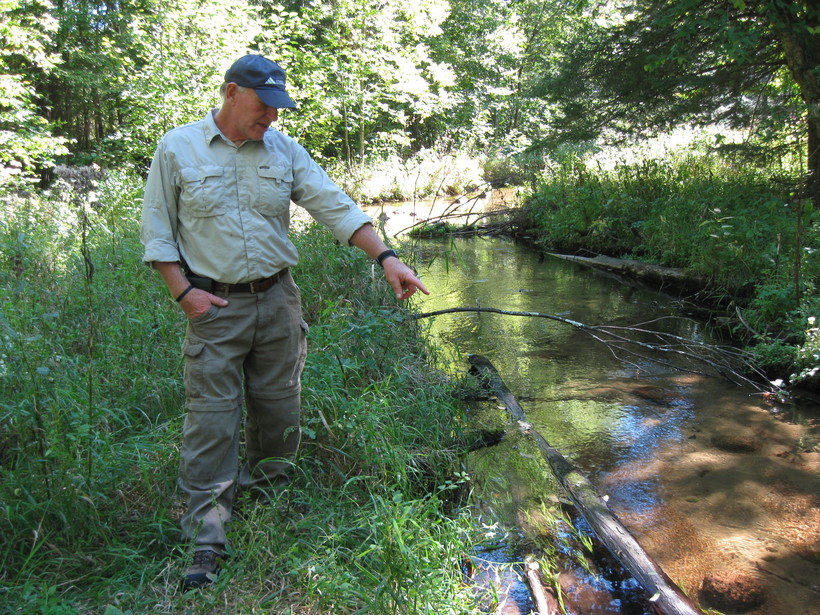 A significant segment of the Ice Age Trail in central Wisconsin is closer to completion after a weeklong work project that drew volunteers from across the Midwest. Work started on a stretch of the Ice Age trail system two summers ago, as underbrush was raked and cleared along the Plover River in eastern Marathon County.

Dick Pernsteiner, who was then the Volunteer Chapter Coordinator for the trail, called that stretch of the river a "hidden jewel." "It's full of rocks with moss covering on them, a lot of trees here. It's always open. It's clear water. It's just as bright and clear as you can imagine here. It's a trout stream."

Last week, dozens of volunteers from several states pushed the trail system further north, and brought it closer to completion.

Tim Malzhan is the Director of Field Operations for the Ice Age Trail Alliance. He says, "Last week we had volunteers from all over the state of Wisconsin and neighboring states join us to construct 1,029ft of elevated boardwalk through a cedar dominated wetland."

Malzhan says the new stretch of trail contains a row of boulders that marks the furthest reach of the Ice Age glaciers. "They were moved by ice and water. As the glacier melted, tremendous volumes of water were released and these boulders were repositioned on the landscape."

There is still more work to be done. Malzhan expects the Plover River segment to open to the public sometime next summer. The 1,200-mile Ice Age Trail is one of only eleven federally designated National Scenic Trails in the U.S.