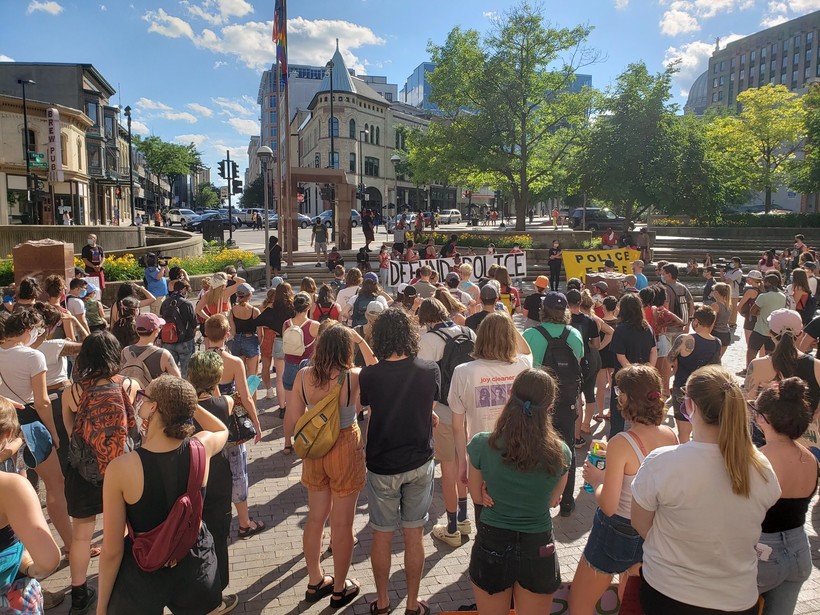 Hundreds gathered near the state Capitol in Madison and marched to push for the removal of police officers from schools on Thursday evening, June 25, 2020. Shawn Johnson/WPR

Hundreds Of Protesters March To Push For Removing Officers From Schools

A couple hundred protesters gathered for a march through downtown Madison on Thursday evening as part of a call to remove police officers from Wisconsin schools.

The march began on the State Street steps in front of the state Capitol next to the pedestal where the Forward statue stood until it was toppled by protesters two days ago. 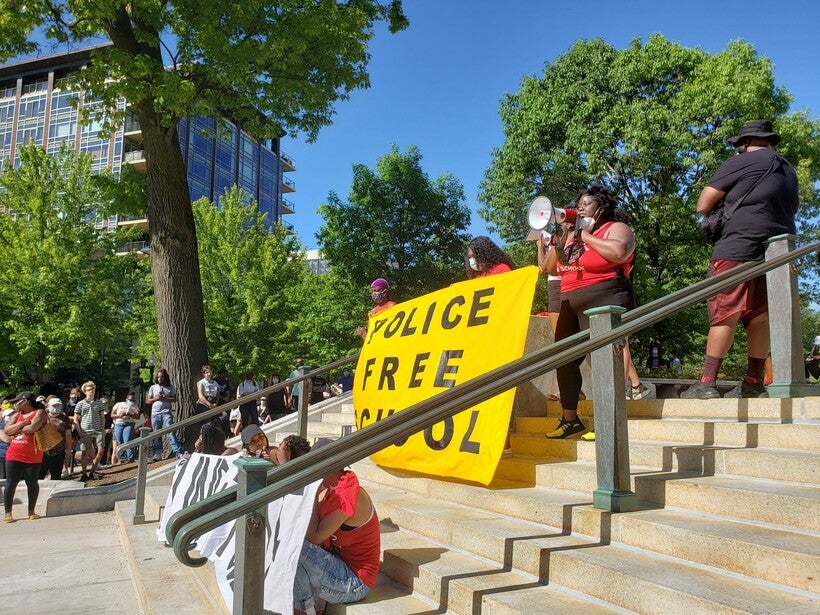 Protesters gathered ahead of the march beginning at the state Capitol on Thursday evening, June 25, 2020. Shawn Johnson/WPR

Protesters chanted, "If we don't get it, shut it down" as they marched around the Capitol Square.

Protesters chant "If we don't get it, shut it down" as they march around the Capitol square in Madison. Looks like a couple hundred people here right now. pic.twitter.com/D8M3plYr5y

The march was organized by Freedom Inc., which has been active in Madison trying to remove police from area schools. The Madison Metropolitan School District could end its contract with Madison police on Monday.

As the march continued, protesters formed a perimeter around the state Department of Public Instruction Building. Area traffic was diverted.

Protesters formed a perimeter around Wisconsin Dept. Of Public Instruction building in downtown Madison. Traffic has been diverted. pic.twitter.com/AJFTWkePxr

As protesters rallied, they attached a "Police Free Schools" banner under the U.S. flag at the building. They then raised a second flag outside the building with a picture of a pig on it.

Protesters have attached a "POLICE FREE SCHOOLS" banner under the U.S. flag at the Wisconsin DPI building. pic.twitter.com/RZXNZCsPb4

The demonstration came on a day when news surfaced that police were investigating a potential hate crime against an 18-year-old Black woman who said she'd been doused with lighter fluid and burned by a group of white men while she was stopped at a traffic light in downtown Madison.

It was also the first organized event since Tuesday's protest where demonstrators toppled two statues and assaulted state Sen. Tim Carpenter when he tried to take a video of them.