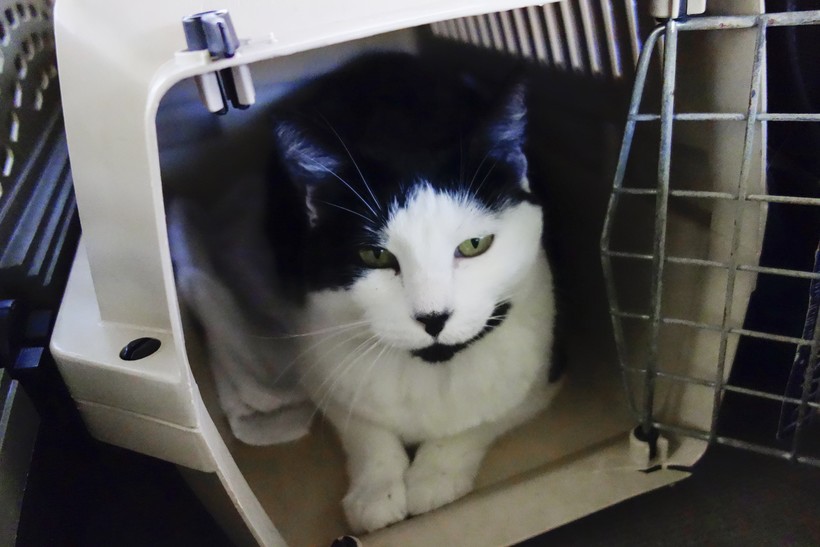 Selecting The Right Carrier And Getting The Cat Acclimated To It Makes A Difference
By Chris Malina
Share:

Ask just about any cat owner and they'll tell you it's no fun trying to bring their feline friend to the vet.

Trying to get a cat into a carrier and into the clinic can easily result in scratches, bites and blood being drawn. It's enough to want to skip the vet altogether, and because of that, cats may not be getting the veterinary care they need.

"Cats now outnumber dogs when it comes to family pets, but we see fewer cats coming into the vet," said Dr. Sandi Sawchuck, clinical instructor at the University of Wisconsin-Madison School of Veterinary Medicine. "It's not that (owners) feel like they don't need vet care, it's the transportation issues."

But getting to and from the vet doesn't have to be so stressful for cats and their owners. Sawchuck said there are plenty of things cat owners can do at home to prepare their pets well in advance of a vet visit.

First off, a proper carrier is a must.

"I see people cramming 18 pound cats into these little, tiny carriers," Sawchuck said. "If you're going to be buying a carrier, get a large one, and make sure that it has easy-release sides so that you can take the top off. A lot of cats enjoy being at the veterinarian if they can be down in the bottom half of their carrier, where they still have some sides to feel like they're protected."

Not having a traditional front loading carrier can also alleviate the problem of a vet having to "shake" a frightened cat out, which only scares them further, Sawchuck said.

She also recommends solid-sided carriers, as opposed to the soft-sided ones made out of mesh or other fabric.

"The real soft sided ones, sometimes the cat feels a little more insecure, just because the bottom is a little weaker when you're picking it up and carrying it," Sawchuck said.

Also, a vet visit shouldn't be the only time cats see or interact with a carrier. Sawchuck recommends leaving the carrier out at all times and making it a permanent fixture in your cat's environment. Adding a blanket to the carrier can make it extra comfortable and inviting, and treats inside the carrier can be used to train the cat to go inside of it.

If your cat still isn't handling the carrier well, Sawchuck said it's OK to drape a towel or blanket over the front of the carrier when in use, so the cat can't see out.  This can also be helpful when sitting in the waiting room of the vet's office where other animals may be present. She also recommended the use of Feliway, a pheromone that can be used to calm stressed out cats. Catnip can sometimes also do the trick.

In addition, consider learning how to "burrito" your cat, a practice that can also come in handy when trying to trim nails.

But getting the cat into carrier is often only half the battle. There's also the dreaded car ride to the vet.

"Go around the block, or make short trips with them," she said.

She also recommends making what she calls a "friendly pet visit" to your vet clinic, where you swing by with your cat, say "hello," get a treat and then head home.

Finally, if you have multiple cats, Sawchuck recommends making separate appointments, as opposed to transporting and having those cats treated at the same time.

"Sometimes we will have cats that get stressed, and they feed off of each other," she said. That can make it more difficult to treat both cats.

That said, it's absolutely necessary that multiple cats come, Sawchuck said each cat should have its own carrier. But she strongly recommends the "one cat per appointment" rule.