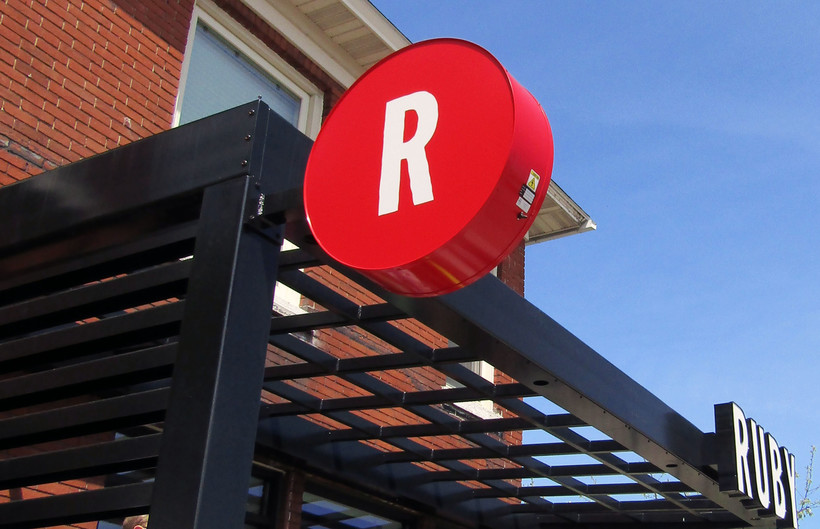 The Stevens Point location is the first café for Ruby Coffee Roasters, an established roaster that has done most of its business online. Rob Mentzer/WPR

With New Cafe, The Central Wisconsin Roaster Is Expanding
By Rob Mentzer
Share:

The new samples were in. The beans were from five lots on a Guatemalan farm, and the coffee was excellent.

Jared Linzmeier had visited the grower multiple times in the past, but this shipment in early May, was his first taste of this year's harvest. When he tasted these samples, they conjured for him the details of that farm, that region of Guatemala, the year’s harvest and all that went into it.

Jared said his company, Ruby Coffee Roasters, will likely buy at least three of the five lots he tasted, each in quantities of between 1,000 and 1,500 pounds. Those batches will represent the entirety of this farm’s output of that coffee. When Ruby Coffee Roasters sells it, it will be a world exclusive.

Jared, a central Wisconsin native, learned the craft of roasting coffee from some of the nation’s best roasters. A little less than six years ago, he moved his family from the West Coast back to the house he grew up in outside of Stevens Point and started Ruby, a coffee roasting business he named after his grandmother.

Jared is 34. He is exactly the sort of young entrepreneur Wisconsin municipalities are striving to cultivate.

His roasting operations grew to employ 10 people, earning wholesale customers and online purchases from around the nation, and significant recognition. In addition to Guatemalan beans, they have sourced coffees from growers in Ethiopia, El Salvador and Costa Rica, most of them farms Jared has known personally.

GQ Magazine featured Ruby in a list of "The Best Bags of Coffee You Can Buy Online." In February, Food & Wine Magazine named the company the best coffee in Wisconsin. Some weeks, they roast as much as 4,000 pounds of coffee at the roasting facility in Nelsonville, about 20 minutes east of Stevens Point.

Now Ruby is moving from a company that does almost all of its business online to one with a genuine brick-and-mortar cafe. The new Ruby Coffee Roasters cafe opened earlier this month in a downtown Stevens Point location that Jared hopes will serve locals plus curious road-trippers. All at once, the company has more than doubled its workforce, adding 14 people to work at the cafe, including a full-time manager and a chef. 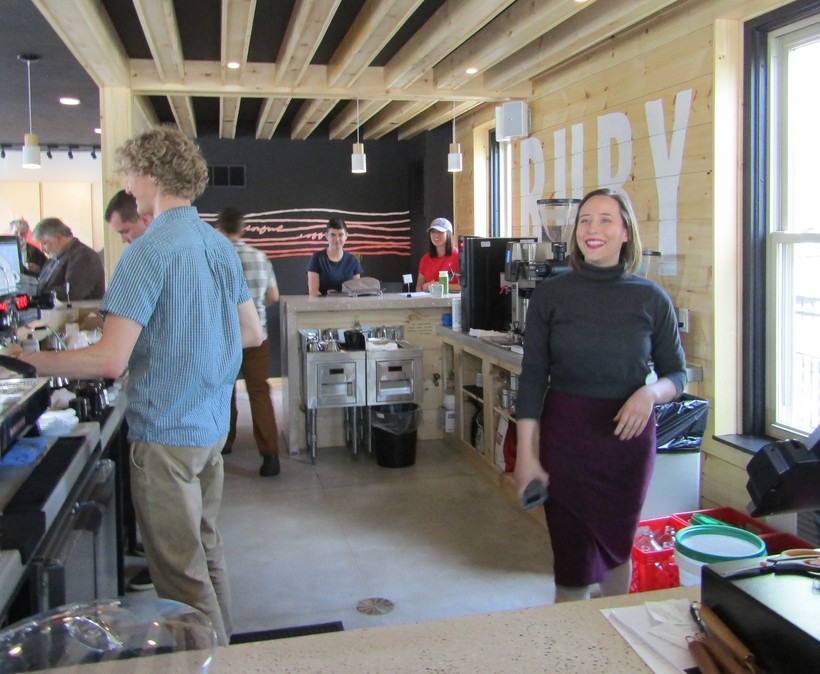 Jared was born in Stevens Point. After he graduated from the University of Wisconsin-Madison in the early 2000s, he moved to Los Angeles, where he started working at Intelligentsia Coffee, a Chicago-based company that had just opened its first West Coast location.

"I was Intelligentsia’s first full-time dishwasher" at the L.A. cafe, he said.

That’s also where he met his future wife, Deanna, who grew up in Los Angeles. She was a regular customer at the shop where he was working.

"I lived a block away from the cafe," she said. "His story that he loves to tell is that he took pity on me for spending all of my money on coffee, so he started giving me free coffee."

At work, Jared graduated to busing tables, then doing other support work for the baristas. When Intelligentsia started a roastery, he became an apprentice roaster. He began to learn the fine points of coffee roasting — the business of coffee and the relationships involved, including with growers, but also the craft of the roast and the art of making a great cup.

Jared and Deanna married. They had their first daughter, Addie. They moved to Portland as Jared’s career advanced, then Seattle as he took a new roasting job with a company called Caffe Ladro.

As their baby daughter grew, they started to feel like Seattle wasn’t where they wanted to be.

"We lived right by the Space Needle, right by downtown," Deanna said. "There’s nowhere you can take a 1-year-old to toddle around and learn (how to walk). You have to hold her hand all the time or she’s going to get hit by a truck."

On visits to see Jared’s family in Stevens Point, the couple made friends with Sarah Jo More, who owns Main Grain Bakery, and started to feel connected to the city’s food scene. And Wisconsin started to feel like a place they could make their home.

Deanna was pregnant with their second daughter, Elsie, when they moved in late 2013.

Outside of Madison, Wisconsin cities and towns are starving for young adults.

In a 2017 study, the UW-Madison’s Applied Population Lab found the young adult population — defined as those between age 20 and 39 — was growing in only 15 percent of the state’s communities. Most places are losing young adults, and some are losing them rapidly. The problem is most pronounced in rural and Northwoods communities.

More, 30, started Main Grain Bakery just after she graduated from UW-Stevens Point. She remembers when the Linzmeiers first came into her store, asking about the area.

"I just jumped on it, like: Here are all the things you need to know," More said. "They were wondering what their next step was, and I helped them, maybe, figure that out."

For Jared and Deanna, small-town Wisconsin meant access to family and a place in Stevens Point’s burgeoning food scene.

The city of about 26,000 people was also a place where they could start a business at very low costs — no venture capital funding needed. They lived outside of town in the house Jared grew up in. Jared roasted, managed the company’s website and reached out to potential wholesale customers from there. Deanna had some income from her own business as a consultant to nonprofits, and it was enough to keep the family afloat as Ruby got off the ground. 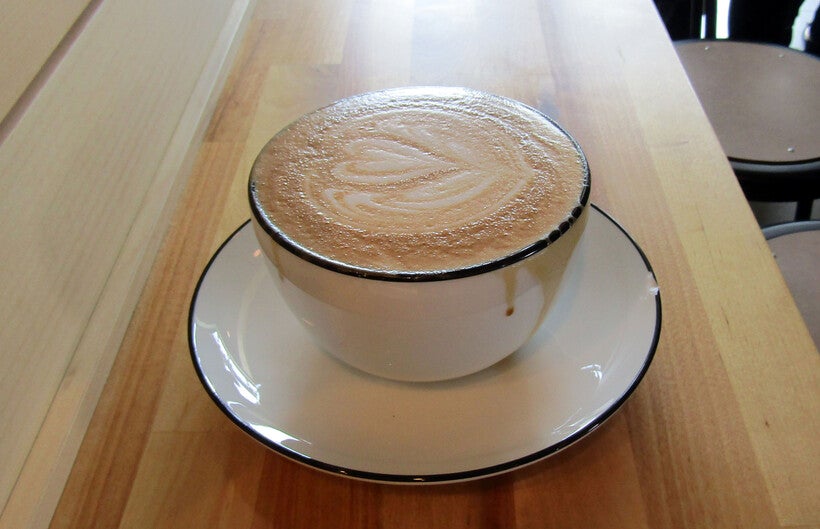 A customer’s latte waits on the counter of the Ruby Coffee Roasters’ café. One of the shop’s specialties is a maple latte, which uses maple syrup as sweetener. Rob Mentzer/WPR

In addition to the people that they employ directly, Ruby Coffee Roasters may be contributing to central Wisconsin’s economy in another way. The Applied Population Lab’s report said this about what young adults want:

"It is interesting how many people noted the importance of sit-down coffee shops," the report’s authors wrote of their interviews with young adults. "And it is worth mentioning that they didn't bring up the topic of coffee shops for the purpose of setting up their laptops and teleworking. They mostly mentioned them as gathering spots."

'We're All Trying To Celebrate The Things We Love About Wisconsin'

On the day of the ribbon-cutting at the new Stevens Point cafe, people crowd the shop and Jared and Deanna attend to various associates, employees and friends. The mayor of Stevens Point presents them with a check for $30,000, part of the city’s facade improvement grant program. They’ve invested a lot more than that in renovations of the space, the former home of the Water Street Grille at 1410 Third Street.

Ruby Szitta, 90 — the cafe's namesake — made it down from her home in Gleason, about an hour’s drive north, for her family's big day. When the time comes, she’s the one who cuts the ribbon.

"I just feel wonderful," Szitta said. "I’m so proud of Jared and Dee." 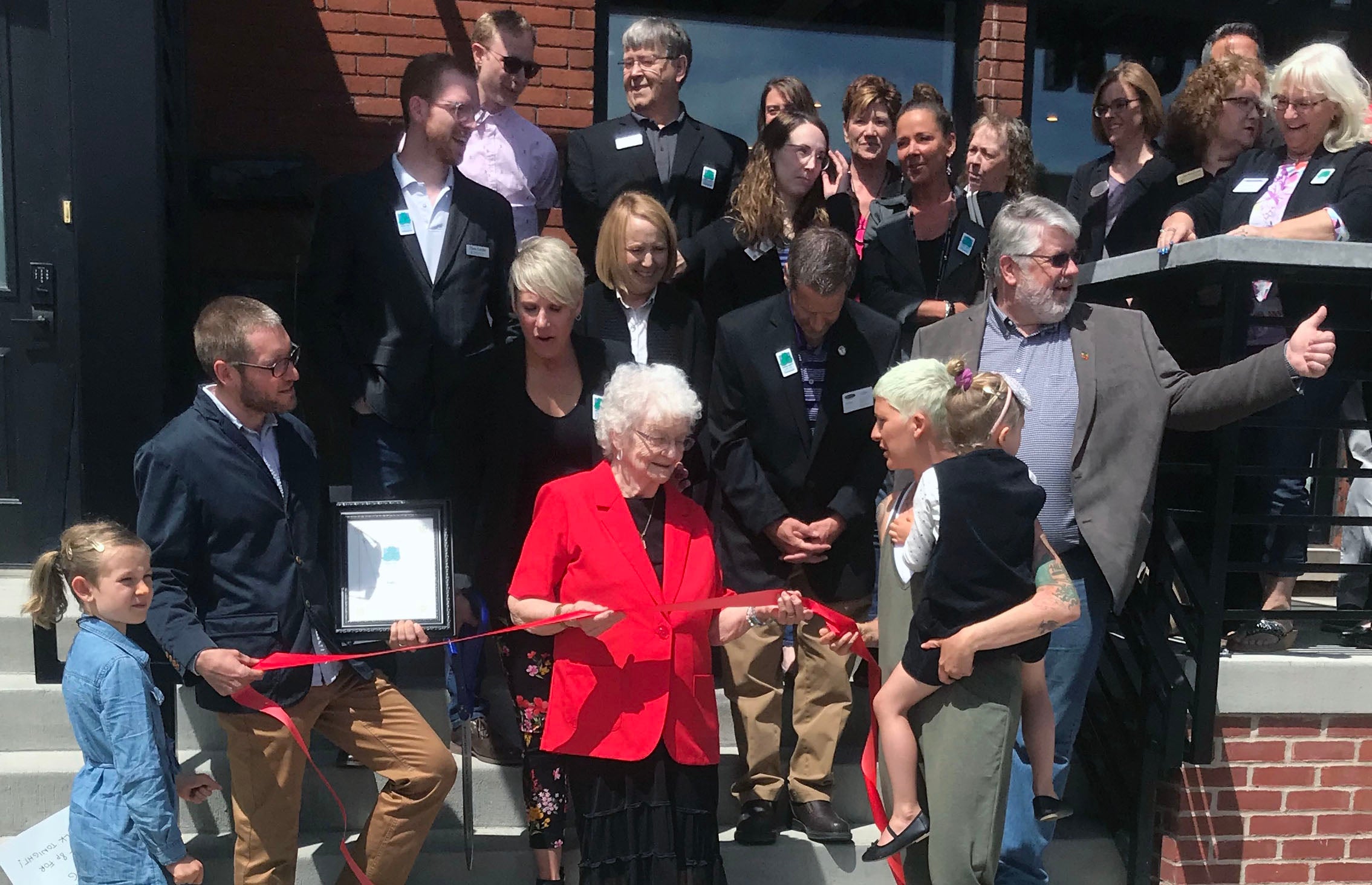 Ruby Szitta, center, prepares to cut the ribbon at the grand opening of Ruby Coffee Roasters’ Stevens Point café, as owners Jared and Deanna Linzmeier and their daughters look on. Rob Mentzer/WPR

Cafe manager Katie Dehmlow is from Hudson, but had been working in coffee shops in the Washington, D.C. area. She moved back to Wisconsin in February for this job. She loves coffee.

"It’s the most flavorful drink you can possibly drink, and it's really interesting to find new and different ways to pull different things out of it," she said.

Dehmlow sees the cafe, which will also serve locally sourced food, as a celebration of the region.

"We’re all locals, and we’re all trying to celebrate the things we love about Wisconsin," she said. "The agriculture, the community, the quality. The relationships we have with other people."

As the crowd gathers, Jared and Deanna hold a daughter each as Jared speaks to the crowd. Ruby Coffee Roasters, he says, was just a dream in 2013.

"We were thinking, 'Let's move back to Wisconsin, let's take control of this trajectory that our life is on and start this business roasting coffee,'" he says.

Jared sees Stevens Point undergoing a transformation, and he’s excited to be part of it. High-end coffee and locally sourced food can be part of it. And excellent coffee, he said in an interview, is definitely not the province only of the coasts or urban centers.