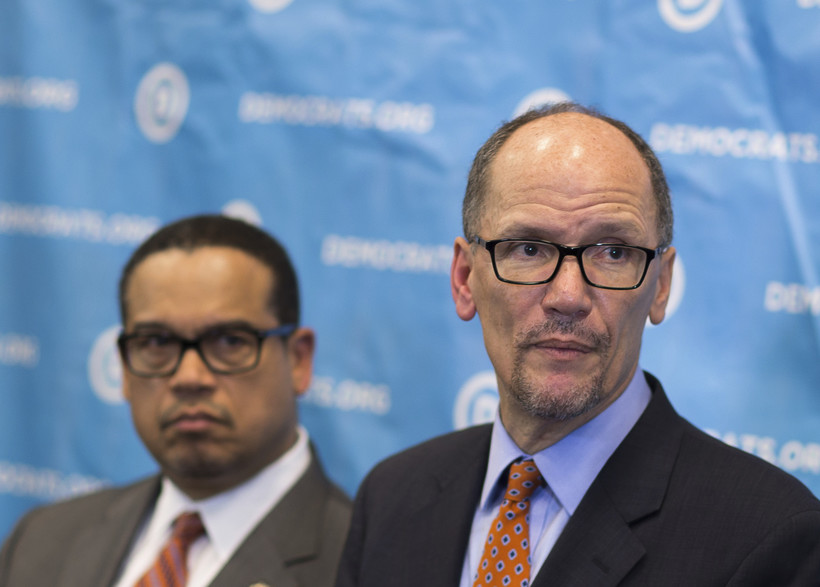 How Should Liberal Wing Of Democratic Party Feel About Its New Party Chair?

Political Science Professor: Both Candidates Are Left-Of-Center Democrats Despite How Race Was Framed
By Scottie Lee Meyers
Share:

The future of the Democratic National Committee was in the balance over the weekend as party leaders voted for a new chair in a race between two candidates who came to symbolize the fight between the Obama establishment and a surging progressive wing led by Sens. Bernie Sanders and Elizabeth Warren.

Former U.S. Labor Secretary Tom Perez ended up edging out U.S. Rep. Keith Ellison of Minnesota in a competitive race Saturday in Atlanta. In the weeks heading into the election, the race was framed as a symbol for the future of a party that is in clear need of some soul searching following the 2016 presidential race.

Throughout the Democratic primary process, Perez, who becomes the first Latino to head the party, campaigned for Hillary Clinton, and Ellison supported Sanders. Ellison takes the second in command post for the party, but it's undeniable his loss reopens wounds for liberals who feel Democrats need to shed their loyalty to the status quo in order to take back Congress.

Jennifer Piscopo, a political science professor at Occidental College in Los Angeles, said the election of Perez shows Democrats are not ready to abandoned its Obama brand, despite the fact Clinton essentially lost running for his third term.

"I think that the DNC selection shows that the Democratic National Committee is still very much committed to the Obama legacy," Piscopo said.

Perez may be a mainstream Democrat, but Piscopo pushed back against the premise that he's a moderate centrist.

"His policy positions, his priorities looks very similar to most Democratic members of Congress," Piscopo said. "So I really see Perez as kind of a continuity candidate for the DNC and providing a bridge from the Obama era into whatever era the DNC is headed into next."

While Perez isn't as liberal as Ellison, he's still pretty progressive, according to FiveThirtyEight's political ranking system. Piscopo said that should keep the Sanders wing of the party satisfied.

In conceding the race, Ellison encouraged his supporters to "give everything you've got to support Chairman Perez."