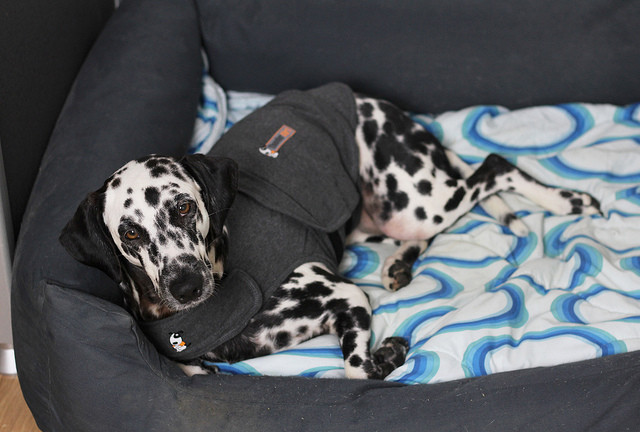 How To Help Your Pup Get Through Thunderstorms

It’s that time of the year when thunderstorms and severe weather are becoming more and more common, and that could mean some stressful evenings for your dogs this summer.

Whether it’s the sound of booming thunder or the bright flash of lighting, storms can give dogs a great deal of anxiety. Luckily, there are options available for dog owners looking for some relief.

First off, there are clothing products that claim anxiety relief, such as the Thundershirt and Anxiety Wrap, which have become more common in recent years. According to Dr. Sandi Sawchuk, a clinical instructor at the University of Wisconsin-Madison School of Veterinary Medicine, it’s an option that can work for some dogs, but not others.

But before putting a clothing item on a dog during a storm, Sawchuk said it’s important to try it out during a stress-free time to see how the dog reacts.

"Many dogs hate wearing clothes, and it actually freaks them out more to have clothes on," she said. "Rather than decreasing anxiety, it can increase anxiety. So, if you see your dog getting more anxious when you try this, then obviously don’t go out and buy a Thundershirt."

If you don’t want to commit to a purchase of a Thundershirt or Anxiety Wrap, Sawchuk said you can also wrap your dog in an elastic bandage to see how they react. But again, do it in a stress-free situation on a day where there isn't a cloud in the sky.

But with many of these medications, Sawchuk warned you have to administer them before a storm starts and your dog gets anxious. "You need to be a weather-watcher," she said.

As always, she recommended consulting with a veterinarian before starting any medication.

Certain dogs, such as bulldogs, may be especially good candidates for medication because of the way they are built. Sawchuk said that during stressful events, bulldogs tend to run into breathing issues that could lead to more serious problems.

"The more they pant, the more distressed they get, the more stress they put on that airway," Sawchuk said. "We will see these dogs actually during thunderstorms and during stressful events ending up in critical care, having to be on oxygen and sedation drugs, just because their airways don’t accommodate all that extra panting."

Additionally, making environmental changes and teaching your dog coping behaviors can be solutions, as well.

Getting them used to a "safe zone," such as a closet or crate, during a nonstressful time can help them during a stressful time. And it helps if you can do this with your dog early in its life.

"If you wait until they’ve already got their behaviors set, it’s going to be a problem for them," Sawchuk said. "Not impossible, but it can be more difficult to get under control."

While dogs may not grow out of thunderstorm-phobia, they may be able to better cope with the stress in the future with a little help.

"If we can go through an entire season without having an anxiety episode … the next year may be a whole lot better," Sawchuk said.