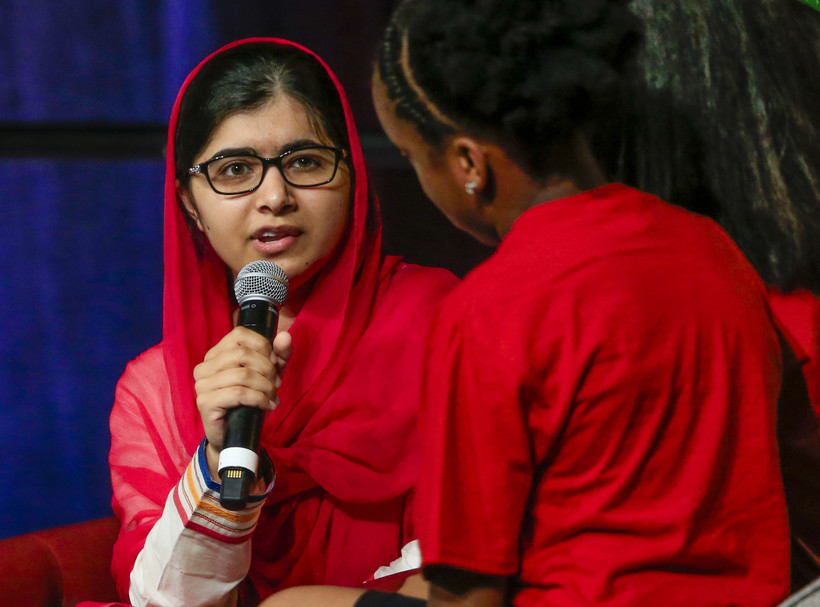 Malala Yousafzai, a Pakistani activist for female education and the youngest-ever Nobel Prize laureate, chats with panelists on stage at a benefit lunch for Girls Inc., a nonprofit organization whose mission is giving confidence to girls, in Omaha, Nebraska, in July 2016. Nati Harnik/AP Photo

How To Help Girls Be Successful Activists

Every so often a story crops up in the news about a girl, ranging in age from very young to teen, who takes on a company or a lawmaker to create change.

An example of one of these young activists is 14-year-old Julia Bluhm, who petitioned Seventeen magazine to stop photoshopping images, and the publication complied. But while the move was seen as a victory for women and provided a powerful media narrative, Colby College Professor Lyn Mikel Brown said this doesn't tell the full story of how young women engage in activism. Nor does it show how girls build coalitions with other like-minded young women and adult allies to create the desired change.

Brown is an expert in the psychology of girls and how they participate in activism. She's also the founder of three grassroots organizations aiding girls in their pursuit of social causes. Most recently, she published the book "Powered by Girl: A Field Guide for Supporting Youth Activists." She said there are many ways adults can help girls with their activism.

Adults should be the scaffolding, not the building

Brown argued adult allies need to value the viewpoints of their younger allies and trust these girls are speaking from a place of truth.

"(Older women) need to appreciate the fact that girls are experts on their own experiences," Brown said. "Their experiences now are very different than ours growing up."

She said in order for adults to do right by these young activists they need to do the job of listening with respect to what viewpoints these girls are bringing to the table.

"We have to be humble, and we have to allow them to sort of take the lead," Brown said.

She likened the role of the adults to that of scaffolding when a building is under construction. By being available with support and guidance, adults can make it easier for these girls – as individuals or as groups – to take charge and to feel empowered. And like scaffolding, it eventually goes away when the girl is ready to independently pursue advocacy.

It's OK for girls to be angry

Brown warned that when we talk about girls who take on activism, we need to be aware these stories can be commodified in the media. This can make the girls seem friendly and approachable, instead of angry and frustrated at what they're trying to change. She pointed to the evolution of the "girl power" phenomenon of the underground feminist punk movement riot grrrl to the cheery, consumable 'zig-a-zig-ah' of the Spice Girls in the 1990s.

For adult allies, Brown said, it's important to recognize frustration and desire for change are motivating girls. Furthermore, allowing girls to be angry, instead of telling them to be nice and accommodating, can allow them to shine with their activism.

"Right now there's a real liveliness about, and a real openness about, girls' voices and strong feelings," she said. "And it just feels like it's a moment of incredible potential."

Brown also said activism isn't very effective alone because the social change a girl may want to influence may not go very far when working toward her goal solo.

"It's important for girls to be part of coalitions who really can support their strong feelings about an issue," Brown said. "A coalition is a group of people working across differences who have a really similar goal in mind."

And finding like-minded people can make a huge difference.

"For girls to be a part of (coalitions), it makes them feel like their strong feelings, their risk taking, their anger is supported, they have company," she said. "And that's really important. I think that it's more important than being able to please people outside of the group. Or to have the broader culture be supportive."

Brown said her three organizations help pair girls with similarly minded girls but also gets adults involved in order for the girls to know they have loyal support. She said many of the girls come from diverse backgrounds and help their cohort understand the issues at hand from the various perspectives they bring to the table. And she said the role of the adults, in particular, is to stand by these girls when the going gets tough, instead of shrinking away from controversy the way some adults have in the girls' lives.

Adults also need to be ready to be challenged by the girls who are approaching issues from a different viewpoint than their older advocates, Brown said.

"They challenge us on our definition of feminism," Brown said with a laugh. "I've been pushed over the years to really understand intersectionality, gender nonconformity, and trans issues. I've learned a ton by just being with girls, working with girls, engaging with them and arguing with them."

"When they push us at the very heart of the matter, that's when we really have to stay present," she said.

But, Brown said there's still a lot of work to be done when providing the space for these young women to pursue social change. She said one of the biggest challenges facing girls and women is objectification and over-sexualization, which she argued can be a distraction for girls as they try to pursue social change in a culture which sometimes doesn't take them seriously.

She said her hope moving forward is that more adults, teachers, and schools will get involved.