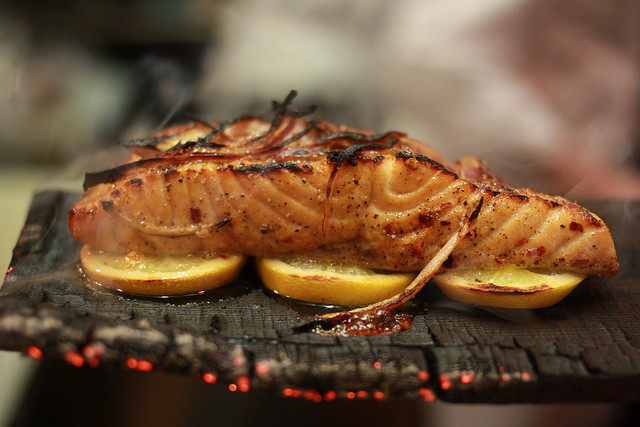 How To Get Started Grilling With Cedar Planks, Courtesy Of 2 'Grillologists'

Using cedar planks can be a fun way to get creative with grilling in the summer. Mad Dog of "Mad Dog & Merrill Midwest Grill'n" said Thursday that he and his co-host Merrill have themselves been experimenting a lot with cedar plank grilling, and have some advice for newcomers.

The first thing Mad Dog recommends is going to a Home Depot, not a grill store, to get the planks. He said to ask for cedar fencing material used to make large cedar fences, and to make sure that the fencing is on untreated lumber. Buying the planks that way saves money, according to Mad Dog. Each piece is about 6 to 7 feet long, he said, and costs as little as two or three dollars.

He added that because the wood is so inexpensive, there's no need to feel bad about throwing it away after each use.

"It’s a one-time use. That’s why you try to be as economical as possible," he said.

According The Grilling Spot Blog, the appropriate plank size depends on the size of the food. That presents another upside to buying full cedar planks: The planks can be cut to the size needed for the foods being grilled.

When it comes time for grilling, Mad Dog said that the cedar plank needs to be soaked for about eight hours. Water, wine and even bourbon are a few liquids that can be used to submerge the cedar plank in, according to Merrill.

Then, it's a question of getting food on the plank, and getting the plank on the grill. The length of time the food stays on depends on what type of cuisine is being cooked, Mad Dog said.

He and Merrill suggested a few specialty food items that they have tried on cedar plank grills, including salmon, shrimp with bacon, sauerkraut with kielbasa, and even string cheese.

"You just take regular string cheese and put that on a wet cedar plank. Let that go for about 20 minutes," Merrill said.

Mad Dog also said that the two have been experimenting with things like cedar plank steak. For those interested in trying their hand at that recipe, Mad Dog suggested going to the farmers market to get lean, grass-fed beef. He likes to add a lot of flavor to the steak using a chai tea rub, with equal parts chai to equal parts brown sugar. A variation of his cedar plank steak recipe can be found here.