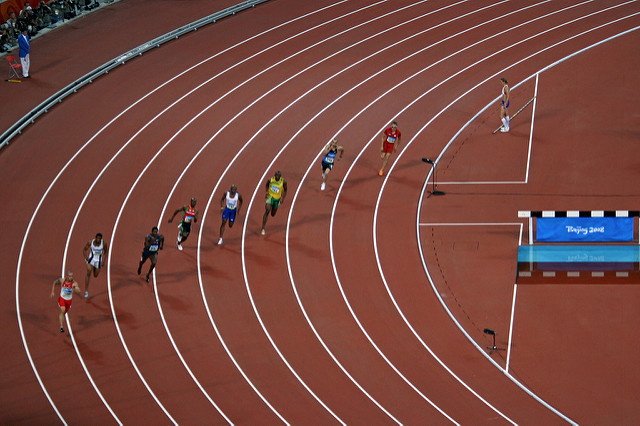 How Do Humans Continue To Break Athletic Records?

Athletes, Researchers Try To Find Out If There’s A Threshold For Human Performance
By Nina Kravinsky
Share:

Human evolution is a lengthy process. While humans haven’t evolved significantly since they started participating in organized sports, athletes continue to shatter records. From Jesse Owens to Michael Phelps, athletes seize international attention when they break those records.

But is there a limit? What’s the threshold of human physical achievement?

Dr. Michael Joyner, a physician and anesthesiologist at the Mayo Clinic, has studied the limits of human performance since he began medical school. Even then, he predicted runners would eventually break a two hour marathon time — a record that for decades seemed impossible. Now though, athletes continue to inch closer and closer to that time, and each new record inspires someone else to break it.

"Most people have no idea what their limits are," Joyner said.

Outside of better training and equipment, former Canadian national runner and sports author Alex Hutchinson said humans have continued to push themselves in the mental aspects of sport — not just in marathons, but on the track, in the pool and on the ice.

Hutchinson said athletes who break records have a trifecta of traits: they have exceptional innate ability as well as training, but they also have exceptional mental tolerance for pain. He said even though most people feel more or less the same pain sensations, some people are able to push through those sensations.

"Limits that feel concrete are actually a little more negotiable than you’d expect," Hutchinson said. "Guys like (marathon runners) (Frank) Shorter and (Bill) Rodgers couldn’t get where they were without extreme genetic potential and extreme hard work. But you also have to learn how to suffer."

Hutchinson compared the physical limits of humans to race dogs and horses. Racehorse Secretariat still holds a world record set in the 1970s. Humans, on the other hand, have continued to inch their physical performance forward.

Hutchinson said that has a lot to do with humans’ ability to race against not just the other athletes next to them, like horses do, but think of the athletes that have raced before them. While they’re running, people are striving not just to be the fastest on the track, but the fastest ever.

That mindset goes a long way in getting people to break records in the sports world.

That’s why some athletes use self-help books meant for business people, and go to leadership conferences designed to help people succeed in corporate, Hutchinson said. Joyner added that especially at the elite level, training becomes about staying relaxed while suffering physically.

"Not just in sports but in so many contexts, being able to control your level of arousal is very valuable skill and not necessarily one that comes naturally to us," Hutchinson said.

Another reason humans continue to shatter athletic records year after year is the expanding pool of competitors, Hutchinson said. More and more people are able to go to the Olympics each year from countries that previously weren’t able to put together strong teams. He said there’s especially been an insurgence of East African runners, for example, who are making the pool even more competitive.

The more people who are able to train and compete, the more likely one of them will have the physical and mental ability to break the latest record.

"You never know where there are pockets of talent who don’t have the opportunity to compete," Hutchinson said.

103-Year-Old COVID Survivor Has Advice For The Unvaccinated
Shamanism Endures In Both Koreas — But In The North, Shamans Risk Arrest Or Worse
There's Big Money In Stolen Catalytic Converters
Will My Sense Of Smell Ever Return? Olfactory Insights From COVID And Beyond
What Is Activism? Carl Hancock Rux Talks With Lara Downes