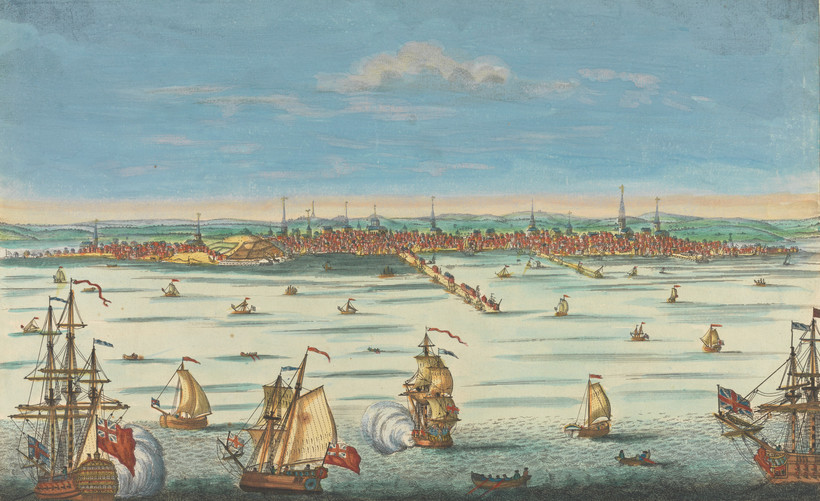 A period print showing a view of Boston in the early 18th century.

New Book Explores How A Pair Of Unpopular Physicians Helped Defeat The Disease Through Innoculation
By Scottie Lee Meyers
Share:

​A half century before the American Revolution properly got underway, Boston faced a smallpox epidemic that, not unlike the British crown itself, threatened the colony’s very existence.

It would also forever change modern medicine, thanks to a pair of daring and unpopular doctors.

In the new book, "The Fever of 1721: The Epidemic That Revolutionized Medicine and American Politics," Madison-based writer Stephen Coss says 1721 proved to be a turning point in the eradication of history’s deadliest disease. At that point in history, 1 in 10 deaths were due to smallpox, as were a quarter of all cases of blindness.

It was also the golden age of piracy, which actually played a role in the epidemic's beginnings, according to Coss.

"That was the terrorism of the day. There were literally hundreds of pirates roaming the coastline of North America and into the Caribbean. And they were a constant threat to the merchant ships that did business along that route," he said.

Passengers on the British vessel Seahorse contracted smallpox while protecting their fleet from pirates in Barbados. When they arrived back in Boston, the third-largest port under the British empire, the disease spread quickly — in part because many people worked to keep the disease under wraps, fearing it could lead to an embargo on the colony’s economic engine. With the coming of warmer weather, the outbreak spread so quickly that officials abandoned plans to quarantine those who were infected.

Enter Cotton Maher, a Puritan preacher whose reputation was still suffering from his role in the Salem witch trials. When the outbreak occurred, he began to desperately seek both redemption and a cure.

Maher had studied medicine at Harvard, becoming the school’s youngest graduate at the time. He believed inoculating Bostonians with smallpox was the way to help eliminate its threat. He discovered that many cultures around the world had already inoculated for smallpox, in some cases for generations.

Maher wrote a series of letters to doctors throughout the city, asking them to run a trial. But doctors saw it as counterintuitive, while the public didn’t much like the idea of injecting the disease into a perfectly healthy human.

The public didn’t warm up to the idea, thanks in large part to the publisher James Franklin and his younger brother Benjamin, who ginned up anti-inoculation sentiment in their newly launched weekly newspaper.

But Maher finally convinced the physician Zabdiel Boylston to begin an inoculation trial. Coss said Boylston, who is now the namesake of one of the city’s grand streets, was receptive to the idea probably because he grew up learning about natural medicine practiced by Native American tribes.

The trials began in June of 1771 when Boylston inoculated his 6-year-old son and two slaves. Less than a year later, doctors who were initially skeptical of the plan were forced to recognize that the trials had a significant impact. Similar trial results in London only corroborated the findings.