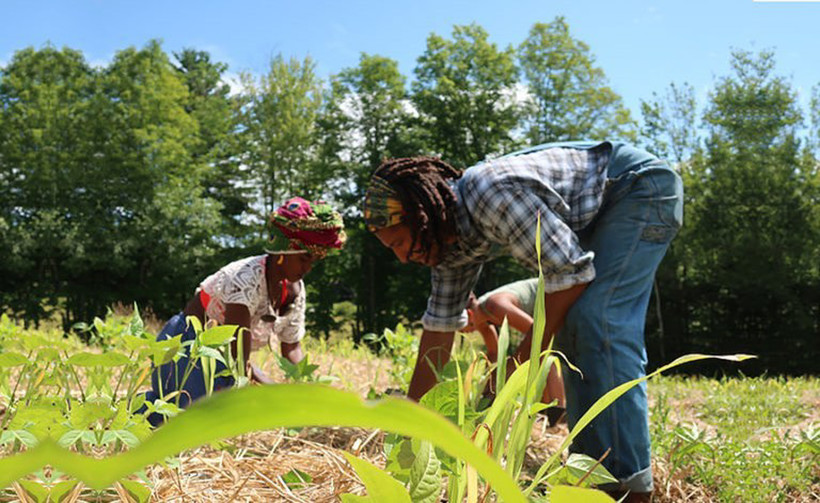 Farmers work the fields on Soul Fire Farm as part of their workshop series. These workshops are designed to teach Black, Indigenous, and people of color specific farming and homesteading practice that they can apply on their own farmland. The in-person workshops have been suspended due to COVID-19, but the farm has been hosting virtual skillshares instead.

Farmer Leah Penniman On How She And Fellow Black Farmers Are Becoming The 'Returning Generation'
By Steve Paulson
Share:

When Leah Penniman was 21, she lived in Ghana for six months. One night she had a dream that changed her life, in which she planted maize on a mountain and heard words she didn’t understand.

So she went to the local priest, who said these words were from the old language of the Krobo, the ethnic group in eastern Ghana. He urged her to be initiated as a "queen mother," a spiritual leader in their community, so she could take their teachings about "tending the soil" as a sacred practice back to the United States. That’s exactly what she did.

Penniman has emerged as a national leader in food sovereignty and environmental justice issues. She’s the author of "Farming While Black: Soul Fire Farm’s Practical Guide to Liberation on the Land," which she discussed with me for "To The Best Of Our Knowledge."

Steve Paulson: Why did you start Soul Fire Farm?

Leah Penniman: I fell in love with farming as a teenager, so there was never a question that I would one day have my own farm. But the real causal event was when my partner John and I were living in the south end of Albany, New York, back in 2005. We had a newborn and a 2-year old, and we were super motivated to feed our children healthy, fresh vegetables and fruits. But there were no grocery stores, farmers markets or public transportation, and there was a moment when I realized that we, as a community, actually need to feed ourselves. We can't just rely on "the system" to feed us.

So in 2006, we signed white man's papers and bought the land and started to farm. It has grown beyond anything I could have ever imagined. It’s not just a farm that provides doorstep delivery of food, but a real ground zero for training the next generation of Black and brown farmers.

SP: Was the south end of Albany what people call a "food desert"?

LP: Yes, the government would call a neighborhood without grocery stores a food desert. But my mentor, Karen Washington, taught me to use the term "food apartheid" instead because a desert is a natural phenomenon. An apartheid is a human-created system of segregation that relegates certain people to abundance of resources and others to scarcity. And that's really what we have today because of a legacy of racism, redlining and unfair zoning.

SP: There used to be a lot of Black farmers in America, but there aren't anymore.

LP: Yeah. Despite the broken promise of "40 acres and a mule," Black farmers managed to purchase almost 16 million acres of land by 1910 and run their own farms. But this was such a threat to the sharecropping way of life in the South that they were met with swift retribution.

The White Caps, the Ku Klux Klan and the White Citizens Council started a domestic terrorism campaign against Black farmers and killed 4,500 people, burned their houses, with lynchings and cross burnings and shooting at people.

SP: Because they didn't want Black farmers to own land, to grow their own food?

LP: Exactly. If Black farmers own their own land, not only are they opting out of sharecropping — which means there's no labor for the white plantations — but they're also disrupting the white supremacy status quo. They're getting too uppity.

The government was completely in collusion with this. In 1965, the Committee on Civil Rights found that the U.S. Department of Agriculture was the number one driver of Black land loss because it would punish Black folks — (those) who were attempting to register to vote, to join the NAACP, to have their own businesses — by denying them loans, denying them crop insurance and crop allotments and all of these other benefits that white farmers were getting.

So you see a decline in Black farmers from having 14 percent of the nation's farms (in 1920) to just over 1 percent today.

SP: There still were some Black farmers during the Civil Rights Movement. In fact, didn’t they play a crucial role in providing a safe space for a lot of activists in the 1950s and 1960s?

LP: It's so astounding. One of my mentors, Donald Halfkenny, explained this so well. He said without Black farmers, there would have been no Civil Rights Movement at all.

You think about a freedom rider going down to register people to vote. It's not like you could rent a conference center or eat at a restaurant — you needed a refuge. And so Black farmers provided the meeting space. They provided armed protection. They leveraged their land as collateral to bail people out of jail. They fed people. They fixed their shoes. They kept a lookout and would cut down a tree to block the road if the night riders were coming after you.

So quite literally, there would be no Civil Rights Movement without land-owning Black farmers.

You know, Malcolm X said that land is the basis of freedom, justice and equality. And so how do we as landowners, Black and brown farmers, really use our land to leverage freedom even beyond the food space?

SP: Yet this history is even more complicated, given the history of slavery, because I would assume that a lot of African-Americans look at farming as a holdover of the whole history of enslavement and then later sharecropping. To work the land conjures up images of picking cotton on plantations.

LP: Oh, you're so right. Time and again, when Black folks first come to Soul Fire Farm, they think about slavery. My friend Chris Bolden Newsome, who is a Black farmer in Philly, explains it so well. He says the land was the scene of the crime.

I would add, though, that she was never the criminal. In fact, she was probably the reason we survived. It was our connection with the land, our connection with the bones and wisdom of our ancestors beneath the land. And so when we did flee those cross burnings and people trying to take our lands and our dignity and went to the paved streets of Boston and Pittsburgh, we left a little piece of our souls and our culture behind.

My generation is being called the "returning generation" that's going to claim the best of that connection to land. We’re going to rewrite the story so that it's one of dignity and belonging and not circumscribed by the oppression that our ancestors experienced.

Farming is elegantly simple. You put in a seed, you tend it, you harvest it, you feed the community. It's good.