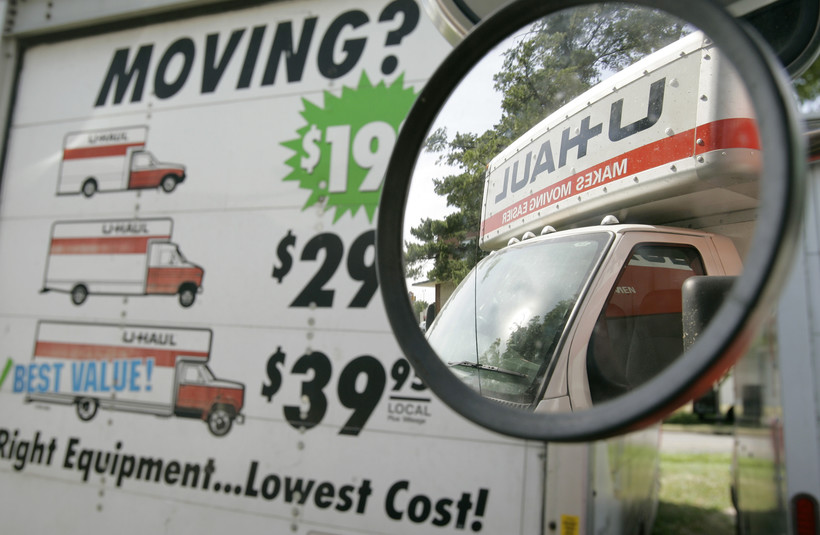 In this June 14, 2006, file photo, a U-Haul truck is seen in the side mirror of a another truck sitting on a dealer lot in Des Moines, Iowa. The average cost to for a local move from a two-bedroom apartment or three-bedroom house ranges from $400 to $1,000, according to HomeAdvisor’s True Cost Guide. While you’re choosing a place to live and deciding what to pack, having a plan for expenses can ensure your budget doesn’t get lost in the shuffle. Charlie Neibergal/AP Photo

How To Become A Local After Moving To A New Place

Author Explains How To Set Down Roots, Find Community Wherever You Live
By Rachael Vasquez
Share:

Moving to a new place can be hard. You don't know your way around town, you have no idea what people do to have fun and many times you're far away from your friends and family.

It's a process Charles Robert MckeIvy is in the midst of.

MckeIvy recently moved to the Madison area and submitted a question to WPR's WHYsconsin, asking "How does one become a local? What do ... people need to know (to) acclimate?"

Getting acclimated to your new home is a process that can take years, but Melody Warnick, author of the book "This Is Where You Belong: Finding Home Wherever You Are," says there are ways to jump start that process.

Warnick describes herself as a once-frequent mover who fell into the trap of the "geographic cure," or the belief that things in your life will be better after you start over in a new place.

"I think that's something that a lot of us love to think," Warnick said in an interview on WPR's "Central Time." "'I have problems here in this current place, I don't always like my neighbors, or my job and stuff. But if I move to that new place, I get that clean slate and everything is going to be better.'"

After the sixth move in her life since college, Warnick decided to stop moving. She was going to stick it out and find a way to be happy in her new hometown instead of waiting for the place she lived to make her happy.

She said MckeIvy has already taken the first step down that road in realizing that becoming a local will take intentional effort.

"I think a lot of times we move, and we just think this is going to happen automatically for us," Warnick said. "Charles at least knows that he might have to do some work here, which I think is great."

Warnick describes a three-pronged approach for MckeIvy and anyone who's recently moved or who's looking to build a stronger sense of community where they live: people, places and participation.

The first step, Warnick said, is to start building human connections with the people around you.

"When you're moving to a new town, it can be really lonely and ... you miss the place you moved from," Warnick said.

The faster you can find people you have a connection with, the better off you'll be, she said.

Finding an adult soccer league, a place of worship you'd like to attend or volunteering for a local cause are all great starting places, Warnick said. But she also suggests starting with getting to know your neighbors. Even if you don't ultimately become close friends, she said, you'll feel more connected to where you live and those connections become part of a larger network of people who can help you out in a time of need.

"There was a day when I was in an appointment that ran long, and I needed someone to help pick up one of my daughters, and neighbors were pinch-hitting for me," Warnick said.

Even if you don't think you'll have something in common with a neighbor, Warnick said it's a good idea to make a connection. She told the story of meeting a new neighbor with dreadlocks and ear gauges, describing herself in contrast as a "classic middle-aged mom." Unsure if they'd have anything to talk about, Warnick brought her neighbor a plate of banana muffins. She said her neighbor really appreciated the gesture and they struck up a conversation about all the people who'd lived in her house before her family.

"Even though we didn't become BFFs after that, it became this sort of sweet relationship of 'Hey, we know each other, and we have each other's backs,'" she said.

The next step is getting out and finding places you love in your new home. Finding local restaurants you love, shopping at local mom-and-pop shops instead of big chains and getting outside to explore nature where you live are all worthwhile strategies, Warnick said.

In her book, she acknowledges the tradeoff between supporting small businesses in your town that might have higher prices and the ease of one-click purchases that you can count on being at your doorstep in two days.

"Amazon required no parking lot battles," Warnick writes. "It never tried to engage me with chirpy salesperson chatter or flashed me a look of naked disappointment when I returned the shoes that didn't fit."

But she also points to research showing that more of the money spent at a locally-owned store stays in the community than at national or multi-national chains. One study cited looked at businesses in Salt Lake City, finding that just 14 percent of revenue earned at big-box retailers made its way back to the local economy. Alternatively, for a number of locally-owned businesses in Salt Lake City, 52 percent of their revenue stayed local.

"You start buying stuff in your town, particularly from small independent stores owned by people who live there, and all of a sudden more local people have jobs," Warnick writes. "So the city collects more taxes. Then, the schools have more money for improvements. The streets get repaved, the parks department builds a new baseball diamond, and so on."

It's also worth considering how you find the local shops and restaurants you love, and Warnick said walking is one of the best ways to do it.

"When you walk, it's at a human pace that allows you to really observe your surroundings, and when you observe them you really start to feel a sense of ownership," Warnick said.

Becoming Someone Who Participates

The final step Warnick suggests is to become someone who participates and taking the initiative to create something new in your community.

She pointed to local efforts to create art, getting engaged with your local government and volunteering for a local cause as ways to grow your participation in your own community.

For Warnick, this took the form of starting a chalk festival in her town, where people could draw pictures in sidewalk chalk on the street. She also engaged in guerilla signage efforts, encouraging people to walk more with signs she created herself and placed throughout her town without permission.

Based on an idea from Raleigh, North Carolina, Warnick's signs pointed out a local nature center, and informed people that a historic cemetery was just an eight-minute walk away.

"(This is) another part of what I think helps us feel connected with our place," Warnick said. "Not just walking, but making things happen in our town, creating something new."

Warnick said those steps are often referred to as "placemaking."

"Just little actions we can take that make our place better," she said.