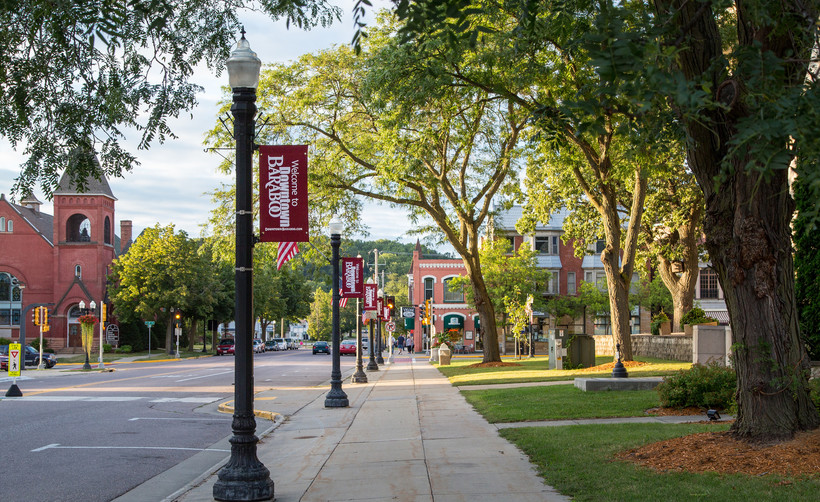 A little over four months ago, a photo of students in Baraboo became a focal point in the national conversation on racism and anti-Semitism.

The picture showed a group of high school boys on their way to prom, many holding up their arms in what looked like a Nazi salute. The photo drew condemnation from public officials, celebrities, even the Auschwitz-Birkenau Museum in Poland.

What happens to a community when it becomes the center of a national controversy? Reporter Joseph Bernstein of BuzzFeed News traveled to Baraboo to find out.

His new piece is called "A Sand County Photograph: The Baraboo Nazi Prom Photo Shocked The World. The City’s Response Shocked Its Residents."

Bernstein told WPR's "All Things Considered" that, initially, many in town were shocked — some because such a photo existed, others because their town would be the one to face such a sharp response.

"People in town, maybe quite naturally, the reaction was, 'why here, why us?'" Bernstein said. "There's a detail in the piece I really like, where people in Baraboo said, this is really unfair because the next town over is even more racist than we are. There was this sense that they didn't deserve what had happened."

Fair or not, it had happened.

And residents of Baraboo had to confront the reality that people around the world were now asking why a group of their town's male students were making a gesture associated with hatred.

For Kelly Dwyer, a local college professor and a member of Baraboo's Jewish community, that meant a difficult conversation with a student she knew personally.

"She was family friends with one of the boys in the photo who was saluting and had known him since he was 3, had known him to be a conscientious and good kid," Bernstein explained. "The story of how he apologized for that photo and how he tried to take responsibility for it, is one of the through-lines in my piece."

According to Bernstein, that student, Philip Zolper, helped organize meetings of the students who were in the photo to talk about what happened, and to take action in response to the outcry.

"What Philip wanted to do was put together some kind of group statement, taking responsibility for the photo and trying to provide an example for places where incidents like this happen in the future," Bernstein said. "What he maybe didn't expect was to run into a fair amount of resistance from the parents of some of the boys and the school administration itself in Baraboo."

Bernstein said school administrators would at times acknowledge the public outrage over the photo and promise action — while also defending the students. But critics said the district was in fact, distancing itself from the photo.

"The photo was taken on the steps of the Sauk County Courthouse, not on school property. The event, while a Baraboo tradition to take kids' photos on the day of the Baraboo High School prom, was not an official school district sponsored event," he said. "Because of that, the school district had a sort of one foot in, one foot out relationship with the event. And I think by not taking more direct ownership for the response of the photo, it made some people in Baraboo feel like they were in denial about it."

Ultimately, the district decided not to issue any sanctions against the students.

In a statement, the district said "we cannot know the intentions in the hearts of those involved."

To Bernstein, this raises one of the big questions about racism and racist symbols — what is the intention of a word or gesture, versus the perception? And in the case of a class photo — how many different intentions are there among the students?

"There are so many different dynamics happening in the photo," Bernstein said. "Kelly Dwyer attempted to collect the stories of the boys in the photo. What she told me is that there are 60 boys in the photo, there's 60 different stories. To a degree that's certainly true. You have boys who are not saluting, most famously the kid in the top right corner, Jordan Blue. You have kids who are clearly waving and you have kids who are very obviously throwing up a Sieg Heil."

"What my piece ultimately argues is that because of the international resurgence of white supremacy that is bolstered by this contextless conversation online, the intentions of the boys ultimately didn't matter," he continued.

Bernstein's reporting found that Jordan Blue — the Baraboo student who said he refused to participate and told reporters as it spread that some of his classmates most certainly knew that making that salute was wrong and did it anyway — made those comments at a cost.

"One of the more upsetting things about this story is that Jordan Blue's personal courage was not rewarded in town, and in fact, he was made into something of a pariah at school," Bernstein said. "He told me that anti-gay persecution against him increased, longtime friends sort of left him behind ... he really paid a large price for coming forward. And one of the most damaging things that happened is people in town started spreading a variety of completely false rumors about him."

Students have since heard from anti-racism activists, they've gone on field trips to the Holocaust Museum in Illinois. There have also been community meetings, which Bernstein said have led to progress — but also contention.

"If you're going to have a meeting that invites an entire community, and a lot of the community thinks that the boys in the photograph are being unfairly treated, it isn't necessarily going to assuage the feelings of people who feel targeted by what the boys are doing," he said. "In the story, I talk about two young women who go to an event called Baraboo Talks, and they participated in an event where someone compared the boys to survivors of sexual assault. And for these girls to hear that at this time, I think was tremendously counterproductive and in fact made them feel less positive about the community."

Bernstein said Baraboo is far from the only community to confront this problem — but it is a problem. And one that's far from over.

He told a story he heard from Eva Huffaker, who is, along with her twin brother, one of two Jewish students at Baraboo High School.

Weeks after the photo had spread and in the midst of enormous public attention on racism and discrimination, she had not one but two unsettling encounters with fellow students.

"She was kind of minding her own business, and a boy stared at her, stood up and put up a Sieg Heil," he said. "Shortly after that, another boy made a completely tasteless remark about the Holocaust to her. She reported, and her mother reported — the response from one school administrator was that the boys didn't understand why what they had done was so hurtful, so an apology from them wouldn't mean anything."