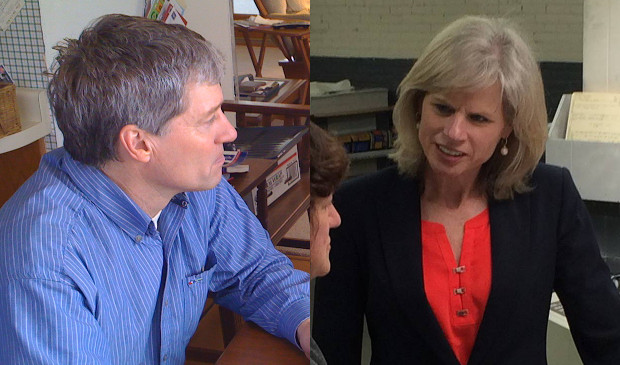 How Act 10 Would Change Under A Gov. Burke Or Gov. Hulsey?

If Democrats defeat Gov. Scott Walker in November’s election, one of the first items on their to-do list is to water down Act 10 -- or flat-out drown it, depending on whom one asks.

Last week, the state Supreme Court upheld Walker’s signature legislation, which limits collective bargaining for most public-sector workers and requires them to contribute more torwards their health care and pensions.

Mary Burke, a Madison School Board member and former Trek Bicycle Corp. executive, called the ruling “disappointing” on Monday, but didn't directly answer a question about whether she would seek to repeal Act 10.

“There are many different parts of (the law), so that’s why I’ve said I would work to restore collective bargaining,” Burke said.

She voiced support for at least one aspect of Act 10, but also opposed the way the 2011 bill was pursued.

“The contributions to health care and to pensions that I think were only fair to ask -- certainly, we did have a state budget to balance -- but it didn’t have to be divisive,” she said.

Burke added that she is worried that Wisconsin’s public-sector compensation isn't competitive enough with other states or the private sector.  She said it’s critical to “attract and keep good people in our public sectors.”

In order to get on the November ballot, Burke needs to survive a challenge from state Rep. Brett Hulsey, D-Madison, in next week’s primary.

Hulsey vowed as governor to get right to work on eliminating Act 10 entirely.

He insisted that on his first day in office, he would call a special session of the Legislature in order “to get health care, retirement and the rights back” for public employees.

Hulsey also maintained that he is the more credible candidate of the two when it comes to restoring collective bargaining.  He said he debated the issue for more than 62 hours as a member of the state Assembly, proposing amendments and other avenues to fight it.

Burke, according to Hulsey, is out of touch for running a non-union company that’s outsourced nearly all of its manufacturing to China at “slave labor working wages.”

“I don’t think we can trust her to fight for working people.  I’m a former union vice president and I’ll fight every day,” Hulsey said.

Wisconsin’s primary election is Tuesday, Aug. 12.  Walker, a Republican, is running unopposed in the primary.