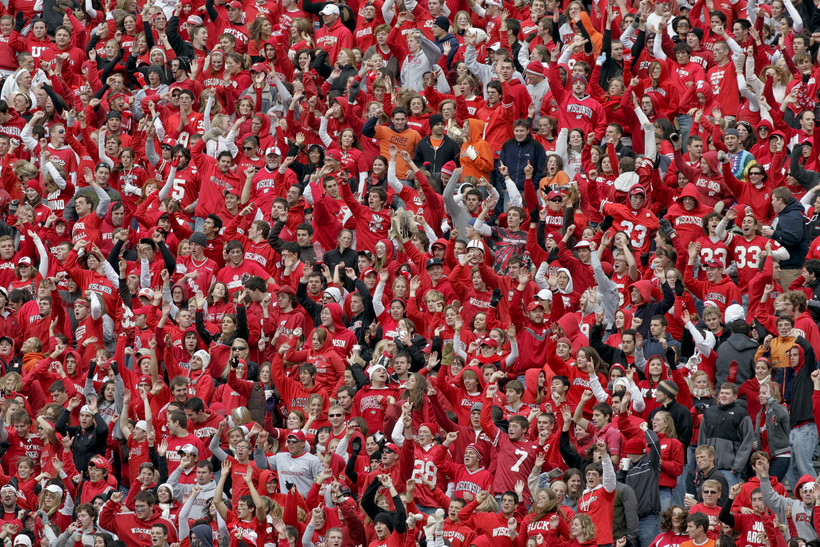 How A 90s Hip-Hop Song Became A Badger Tradition

In Its 21st Year, It's Hard To Imagine A Badger Football Game Without 'Jump Around'
By John Davis
Share:

College football is all about rivalries and traditions.

As the sport celebrates the close of its 150th anniversary, the Wisconsin Badgers are headed to the Rose Bowl for the 10th time on New Year’s Day, where they will play the Oregon Ducks.

The Badgers have many long-standing rivalries and game day customs — like the battle of the border for Paul Bunyan's Axe or the Wisconsin Band's Fifth Quarter. But there's another tradition, and perhaps the most aerobic for fans in college football’s long history: "Jump Around."

WHYsconsin recently received a question about the very tradition. Alex Olejniczak, from Chicago, asked "Why do they do 'Jump Around' before the start of the fourth quarter at UW-Madison football games?"

So we did a little research to find out.

For starters, "Jump Around" is a 1992 song by the hip-hop group House of Pain.

It was played for the first time at Camp Randall Stadium during the Oct, 10, 1998 homecoming game against Purdue where it became an instant crowd favorite and the start of a tradition that is still going strong.

Kevin Kluender is the assistant athletic director for marketing and promotions for the UW Athletic Department. He described the fans' reaction to the song during that first game as looking like popcorn popping.

"The thing I like about 'Jump Around' the most is how Badger fans have made it their own. They take ownership of it. It’s part of what makes it so special," he said.

"Jump Around" was put on a one-game hiatus in 2003 when Camp Randall was under construction and there was concern the stadium wouldn’t hold up to the vibrations jumping people cause during the song. Fans were upset. But after an engineer confirmed it was safe to resume the song, the two-day hiatus ended.

The song was also played at the Rose Bowl the last time Wisconsin faced Oregon in 2012. And it may return again this year.

"As far as the Rose Bowl game, we have requested it be played, but ultimately that decision is up to them," Kluender said. "They do try to be fair and equal to both teams and their traditions."

"Jump Around" is part of t-shirts and other Badger memorabilia; and in maybe the sincerest form of flattery, other Big Ten schools have taken to mocking "Jump Around."

For Kluender, the song has far exceeded expectations.

"I don’t think we look to start new traditions per se. We simply continue to work to make the games as fun and entertaining as possible," he said. "If something resonates with fans, we will continue to pursue it."