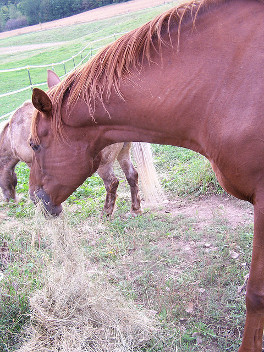 Wisconsin horse shelters are seeing an increase in the number of calls from owners who cannot take care of their animals. Shelter operators want to take them in, but some say they are facing challenges of their own.

Unlike dairy farmers, horse owners cannot simply sell their animals for butchering if they cannot take care of them. Therefore, they are left to find shelters such as Spirit Horse Equine Rescue of Janesville. Founder and president DeeDee Golberg says she has seen about a 25 percent increase in the numbers of calls from people wanting to surrender their horses. Golberg says she has had to say no. "We are always looking for more foster facilities because the demand is far, far greater than what we can provide."

The drought has made the situation worse. Hay is harder to come by and often more expensive. Like the owners themselves, shelters must also consider this. Western Wisconsin horse shelter operator Beck Dowd says the price of hay will help determine whether she takes horses in or not. "I have all the space in the world. Whether I have the hay to feed them all in the winter is the catch."

Agricultural officials are urging horse owners who need hay to find it sooner than later, so they have enough for their horses to last through winter and next spring.