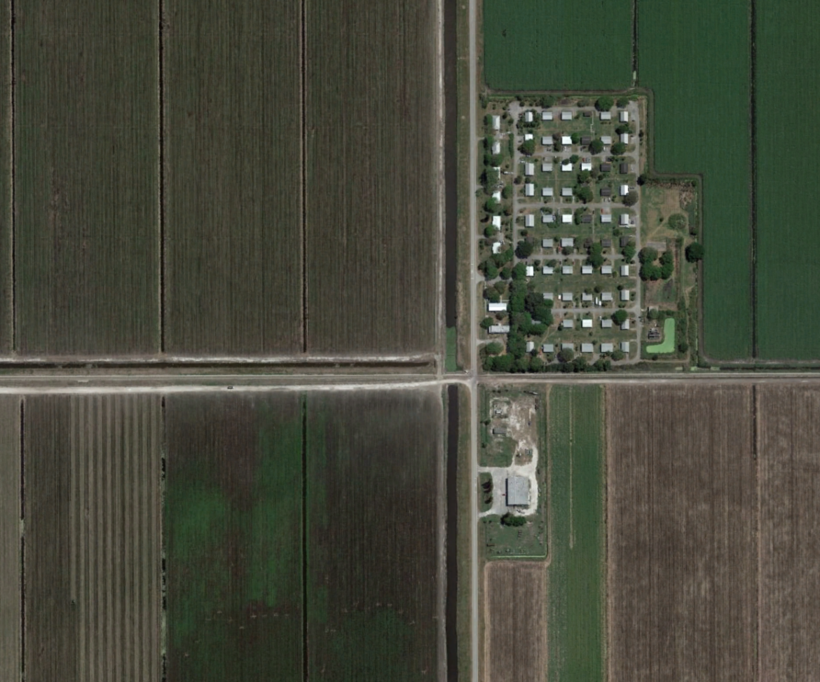 In Florida, where prohibitive residency restrictions have led to homelessness among sex offenders, some seek refuge in Miracle Village, which is home to more than 100 people, most of them sex offenders. Google Earth Pro

10 Percent Of Offenders Scramble To Find Places To Charge Bracelets, And Local Laws Make It Hard To Find Housing
By Riley Vetterkind
Share:

Michael walked out of the Oshkosh Correctional Institution in April 2017 at age 60 with $140 to his name, a record as a sex offender and a GPS monitoring bracelet strapped to his ankle.

Michael, who requested that only his middle name be used to avoid public attention, was convicted of two child sex crimes, the most recent in 2006, for which he spent 10 years in prison. Upon release, he traveled to Vernon County, where he had committed his most recent sex crime, and stayed in a Westby motel while he searched for permanent housing. His probation officer gave him a few months to find a place.

The housing search ended in failure. Michael, who is disabled and relies on Social Security, was unable to navigate the process with residency restrictions and landlords leery of renting to sex offenders.

His search was further complicated by Wisconsin’s requirement that he reside at least initially in Vernon County, where he was convicted, along with DOC rules of supervision that attempt to prevent serious sex offenders from living too close to one another.

He continued his search, but came up empty handed, and so like many sex offenders, he became homeless, living in a tent at a $10-per-night campground during the summer and early fall of 2017. A couple of times a day, he plugged his GPS monitor into an outlet meant for trailers. He said wearing the bracelet is "shameful, and it does hurt my ankle."

DOC data show that of the 1,258 offenders on GPS monitoring in January, 131 had no permanent place to live. This means about one in 10 offenders may not have regular or easy access to an outlet to charge a monitoring device. A DOC spokesman said agents typically allow homeless offenders to charge their bracelets in parole offices.

DOC records show some homeless offenders avoid this logistical challenge by absconding — removing their bracelets or letting them run out of power — which completely defeats the purpose of GPS monitoring.

Michael’s struggle to find housing illustrates a problem that is widespread in Wisconsin communities, where dozens of sex offenders are homeless due in part to ordinances restricting where they can live.

DOC officials have acknowledged that highly restrictive municipal residency ordinances in more than 150 Wisconsin communities such as Green Bay and until recently, Milwaukee, are contributing to the problem, according to emails obtained by the Center under the public records law. These local laws prevent sex offenders from residing too closely to places including parks, schools and day-care centers, leaving virtually nowhere for them to live.

Green Bay’s requirement that offenders live at least 1,500 feet away from schools, parks and day-care centers means offenders are banned from nearly the entire city, although they have the opportunity to appeal in front of a board.

In a recent ruling from the U.S. District Court for the Eastern District of Wisconsin, a judge essentially struck down the village of Pleasant Prairie’s 3,000-foot buffer zone as being too restrictive, saying 90 percent of the village was off-limits to child sex offenders and the remaining land was largely nonresidential.

Some municipalities have pre-empted legal action. Waukesha and New Berlin, for example, reduced child safety zones from 1,500 to 500 feet. The attorneys in the Pleasant Prairie case, Mark Weinberg and Adele Nicholas, are also representing 11 registered sex offenders in a case that ended the 2,000-foot residency restriction in the city of Milwaukee, where sex offenders, some on GPS monitoring, are homeless.

The Milwaukee Common Council recently approved a $74,400 settlement in that case after the city significantly rewrote its residency requirements.

The plaintiffs in the Milwaukee case are sex offenders who are either homeless or attempting to move. Sylvester Jackson, a 51-year-old homeless offender, stated in an affidavit that he has tried for years to obtain housing but to no success. A diabetic, Jackson often sleeps in a broken-down car.

Another offender, 35-year-old Chris Bills, wanted to move out of the three-bedroom townhouse he shared with seven others, but was unable to find another option due to the residency restrictions and the desire to stay in the area so his autistic son could attend his special school.

Other plaintiffs stated they investigated each address Milwaukee deemed compliant, but that none of them was available to rent. One such location ended up being the Milwaukee airport. Clockwise from top left, Sylvester Jackson, Don Mulder, Ventae Parrow, Brian Anthony, Matthew Schechter and Glenn Davis are some of the 11 registered sex offenders in a pending case against a 2,000-foot residency restriction in the city of Milwaukee, where countless sex offenders, many on GPS monitoring, are homeless. Wisconsin Department of Corrections

Months after the plaintiffs’ motion seeking an immediate halt to the law, Milwaukee’s city council in September voted to repeal the city’s sex offender "buffer zone," doing so without Mayor Tom Barrett’s signature.

The move let sex offenders essentially live anywhere in the city, although it did leave in place a requirement that offenders must return to the county where they committed their offense upon release. The 2015 state law that maintains a 1,500-foot buffer zone for a specific category of offenders deemed sexually violent also remains in effect.

The two attorneys argue such residency restrictions and "original domicile" clauses, which make it unlawful for a sex offender to live in a city unless he committed his crime there, are unconstitutional and "not rationally related to a legitimate state interest."

"There’s just no evidence to support the (claim) that these laws are making communities safer, preventing crime or protecting anyone from crime," Nicholas said. "This law just makes people homeless."

Federal courts are beginning to agree. In August 2016, the 6th Circuit U.S. Court of Appeals struck down Michigan’s application of several restrictions for sex offenders on the basis they violated the Constitution’s ban on retroactive punishment.

The provisions include having sex offenders’ names on a registry, prohibiting sex offenders from living, working or "loitering" within 1,000 feet of a school, and requiring them to notify law enforcement in person when they update personal information. Michigan’s sex offender registration law "brands registrants as moral lepers solely on the basis of a prior conviction," wrote Alice Batchelder, one of the judges for the case, adding "it consigns them to years, if not a lifetime, of existence on the margins."

Batchelder also challenged Michigan’s contention that its sex offender laws deter recidivism. She cited studies that suggest sex offenders are actually less likely to recidivate than other criminals, and that sex offender registries and their accompanying restrictions make it "hard for registrants to get and keep a job, find housing and reintegrate into their communities."

Batchelder emphasized Michigan could provide no evidence that the difficulties its sex offender restrictions imposed had any positive outcomes.

In Florida, where prohibitive residency restrictions have led to homelessness among sex offenders, some seek refuge in an isolated community in South Florida called Miracle Village, which is home to more than 100 people, most of them sex offenders. In Florida, where prohibitive residency restrictions have led to homelessness among sex offenders, some seek refuge in an isolated community in South Florida called Miracle Village, which is home to more than 100 people, most of them sex offenders. The houses are in rural Palm Beach County, and surrounded by sugar cane fields. Google Earth Pro

In Wisconsin, Michael eventually managed to establish a more permanent residence. He found a friend in Kendall in neighboring Monroe County who agreed to let him move into his house. He asked his photo and location not be disclosed.

Like some other sex offenders, Michael encountered difficulties with GPS monitoring, spending the weekend of Oct. 21 in jail for an unspecified probation violation. He sat in jail throughout the weekend until his probation officer returned to work Monday.

"I was scared," Michael said of the arrest. "I didn't know what happened … And then I started thinking, 'Well, this is what I'm in for for the rest of my life.'"

He later learned his arrest was triggered by a 10-minute visit to his sister’s house in Wilton. Unknown to Michael, a church nearby houses a day-care center, which is one of his "exclusion zones." His probation officer then created a "safe zone" around his sister’s house, preventing at least one future arrest.

"As far as the GPS goes, I think it's ridiculous. I think it's overkill. I did 10 years, I’ve got 15 on paper (probation)," he said. "What more do they need? Why is the bracelet necessary?"