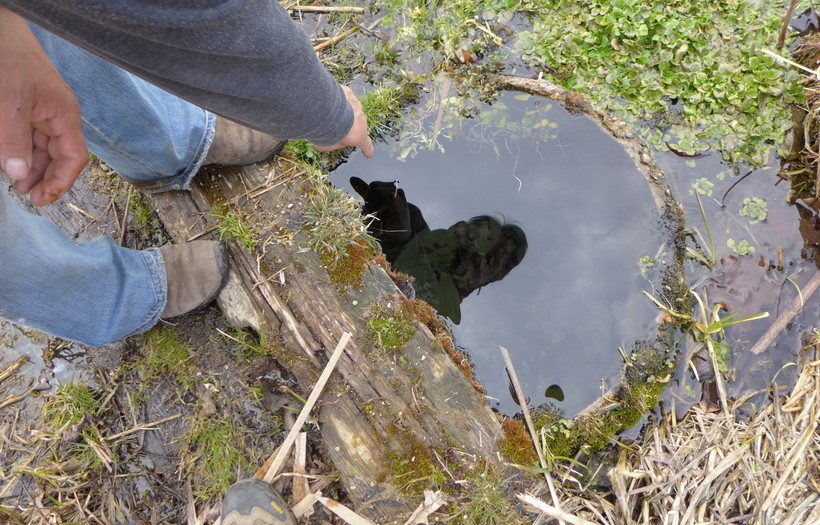 Bill Greendeer peers into one of the freshwater springs on his land where beds of watercress grow. Photo: Maureen McCollum/WPR.

Ancestors of the Ho-Chunk Nation survived off the land in western Wisconsin for thousands of years. With modern farming techniques and high-tech distractions, however, some tribal members are losing their connection to the native plants. There are efforts underway, though, to reintroduce indigenous plants to everyone.

Bill Greendeer is making his way through a patch of cattails on his land in western Wisconsin. Soon enough, the tops of the plants will be green and edible. Like many of the plants growing here, cattails have more than one purpose.

“Dig down into here,” Greendeer said. “There's medicine that grows in the root of this one.”

Greendeer is surrounded by food. A few feet away, there's a cluster of watercress growing on top of a bubbling, cold-water stream. There's sumac in the distance; milkweed and mint will soon be popping up.

“It's just amazing the foods that are out there and nobody has any idea about it,” Greendeer said.

As a member of the Ho-Chunk Nation, Greendeer's knowledge of native plants was part of his upbringing. He and his siblings would join their mother to collect ferns, flowers, and aronia berries in the forest. His father was a healer and taught him about the medicinal and spiritual qualities of plants.

Now, Greendeer wants to pass his knowledge of the indigenous plants on to others. He wants to use his property as a teaching tool.

“I want to try to teach people that you can actually survive out there without having to turn your fields over,” he said.

“They talk about so many people starving on this side of the earth. If we actually got smart and learned what's out there, that we're walking in, we'd be able to provide a lot of food for people,” Greendeer continued.

Juliee de la Terre is helping Greendeer develop a plan for his land. Near the top of the to-do list is getting people to reconsider what they deem to be weeds.

“This is the seeds of the wild carrot, this is what it looks like,” de la Terre said, sifting through seeds. “Some people call it Queen Anne's lace and they say it's a pretty nasty weed and they hate it, but you can eat it. It's a pretty strong tasting, little white carrot, but it's edible.”

De la Terre, who is non-Native, and Greendeer are not alone in their efforts. Other members of the Ho-Chunk Nation are working to make sure the knowledge of indigenous plants and the act of gathering them is not lost.

“It's still alive and well,” Greendeer said, “but to a lesser degree.”

Bill Quackenbush is a tribal historic preservation officer for the Ho-Chunk Nation. He says the knowledge of the native plants is not being passed down to youth as much as it was in the past.

“[They have] the convenience of going to the grocery store and working forty hours a week and then buying canned goods,” he said. “This process here is what's being taught to our children nowadays, so the assimilation process takes place a little bit more.”

The Ho-Chunk Nation is taking steps towards reintroducing the plants on the land it does own. For example, restoration work on its White Otter property brought back diverse native edibles. The land is used as an educational tool and also gives the tribal community a place to collect plants. Another similar project is in the works.

De la Terre says non-Native people have a lot to learn from the Ho-Chunk, and she is seeing those efforts take place in their own ways.

Greendeer says bringing back the native plants is just good for the environment, and the effort is going to take all cultures working together.

“I think it's up to everybody to take care of (the plants),” he said, “not just me or not just the Natives. We all have to learn to walk lightly and look around and see what we have.”

Editor's Note: This story is part of WPR’s series on sustainability, in partnership with Quest, a multimedia science journalism and education project of KQED in San Francisco. You can see stories from other Quest partner stations at its website. Funding for QUEST is provided by the National Science Foundation.