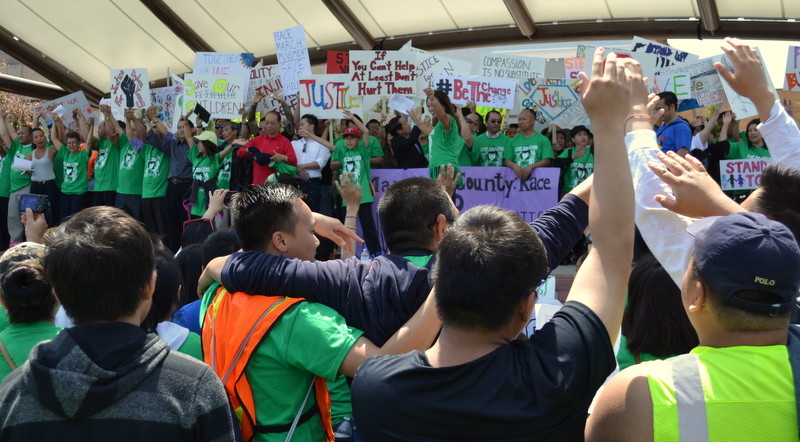 Members of the Hmong community from across the country rally in Wausau over the state's criminal justice system.

Hundreds of Hmong people and their supporters turned out for a protest march in Wausau Tuesday, with organizers of the rally calling for changes in the state's criminal justice system.

Part protest, part peace march, the Save Our Children rally was inspired by a stabbing incident in which 15-year-old Hmong resident Dylan Yang killed 13-year-old Isaiah Powell, and was tried and convicted in adult court. Yang’s supporters say he was bullied in school. He could be sentenced to 60 years for reckless homicide.

"Reckless homicide, so how does that become a felony and serving in adult time?" asked organizer Paula Yang of the Hmong Sisters of Fresno, who came from California for the event. "I have a hard time understanding that, so we are going to make a movement with legislators to make that change. Imagine that's your son."

Yang and other organizers said they would lobby to change the criminal  justice system so that juveniles could not be tried in adult court. At least one powerful local political figure is supporting them.

On the stage, Marathon County Administrator Brad Karger shouted "I am Dylan," electrifying a crowd that was estimated at more than 500 people.

Karger explained, "when I was 15-years-old, my judgment wasn't particularly good. If the circumstances were right, if I was in a bullying situation, who knows what I could have done."

Karger said he hadn’t been criticized yet for his stance but, "I suspect that will be coming. What's the point of being a community leader if you don't use it for something?"

The protesters marched to the Marathon County courthouse, and to the headquarters of the Wausau School District. Buses brought demonstrators in from Minneapolis, and from across Wisconsin.