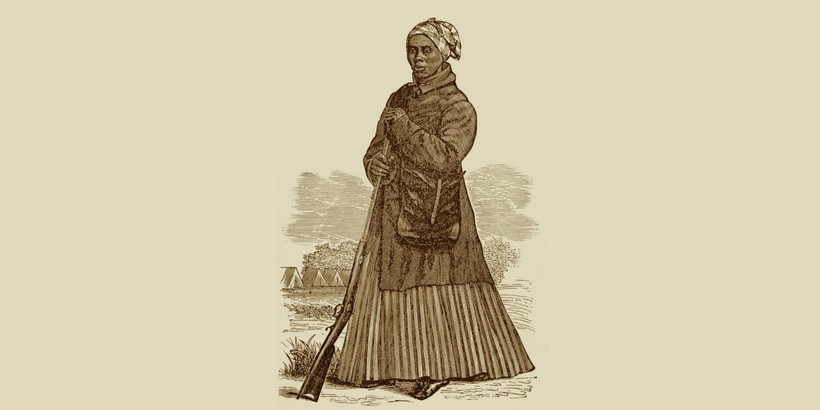 A woodcut from "Scenes in the Life of Harriet Tubman" by Sarah H. Bradford.

When the U.S. Department of the Treasury announced last month that abolitionist Harriet Tubman would be the new face of the $20 bill, a new question arose: What will she look like?

In her few posed portraits, Tubman appears stern, resolute, her hair often covered. But in other images, including a famous woodcut, Tubman is posed with a musket. Is it possible that she’ll hold a gun on the front of the new $20?

That’s unlikely, according to Fordham University law professor Nicholas Johnson. He said the image of Tubman holding a gun makes many uncomfortable because it clashes with our notion of African-American and abolitionist history. In his new book, "Negroes and the Gun," Johnson endeavors to bridge this disconnect between the "historical utility of firearms" with "the modern issues" that black communities grapple with on a daily basis.

When thinking about the history of civil rights and African-American empowerment, Johnson calls the standard narrative "glib." To most people, he said, the story goes something like, "Well, we had a civil war, and then we had Reconstruction ... and then black people just sat on the sidelines until the 1960s and we really didn’t have to pay attention to them."

Even when people speak admiringly of Martin Luther King Jr. and the nonviolent protests of the modern civil rights movement, Johnson argues that blacks are generally cast as "stoic sufferers in the face of the horrible things that were happening around them." By erasing guns from these histories, African-Americans have been cast as passive players in their own story.

In actuality, said Johnson, firearms were extremely important tools for black communities to defend themselves during the early 20th century, especially in the face of lynch mobs and other acts of violence. He described “a struggle for survival, where guns were vital, practical resources for people who were dealing with terrorism, dealing with private threats."

He can also tick off a series of prominent civil rights leaders who actively endorsed gun ownership by African-Americans, including Ida B. Wells and Fredrick Douglass. When Douglass was once asked what former slaves needed to avoid being recaptured, he said, "A good revolver, a steady hand, and a determination to shoot."

Fannie Lou Hamer, a leader of the 1960s activist group the Student Nonviolent Coordinating Committee, put it more bluntly: "I keep a shotgun in every corner of my bedroom, and the first cracker even look like he wants to throw some dynamite on my porch won’t write his mama again."

Even the pacifist King was a firm advocate of black gun ownership, although he, like others, drew a sharp distinction between self-defense, which he saw as legitimate, and political violence, which he called a folly.

According to Johnson, he wrote "The Negro and the Gun" in part to address a question he has heard from young African-Americans who wonder whether anyone fought back in the struggle for civil rights.