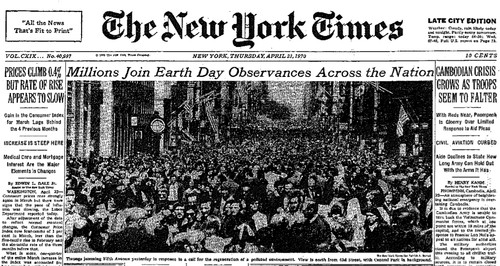 Just over 44 years ago, Gaylord Nelson, a Democratic U.S. senator from Wisconsin, challenged the nation’s youth to bring as much concern to the state of the environment as they did to the war in Vietnam.

Inspired by the anti-war teach-ins of the 1960s, Nelson proposed a nationwide environmental teach-in.

Not even Nelson could have foreseen what happened next: On April 22, 1970, more than 2,000 colleges and universities, around 10,000 schools, and hundreds of communities across the country staged teach-ins, demonstrations and other environmental events.

“The genius of Nelson was he rejected advice to create a top-down organization and just said, ‘Let’s do something that everyone who wants to participate in can. They can do whatever they want,” Rome said. “He wasn’t a helicopter parent, even though he gave birth to this (idea). That unleashed the creativity and vision and the energy of thousands and thousands of people at the grassroots (level).”

Between 10 and 20 million Americans gathered in city streets, parks and on campuses to voice their concerns over an increasingly polluted Earth. Thousands signed up to help organize Earth Day emboldened by the freedom they were given to make Earth Day their own.

“Part of it was the sheer stunning size,” said Rome, whose book "The Genius of Earth Day," recounts the story of how that 1970 teach-in unexpectedly forged the first green generation -- a major political force in U.S.

“Millions and millions ... participated. That really impressed politicians. And it helped them see that they have to act,” said Rome.

Earth Day was a shot in the arm of the environmental movement. Among other things, it led to the Clean Air Act of 1970, the Clean Water Act of 1972 and the Endangered Species Act of 1973.

“Overall, the '70s was a time of environmental achievement,” said Rome.

Not only were some of the most important environmental protection bills passed during this time, but many institutional legacies were created: Schools and colleges established environmental studies programs, media outlets started assigning environmental reporters; community centers got involved and became early recycling centers.

“Earth Day created a generation of environmental activists,” said Rome. “Tens of thousands of people became local organizers. It gave them an adrenaline high … it (taught) them a lot and made them think this is something they want to keep working on. Many of those who vouched to devote their lives to environmental causes, are still active today.”

The lessons of Earth Day hold clues to tackling some of today's most pressing issues. Given magnitude of global warming, Rome said he believes it will take the engagement of many -- and not just one “knight in shining armor” -- to find solutions.

“You can’t just have an ‘inside-the-Beltway” game," he said. "You need the power of the grassroots organizations.  Gaylord Nelson knew that.”