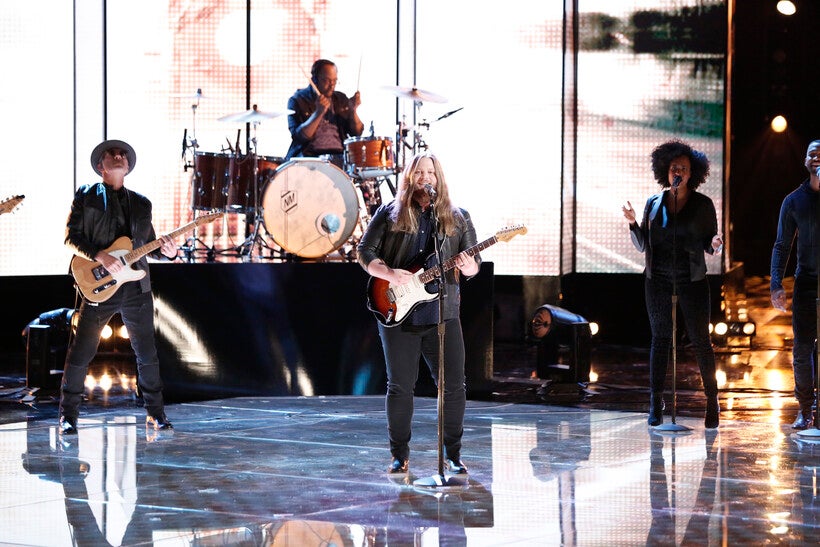 With His Hometown Rooting For A Victory, Chris Kroeze Vies For Votes To Win NBC's 'The Voice'

By his early teenage years, no one had yet heard Chris Kroeze sing — not even his parents.

The Barron native guesses he was 13 or 14 years old when he got up on stage during his school's talent show, in front of an audience including his parents who expected to see a guitar performance.

When he walked up to the microphone, his mother's stomach dropped, she later told him. But his performance of Kid Rock's "Only God Knows Why" was well-received, and set the stage for an entertainment career now garnering international attention as Kroeze becomes one of the final four competitors on NBC's "The Voice."

Fans of Kroeze have been following his journey on "The Voice" since the season premiere in early October. "The Voice" begins with competitors who choose to be coached by Adam Levine, Blake Shelton, Jennifer Hudson and Kelly Clarkson. Winners rely on votes from fans via NBC's website or social media platforms. Photo courtesy of NBC — "The Voice"

In the 15th season of the show, which airs at 7 p.m. Mondays and Tuesdays, Kroeze initially won over the judges with a rendition of "Pride and Joy" by Stevie Ray Vaughan. He later joined Team Blake, and has since survived every cut, so far down to the final four contestants.

Kimberly Sampson, who's known Kroeze since he was born, joined 23 others Monday and Tuesday as they cheered for their hometown star advancing to the finals.

"I'm still hoarse from the show," she said Thursday.

While some such as Sampson get to watch Kroeze's live performance from the studios, cheers also flow out of venues in Barron from his local fans there. One of them is Norm Yamada, a retired band teacher at Barron High School who got to know Kroeze after being asked to offer advice for his young band.

"It's been a really great relationship — he's just such a nice kid," said Yamada, 69, who saw Kroeze's first performance live in Los Angeles. "He's still a kid to me."

Kroeze's equipment trailer is housed with Yamada, who used some of the gear during a tree-lighting ceremony that was recently held in Barron for Jayme Closs — a 13-year-old who has been missing since her parents were killed in their home Oct. 15.

Kroeze dedicated one of his performances to Barron and Jayme with the Beatles' song, "Let It Be," encouraging hope as the investigation into her disappearance continues.

"We all have mixed emotions because we're sad and worried," Sampson said about Jayme. "But (Kroeze on "The Voice") is such an amazing experience that we wouldn't have thought Barron would have."

Kroeze's success helps balance the despair felt by many in the community over Jayme's disappearance, Yamada said. During the tree-lighting ceremony, Kroeze even sent a video to greet the crowd before a recording of his dedication performance was played.

"It's been really uplifting for the community," Yamada said of Kroeze's success.

Kroeze remembers a guitar sitting in the corner in the basement of his home — it belonged to Kroeze's dad and the kids weren't supposed to touch it. They couldn't resist.

"We would always sneak over there and pluck the strings a little bit," he said.

At 6 years old, Kroeze, now 27, got his first guitar. His dad cut out chunks of tape to mark where the fingers should be placed on the fret board.

"I kind of just locked in and I was just obsessed with guitar," he said. "It's been my whole life ever since."

Kroeze strummed the four chords that his dad taught him to play until the movements felt natural. He eventually wanted to expand his repertoire, and ended up honing in on The Beatles' "Yellow Submarine."

While learning to read the chord charts, his dad recommended he sing along. "I started doing that in my room," he said. "I wasn't confident. I was a little kid."

But the eighth-grade talent show proved a perfect time to explore that talent publicly.

The country-styled, mostly-self taught guitar player and singer has been performing full-time for the past six and a half years, booking more than 200 shows a year.

Most of them feature Kroeze on a bar stool with his acoustic guitar, a modest environment compared to the production, sets, bright lights, cameras, audience and celebrities of "The Voice."

But Yamada said he thinks the spotlight is a good thing for Kroeze, who admitted that he's more a musician than an entertainer.

"We've subtly said, 'Maybe you should talk to the audience a little more,'" Yamada said. "He's just into playing."

And while Kroeze refers to music as his career and passion, the musician who says one of his favorite pastimes is goofing around with his children puts his family first.

"If it comes down to making a choice between music and my family, my family wins every time," he said "That's just a no-brainer to me."

On Monday, Kroeze will perform with the other competitors who each sing three songs — one is a cover, another is a duet with their coach and the final song is their own original single. The season's winner is revealed on Tuesday.