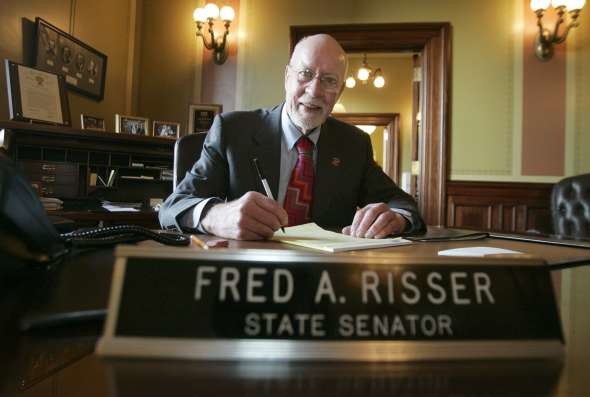 Longtime State Lawmaker Talks About His Proudest Moments Over The Years
By Gretchen Brown
Share:

This year, like the years before, Sen. Fred Risser plans to bike one mile for every year of his age.

It makes no difference that Risser turned 90 years old Friday — or that he’s still an active state senator after more than 60 years in Wisconsin politics.

Born and raised in Madison, Risser served in the U.S. Navy in World War II and became a practicing attorney before his election to the Wisconsin Assembly at age 29.

Risser, the longest-serving state lawmaker in the country, shows no signs of slowing down. He hasn’t missed a senate vote in 50 years. He credits his wife, Nancy, for that.

"I couldn’t do it without her," he said.

Things have changed since Risser was first elected to the state Assembly in 1956. Back then, Dwight Eisenhower was president. Walter J. Kohler Jr. was governor. Elvis topped the music charts. There was no legal smoking age.

"I introduced a bill my first session to try to outlaw smoking under the age of 16, and it only got one vote," Risser recalls. "And it was mine."

Despite that first road bump, Risser went on to have a hand in passing several major bills.

Medicine advanced. Public opinion about smoking began to change. After 25 years of work on the bill, Wisconsin enacted the Indoor Air Act in 2010, banning indoor smoking throughout the state.

"And I think that has helped the state quite a bit," Risser said. "It took a long time to work on that one."

He said he’s particularly proud of his early support of and work in women’s issues.

"I was the author of the bill that took contraceptives off the indecent article list," Risser said. "They originally were illegal in the state, and you couldn’t get them with a doctor’s prescription in some cases."

Back in those days, he said, the state senate was "a white man’s club." When he was elected as a senator in 1962, there were no female senators or people of color.

"The state Legislature is much more diversified now, which is good," Risser said.

He has also seen state politics become increasingly partisan over the course of his career.

He said that worries him. Voting in the Legislature is overwhelmingly party-line. Though Risser is a Democrat, he said lawmakers ultimately need to answer to the people, not the party.

"The only answer, of course, is selecting representatives who will represent their constituents, and act in the best interest of the state," Risser said.

"Until we get enough people voting, we’re not gonna get any change," Risser said.