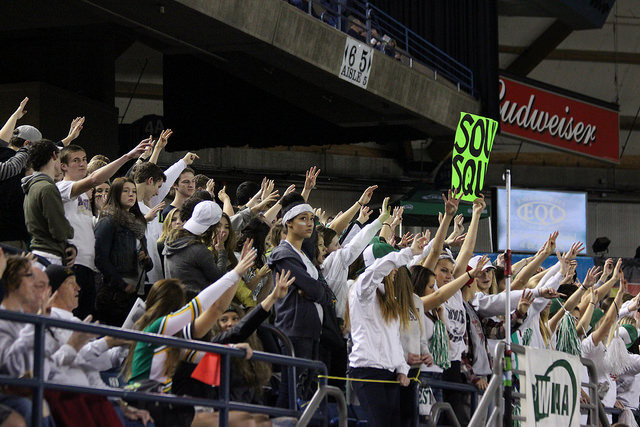 The Hilbert High School student, April Gehl, had to sit out four-and-a-half games because of the tweet, which used an obscenity to blast the Wisconsin Interscholastic Athletic Association. The tweet was in response to a WIAA policy that itself has gotten national attention from news outlets, and even late-night television hosts.

"The Wisconsin Interscholastic Athletic Association," said Stephen Colbert during his monologue Monday night, "has now banned high school students in the stands from chanting things like 'Airball!' or anything meant to taunt the other team."

Colbert and other national media outlets didn't get that quite right, according to the executive director of the WIAA: "There is no new enforcement expectation, no crackdown on fun or chants or anything of that kind," Dave Anderson said.

Anderson said the WIAA sent out a memo on Dec. 22, reminding schools of the group's sportsmanship policy that's been in place for years.

"That memo did contain examples as they appear in the members' sportsmanship manual that include, you know, certain chants," he said.

Anderson said that those chants — including racist and sexist chants — can be seen as "crossing the line" when they're "taken too far."

Tony Sweere, the Hilbert High School principal and the district administrator, said the suspension was in line with the athletic code the school uses. He said that for "a first-time violation of any kind," a player will be suspended for one-quarter of a sports season.

Sweere said that the issue has been blown out of proportion.

"What our message to our kids was, continue to act like you always have. If we feel you're out of line, we're going to let you know," he said. "Our kids have always been good sports about things. We have a number of sportsmanship awards that we've received here."

The U.S. Supreme Court has upheld limits on student speech, according to University of Wisconsin-Madison political scientist and law school professor Howard Schweber. However, he said districts should have to justify that such speech interferes with school discipline. It's hard to maneuver in a time when even presidential candidates are less than civil.

"So on the one hand there's the 'Protect every child is a precious snowflake' attitude that's so easy to make fun of," he said. "On the other hand, these schools are responding to a very real situation that I think it can be reasonably said that the standards of civil discourse are out the window."

"I think clearly in this particular case, they've acted wrongly," said Schweber. "As I've already said, I think the punishment was unduly draconian. There's a good argument that any punishment would be inappropriate — because when a student calls out the WIAA, even using crude language to do so, that is a political message."

It's a message that at least one Republican lawmaker thinks maybe kids need to hear. State Rep. Dale Kooyenga said he was taunted on the court, and he's all the better for it. Kooyenga wrote a protest letter to the WIAA.

"Being on the receiving end of the 'airball' chant ... as an awkwardly tall 6-foot-7 teenager playing high school basketball — that actually built some character and actually made me work really really hard," said Kooyenga.

The WIAA's sportsmanship committee will meet, and possibly review the policy, in April.