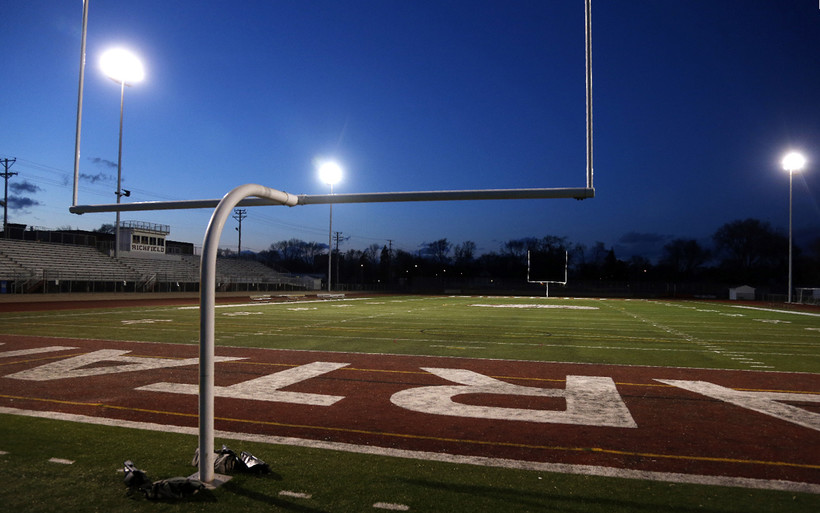 The lights shine on an empty football stadium at Richfield High School Wednesday night, April 8, 2020, in Richfield, Minn. Seeking to brighten spirits amid the virus outbreak, the symbolic act of turning on the lights became a movement — fueled by social media with the hashtag #BeTheLight — across the country. Jim Mone/AP Photo

Public health experts should carefully consider the long-term effects of extended school closures as the coronavirus pandemic continues, according to a researcher at the University of Wisconsin School of Medicine and Public Health.

Dr. Timothy McGuine led a team who surveyed more than 3,200 young athletes across the state in May, about three months after schools were closed to slow the spread of COVID-19. McGuine said they focused on athletes because they had control data from before the pandemic for comparison.

The survey was conducted online and took about seven minutes to complete. The athletes who responded came from 71 different Wisconsin counties and played a variety of sports.

Reports of moderate to severe depression were up by more than 20 percent among those who took the survey in May. According to researchers, this means 66,000 young athletes across the state could be at risk for depression.

At the same time, physical activity was down 50 percent among those who took the survey in May. Exercise is considered a powerful intervention against anxiety and depression, he said.

According to researchers, this is the first data to be shared on the health and well-being of young athletes amid the pandemic. It shows they could face higher rates of substance abuse and lower graduation rates in the short term, researchers said. In the long term, that could mean higher rates of addiction and difficulty forming meaningful relationships or building careers, McGuine said.

"We think that these psychosocial effects will really impact not just these kids now but our health care spending and how we deal with it as a community and culture going forward in the state of Wisconsin," he said.

The worsening mental health and reduced quality-of-life scores reported by student-athletes in May can’t be attributed exclusively to the cancellation of organization athletics, but it’s likely a factor, McGuine said. Increased unemployment and other recent developments could also play a role, he added.

Ultimately, McGuine said he’s not sure if the findings indicate that public health officials should allow for organized athletic activities this fall, but he said they should be taken into considerations. It might come down to individual communities deciding for themselves, he said.

"There’s not a formula that’s one-size-fits-all for all schools, all districts, all counties in the state of Wisconsin, but I think we need to be aware that there’s benefits and risks of continuing these closures and cancellations through the next school year," he said.

Dr. Kevin Walter of the Children’s Hospital of Wisconsin said he finds it reassuring that communities are starting to discuss ways to bring back sports safely this fall, especially as research increasingly shows that children are less likely than adults to contract or spread COVID-19.

The American Academy of Pediatric (AAP) issued a statement Tuesday echoing McGuine’s concerns and advising that in-person instruction should be the goal this fall. Earlier this month, Wisconsin education officials announced their plan for the fall, which includes a combination of classroom and online learning.