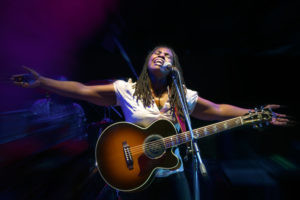 With a long history as a haven for musicians and artists, legends like John James Audubon and W.C. Handy once called Henderson, Kentucky home and discovered their callings on the banks of the Ohio River. Framed by nature, downtown Henderson is a southern river town with historic charm that transforms into a vibrant and bustling festival town that continues to inspire all summer long.

29th Annual W.C. Handy Blues & Barbecue Festival | June 12-15
Three-time winner of Kentucky Living’s Best Music Festival, the festival locals lovingly dub as “Handy Fest” has become widely known as one of the largest free music festivals in the nation, drawing attendees from just about every state and many countries around the globe. The festival is a celebration of the life and legacy of former Henderson resident and “Father of the Blues” W.C. Handy and features a world-class lineup including Chicago Plays the Stones, Southern Hospitality, and Ruthie Foster.

10th Annual Sandy Lee Watkins Songwriters’ Festival | July 24-27
Sandy Lee Songfest features four nights of intimate, acoustic performances in downtown venues turned Nashville-style listening rooms. While sitting in the round, attendees have an up-close and personal experience while hearing stories about how and why their favorite country songs were written from an impressive lineup of Nashville songwriters, including Wynn Varble, Jeffrey East, and Don Sampson.

34th Annual Bluegrass in the Park Folklife Festival | August 9-10
About an hour’s drive from the birthplace of the “Father of Bluegrass” music Bill Monroe you’ll find perhaps the nation’s longest running free bluegrass festival, Bluegrass in the Park, in Audubon Mill Park in downtown Henderson. Two full days of live bluegrass music that boasts its roots right here in western Kentucky, folklife demonstrations, and artisan merchants will keep your schedule laid back but full, and performances by Kings Highway, Five Mile Mountain Road, and The Alex Leach Band will keep you entertained for the duration of the weekend.

The town that inspired John James Audubon, W.C. Handy, and others still inspires the legends of tomorrow— today. Discover the contagious spirit of creativity that continues to prevail, and catch world-class entertainment with a side of southern hospitality along the way.