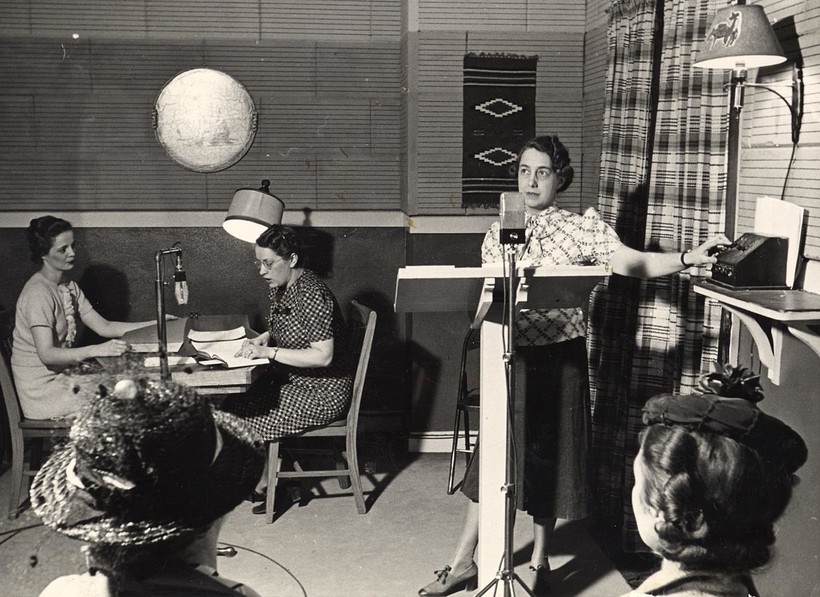 A photo of Aline Hazard in the studio in 1938

From HGTV and the Food Network to Martha Stewart, "Apartment Therapy" and "Domino," Americans can’t seem to get enough cooking, design, home, and just life advice. It's something radio has covered since its early days. Wisconsin had Aline Hazard and the "Homemakers Program."

For 32 years -- from 1933 to 1965 -- Aline Hazard was the driving force and the most recognizable voice on WHA’s "Homemakers’ Program." An authoritative home economist from the University of Wisconsin, Hazard and her colleagues instructed Wisconsin homemakers on how to pickle, prepare frozen food, select a washing machine and countless other household tasks.

The "Homemakers’ Program" filled a communication void for rural Wisconsin women who were often separated by great distances from neighbors. Reaching Wisconsin residents wherever they lived was a major priority for the state’s Extension service and the UW came to depend on WHA Radio as an outlet for sharing information. Hazard served as both a knowledgeable educator on modern homemaking and a trusted friend who helped to form a community among thousands of Wisconsin farm-women.

As host, Hazard saw her program as a way to improve household efficiency by "alerting listeners to [the] finer values and better homemaking methods." Under Hazard’s direction, the "Homemakers’ Program" featured interviews and roundtables with UW specialists and community leaders, who provided household and child-rearing advice as well as introducing new technology.

In 1933, when WHA Radio launched the "Wisconsin College of the Air," Hazard turned the "Homemakers’ Program" into a classroom on Wednesday mornings, offering practical homemaking advice geared toward "young people and adults not able to attend school." Listeners enrolled in the free classes by mail, and in return, received course materials that included a final examination. Hazard encouraged listeners to form "listening groups."

"We want mothers to join the 'College of the Air.' The bigger the radio family, the better it will be. Why not organize a radio club? Invite some girls, who probably do not have a radio at home, to listen with you," she said.

Hazard devised creative ways of delivering information, including, beginning in 1936, a serial drama that recreated the experiences of a typical Wisconsin family in often melodramatic form.  These homemaking dramas, initially called "Air-lanes to Homemaking" and then "Over At Our House" in 1937, imitated the style of radio soap operas, a popular format that drew much the same audience as Hazard’s show, while also offering instruction. Episodes covered a wide range of topics, such as relaxation in the episode Wisconsin Life Weekend recreated titled "Conserve Energy Through Relaxation." 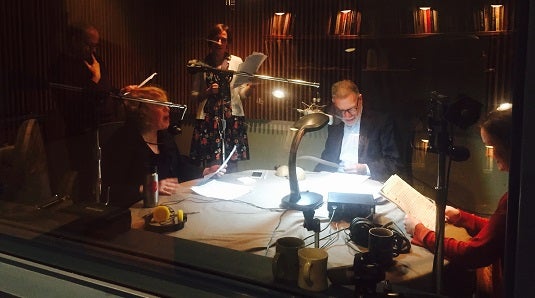 The "Wisconsin Life" Players in action (Photo by Adam Friedrich)

Hazard ended each program with a summary of the major points and lessons. Listeners sent away for free supplementary materials from the show. By 1936, nearly 5,000 homemakers were on the mailing list.

Hazard received thousands of letters a year from listeners, more than any other program on WHA Radio. In 1962 alone, Hazard received more than 10,000 letters, most addressed to her personally. Hazard and her staff took care to respond to each letter, mapping the requests to determine who was listening and what they wanted to know in order to shape program. Over the years, Hazard created additional features, including a "Homemakers’ Radio Book Club" and a regular gardening segment.

The show continued until Hazard’s retirement in 1965.