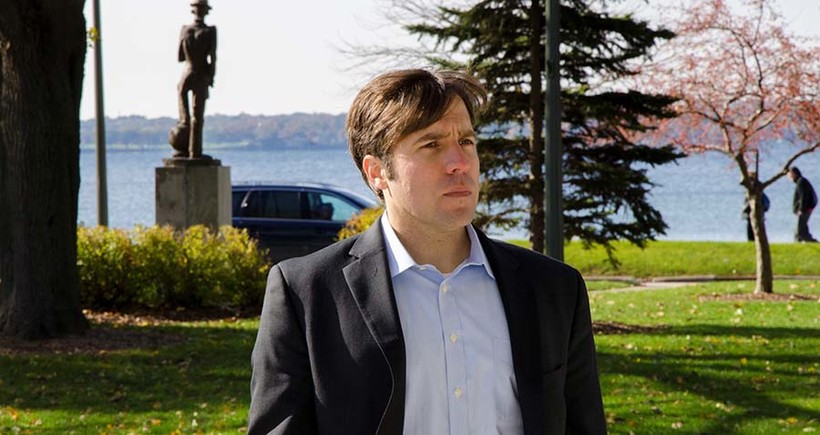 Nick Polce is one of five Republicans vying for the chance to fill U.S. Rep. Paul Ryan’s vacant seat in the 1st Congressional District in Tuesday, Aug. 14's partisan primary.

The winner of the district, which includes Janesville, Racine and Kenosha, will face either Democratic candidate Randy Bryce or Cathy Myers in the general election in November.

When asked what sets him apart from the other Republican candidates — Jeremy Ryan, Paul Nehlen, Kevin "Adam" Steen and Bryan Steil — Polce points to his experience as both a businessman and Green Beret.

Polce recently spoke with WPR's "Central Time" host Rob Ferrett. His interview has been edited for brevity and clarity.

Rob Ferret: What in your background makes you suited to represent constituents in the 1st District?

Nick Polce: Well two things, first is life experiences. Spending time in the military and the special operations community, you work at the highest levels of the federal government and you really get to understand how it is that foreign policy is created, as well as monetary and fiscal policy.

Secondly, as a small business owner you're on the front lines and you feel and you see the laws and the regulations that are passed from our elected officials and you understand how it affects you.

RF: What policy disagreements would you have with Paul Ryan.

NP: Well the first one ... term limits, I think you spend a few years and return back to the private sector. The second thing is on spending, we're spending way too much money at the federal government level. He favors omnibus bills, which I don't think are in the best interests of individual Americans.

On Social Security I don't believe it's an entitlement. I think it's your money that's been taken from your paycheck for decades. And the problem is that we've had elected officials who have been spending that money rather than keeping it where it should be, which is in the Social Security fund.

RF: Are there particular issues in your part of Wisconsin that you think need more attention from the federal government?

NP: Not from the federal government. The number one issue that I hear ... is health care, the costs to health care specifically and what it is that Congress can do to drive down costs and increase care. A few of the things that we can do is ... remove the Affordable Care Act. Second thing is that we can change the tax code which will allow individuals to have the similar tax benefits and tax incentives that businesses have and which would open up the market and allow a lot more increased freedom and increased access.

RF: Can you tell us what you want to do when it comes to immigration and Congress.

NP: Immigration has to begin with border security. So the first thing we got to do is we got to get the wall funded and then we also have to work on some of the laws that are not in the interests of American citizens.

Related to legal immigration is the bureaucracy and ... the length of time it takes for people to do it the right way. The second thing is some of the visa processes … specifically here in Wisconsin, agriculture and dairy in particular requires year round help. And we don't have anything right now on the federal books that supports that industry.

RF: Talking about jobs and the economy, what kind of priorities would you have there.

RF: Staying with the economy, tariffs have been front and center in the news.

NP: The president, I believe, has taken action on what he talked about in the election on using tariffs to negotiate the ultimate end state, which is a NAFTA treaty that's more favorable to Americans and American businesses.

RF: Some Wisconsin business people have said, 'Hey, wait a minute, these tariffs are hurting our exports.'

NP: When you have these managed trade agreements there's going to be winners and losers and the businesses now that have built up around, for example that NAFTA treaty ... have been successful. So if we're going to start now changing some of the rules and the regulations and renegotiations of that treaty, those businesses that … built markets, they may end up being hurt.