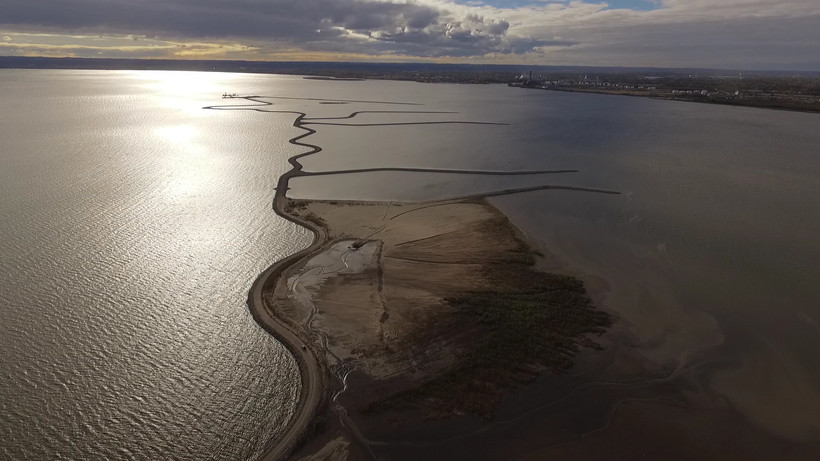 A view of the Cat Island restoration work. Wisconsin Department of Natural Resources

The Cat Island Chain of barrier islands once provided one of the largest and most diverse wetland ecosystems in the Great Lakes. But years of high water levels in the 1970s, coupled with spring storm surges and ice damage, nearly destroyed the fragile islands.

Now, after years of planning, an ambitious vision to restore the barrier island chain is taking shape in Green Bay.

"They helped with protecting a lot of our wetland ecosystem that was in the bay of Green Bay," said Josh Martinez, a wildlife biologist with the Wisconsin Department of Natural Resources. "We used to have one of the largest shallow water habitat areas in the Great Lakes."

According to the DNR, 90 percent of coastal wetlands had been lost from southern Green Bay by the 1970s, dealing a major blow to habitat for waterfowl, migratory birds, fish and other species that depend on marshy habitat.

The barrier island restoration developed from a larger remediation plan for the lower Green Bay, created nearly 30 years ago to clean up and improve the watershed.

"It’s been a very long planning process because it’s a very large area of work they’re going to be doing," Martinez said.

When it’s finished, the $27 million, 20-year project is expected to restore more than 1,200 acres of shallow water and wetland habitat.

Since construction began in 2012, crews have built a 2.5-mile wave barrier that juts out into the bay, with side dikes that form the edges of three islands in the chain. Clean sand and sediment dredged from the shipping channel north of Long Tail Point is being pumped into the Cat Island area, and the effort has already begun to create a new haven for migratory birds, Martinez said.

"That’s the biggest improvement we’ve seen out there. We’ve seen 30 different species of shorebirds, so it seems to be a very, very good spot," he said.

Martinez pointed to the return of piping plovers to the area, calling the species the "poster child" for the restoration.

The area is off-limits to individual birders, Martinez said, though birding groups can ask for permission from the Cat Island Advisory Committee, which is overseeing the creation of the Cat Island Chain.

But, Martinez said, limiting public access to the area is a critical part of creating a sustainable habit for piping plovers and other shorebirds.