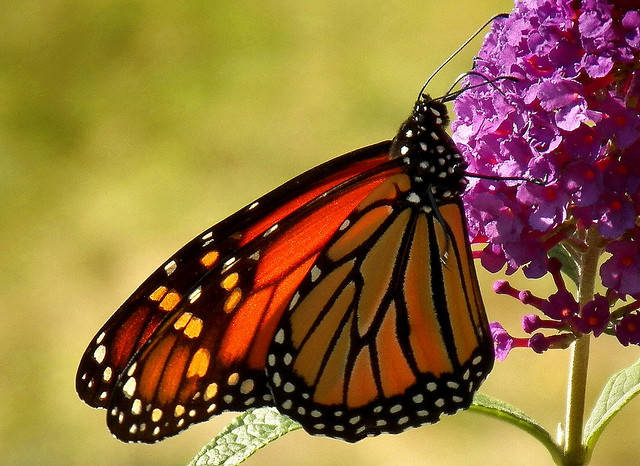 Habitat Is A Challenge For Some Wisconsin Butterfly Species

At least three species of butterflies could be in ecological trouble in Wisconsin.

About 150 species of butterflies can be found in Wisconsin, but scientists and activists warn that some of the butterflies are already listed as endangered and others may be headed toward that designation.

In the Scuppernong Prairie Natural Area, southwest of Waukesha, endangered species biologist Phil Delphey hiked through the native grasses and flowers, on the lookout for butterflies.

But Delphey, with the U.S. Fish and Wildlife Service, really joined a team of butterfly surveyors from the Wisconsin Department of Natural Resources and other agencies to look for the Poweshiek skipperling. It's a small butterfly, with a mix of gray, brown, orange and lavender coloring.

Last fall, the Poweshiek went on the federal Endangered Species List. Delphey said about a dozen years ago, biologists started noticing a major decline of the insect in its typical range across the upper Midwest.

"Something just you know pulled the rug out from underneath the species," he said. "Even in places where the habitat looks great. Its nectar plant is still there. The larval host plant is there. It's just gone."

Delphey said there are various hypotheses, including that pesticides being sprayed nearby are blowing onto the prairie remnants where the Poweshiek skipperling used to be found. But, he said there's nothing that can be proven yet. Delphey and the DNR said no Powershieks' were found during a half-dozen surveys at Scuppernong last week.

Another endangered butterfly, the Karner blue seems to be doing better in Wisconsin, enough so that the annual Karner Blue Festival is still on for this Saturday in Black River Falls. And in May, one man mocked the insect's protected status by appearing to eat a Karner blue, during a YouTube video.

But, scientists said there could a new threat to the Karner blue, in the southern part of its range, in northwest Indiana. Notre Dame University Professor Jessica Hellman said at the Indiana Dunes National Lakeshore that gradually warming temperatures may trigger the need for habitat adjustments for the butterfly.

"We talk about, 'Do we need to do some habitat creation on more northerly slopes that would be cooler?'" she said. "It sounds like I am being evasive, but these are exactly the questions we struggle with on a daily basis."

Hellman said Karner blue butterflies in Wisconsin could also be harmed if the weather is consistently hotter, or there are more intense storms.

Traffic is often intense along part of U.S. Highway 45 in Milwaukee County, but just yards away is one of the migration routes for the monarch butterfly. The federal government is considering adding the monarch to the threatened species list, and Barb Agnew, of the Friends of the Monarch Trail, said there's good reason for that deliberation.

"For someone who used to be awash in monarchs and different butterflies, I get so excited now just to see one," she said. "It's very strange."

Agnew has been working with developers who are putting up buildings on the county grounds, as well as the state Department of Transportation and others to try to protect what's left of this monarch stopover point and improve it. Agnew said volunteers are planting milkweed plants and finding other ways to step up.

"There's enough momentum, enough energy, enough passionate people who are concerned that are going to help us physically, financially, whatever, to make this happen," she said.

The Obama administration may decide by next year, whether to help activists like Agnew and add federal protections for the monarch butterfly.