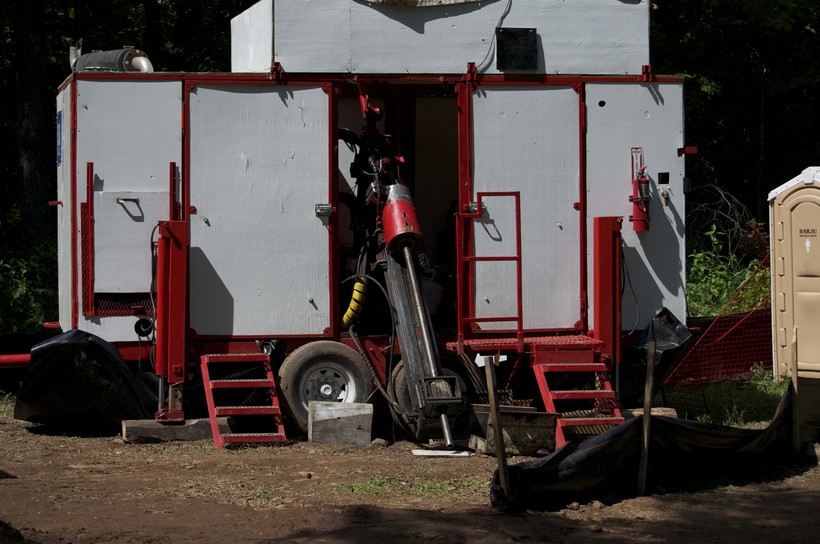 Sheriff Tony Furyk tells Wisconsin Public Radio that there has been damage to the drill, and that his department is taking statements and interviewing GTAC drill site workers. He says the company is alleging that a part of the drill has also been stolen.

A Tuesday morning raid by protesters on the drill site in a secluded area of the Iron County woods resulted in what law enforcement says was a verbal, non-physical, confrontation. Furyk expects charges to be brought as early as tomorrow.

"They damaged some of the hydraulic levers, slashed some tires, discharged a fire extinguisher, pitched tools into the woods...That kind of damage is up there. It didn't stop us from beginning drilling."

The damage supposedly happened after about a dozen people came out of the woods 9:30 on Tuesday morning. Said Seitz:

"They ran in, dressed in black, their faces wrapped in a turban. The people up their said it looked like al Qaeda. They yelled profanities and threats."

"Absolutely not," says Bill Heart with the Penokee Hills Education Project - which opposes the mine - in reaction to Seitz's description. He was on the drill rig site half an hour after the incident and knows people involved.

"The people I saw, I knew a couple of them. Some of them were wearing black jeans but they were clean-cut kids, most of them. And I call them kids because they're probably in their early 20s. Calling them a terrorist is kind of laughable."

Heart says this small group made mistakes by damaging equipment and scaring workers. He says none are part of the nearby LCO Harvest Camp or are tribal members.

On Saturday, protesters will walk to the rig. Seitz doesn't expect a repeat of Tuesday's trouble: "As long as we can keep separation between them, we have no problem with protesters coming out."

Ros Nelson of Washburn is organizing the walk through the woods. She says it will be a family event but people should be prepared:

"Bug spray for sure. It will be about a three-mile walk. And it's not a protest, it's not a march, it's not a show of antagonism. I think the better word would be witness."

Drilling began yesterday and will take several days to complete.

Note: This story has been updated with more information from the 4:30 p.m. broadcast.