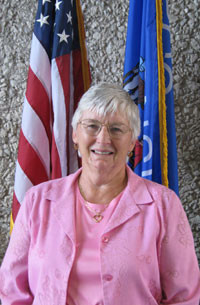 A Tea Party group says they have more than enough signatures to initiate a recall against the La Crosse City Council president.

Restore La Crosse Committee Treasurer Greg Luce says he cannot take two and a half more years of Audrey Kader as City Council President. A number of her votes have upset the group, including changes to the public comment portion of Council meetings. Luce says he wants to get someone else in office. "We're looking for somebody that doesn't believe that government should be in every aspect of the citizens' lives. Like, what kind of trash cans they have, if they have lids on them or not. What kind of signs they believe are attractive for businesses, arbitrary nonsense like that."

The City Council recently passed an ordinance that places standards on signs in La Crosse. Luce says this could be the tip of the iceberg for recalling council members. "This one's gone over with such fanfare that you can't rule out having more."

Audrey Kader says despite the criticism, she will continue to vote with her conscious. "I have served my district well and I've served the city well and I will entrust that the voters who really know what I've done to serve this district will come out to support me."

The Restore La Crosse Committee has yet to file the recall signatures with the City Clerk.

According to the League of Wisconsin Municipalities, it is rare to recall council members, but it can happen. Last year, the three members of the Forest Town Board were recalled after approving a wind energy project.