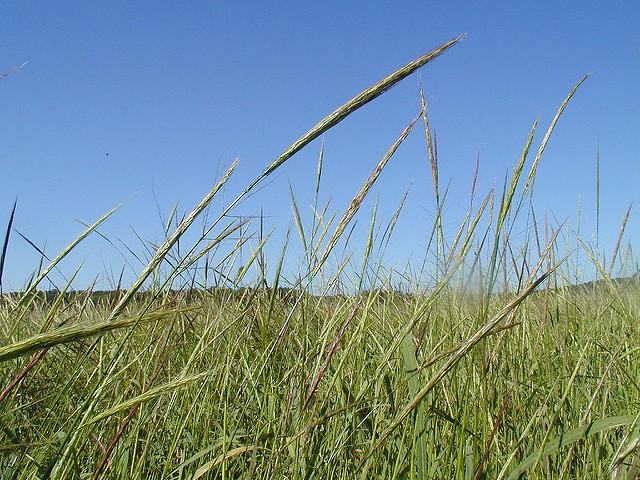 The waters around Green Bay are being fed wild rice seeds this week in an effort to combat below-average wild rice levels and restore habitats for fish and migrating birds.

The University of Wisconsin-Green Bay, along with Ducks Unlimited and the Wisconsin Department of Natural Resources, are seeding about 2,000 pounds of wild rice along 39 acres of coastal wetlands from the lower Bay of Green Bay up to Marinette in the project's third year.

Wild rice crops have struggled for years in northern Wisconsin, largely due to heavy rains and high water levels.

Not only does the native aquatic plant provide benefits for fish and wildlife, it is also a significant cultural and nutritional plant for people, said Amy Carrozzino-Lyon, Green Bay restoration project coordinator at UW-Green Bay.

"It’s a very important plant for many Native American tribes and particularly those here in Wisconsin," she said. "It’s been recognized the important value that the plant has for nourishment of both people and wildlife."

Restoration projects typically seed for at least three years in a row to establish the plants and account for environmental and weather variability in the crop, Carrozzino-Lyon said.

"We've seen quite the variety of success," Carrozzino-Lyon said. "We have several sites that even just after one year of seeding have been very productive … we have some other sites that maybe face a few more challenges."

Seeding wild rice is straightforward, Carrozzino-Lyon said, the seeds are tossed into the water and essentially left alone to grow.

"It's really important for the seed to get into the sediment now in the late fall so that it has an opportunity to cold harden over winter and that will help to stimulate germination next spring," she said.

Restoring Green Bay’s ecological balance is important for waterfowl, particularly dabbling ducks, who rely on wild rice for food in the late summer and early fall. But lesser known is the role wild rice plays for fish, she said.

"Wild rice contributes structurally to diverse wetlands that support a lot of fish, including many of our important game fish here in Wisconsin," Carrozzino-Lyon said. "It also provides nursery habitat for young fish, which is particularly important from a management standpoint."

Researchers are currently working on a waterfowl monitoring project at some of the wild rice restoration sites to gauge the effectiveness of the program, she said, as well as looking to other restoration opportunities around the bay, such as enhancing diked wetland restoration sites to improve fish and wildlife habitat.